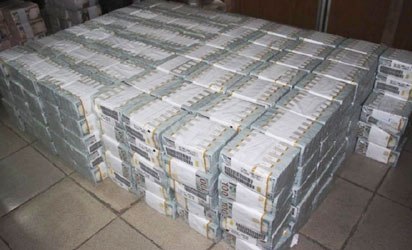 President Muhammadu Buhari during the Nigeria 25 economy summit, stated that few individuals in 4 to 5 states including the FCT hold the country’s wealth leaving over 150 Nigerians population in the remaining states languishing in abject poverty. President Buhari’s statement coincides with the Oxfam shocking revelation of the increase of poverty in the land from 89 million to 94 million as captured by the world poverty clock. Although President Buhari neither mentioned the names of those individuals and the states they live nor the sources of their wealth, his statement has puzzled many Nigerians and put them guessing. The millions of naira questions begging for answers are: Who are these individuals? What are the sources of their stupendous wealth?

Even before the return of democracy in 1999, Nigeria was a country with a high rate of income inequality with the country’s wealth concentrated in the hands of few elites. These few elites normally made their fortunes in government. They were once public servants who worked in government or are highly connected to the ruling elites. They own oil wells and investments in the petroleum industry, power, telecommunication and any lucrative business they can lay their hands on. Yes, they have corruptly enriched themselves through the abused of office or dispersed favor to their friends, families, and cronies. Is Buhari referring to these categories of people? Or is Mr president referring to our entrepreneurs, business moguls, and captains of industries who own and control our manufacturing industries? For instance, the likes of Dangote, Otedola, BUAs e.t.c.

These are industrialists whose services are being felt by the common man in different ways. Through their manufacturing industries, they provided goods and services to the Nigerians and by extension create employment opportunities to our teeming unemployed youths.

If only a few individuals in a few states own the country’s wealth and the vast majority of Nigerians live in poverty as stated by Mr president, it means something is wrong somewhere. What are the causes of this high level of income inequality in the country? The answers to this question are not far-fetched. Firstly, the way and manner with which corruption is entrenched in our national lives have contributed tremendously towards widening income inequality and promote the widespread poverty in the country. Secondly, there is the cases elitism where few individuals hijacked and cornered the resources mean for the development of the country. The high rate of poverty being experienced in the country can not be unconnected with how some few individuals stole the country’s dry.

I think, if the few individuals’ wealth is tied to, or attached to the proceeds of corruption, Buhari’s administration which came to power under the mantra of fighting corruption, should quickly bring them before the law of the land. If the illegal acquisition of wealth happens in advanced countries of the world that abhor corruption, these few individuals or culprits must have cooled their feet in jail or have joined the firing squad. Sadly, our corruption-fighting institutions are weak so our laws. No wonder, these corrupt elements become untouchable in the country and continue to undermine our peace, unity and socio-economy development.