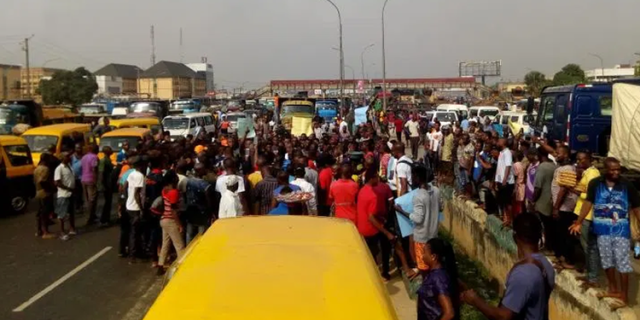 Tricycle operators in Ughelli town in Delta State are protesting against the State Government’s decision to ban them from operating along the highways and arrest of their members by the police.

The protest which had started this week, saw the Keke operators block major roads, complaining of what they called government’s insensitivity to their plights.

According to some of the protesters, they got to know of the directive from the government, only for the police to commence arrest of those plying the said highway.

A tricycle operator, Prosper Oghenetega revealed that most of the communities where they come from are located on both sides of the highway, expressing the fear that the task force and the police might take advantage of the law to arrest any tricycle operator driving through the highway to the other side.

“The information got to us a few days ago that no Keke should ride on the federal highways. Just today, police started arresting our members while Keke are still operating between Agbarho and Warri, which is a highway. Most of us come from the surrounding villages such as Affiesere, Ofuoma, Agbarha-Otor and others which are located on the other side of the highway. Others come from places like Evwreni, Ewu and Edjekota. The question is, how do we operate in Ughelli without going through the highway,” he queried.

He appealed to the State Governor, Ifeanyi Okowa to see Ughelli as a special case, stressing that Keke was a major means of livelihood in and around the town because of the bad roads which government has failed to do.

Another operator who joined the protest, who spoke on the condition of anonymity, regretted that the ban will plunge them into debt and serious economic crisis.

“As a matter of fact, many of us took our tricycles on a higher purchase arrangement and have to balance about N1.2 to about 1.3 million as the case may be. If you deprive them of operating in some of these routes, it might spell doom for them. The government may even be sending these youths into crime without knowing because someone that can no longer fend for himself genuinely may want to look for other means to survive. This could result to the breakdown of law and social upheaval in the state if consideration is not given to us,” he said.

Other operators who spoke with our correspondent, were of the opinion that the state government should have a rethink on the ban, considering the economic situation of the country, negatively affected by COVID-19.

Comrade Ayonuwe made the appeal today in his office when TNC contacted him to understand the true situation of things.

He disclosed that the tricycle operators had protested to his office and he told them that there is a law banning their operation on the highways in the state but assured them that through dialogue, the matter could be resolved amicably, stressing that every law had a human face.

Comrade Ayonuwe said that to salvage the situation, he led the protesters to the Ughelli Divisional Police Officer, (DPO) Ughelli A Division where arrangement for the release of some tricycle operators previously arrested for various offences was made.

While urging the Keke operators to be law-abiding, Ayonuwe described the Delta State Governor, Senator Ifeanyi Okowa as a man with listening ears, who would do everything to see that no one was oppressed, assuring them that the association would engage the state government in a robust dialogue whereby both parties would be satisfied.