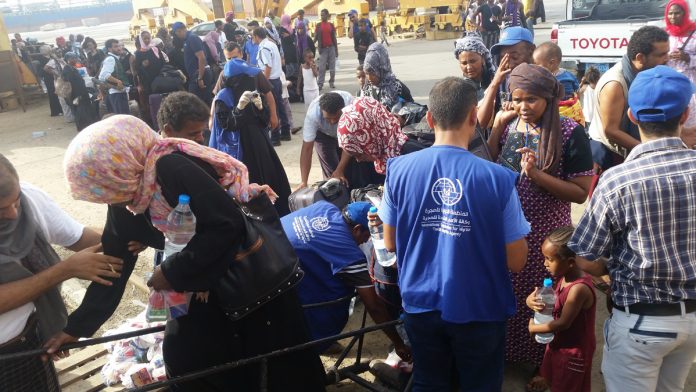 Wilson Johwa, is a Regional Communications Officer at the International Organisation for Migration’s (IOM) Regional Office for East and Horn of Africa in Nairobi, Kenya. They set off early from Addis Ababa, on Monday, last April 8, on a mission to reunite seven teenagers with their families.

All of them are former irregular migrants who have voluntarily returned to Ethiopia, their country of origin.

Although unaccompanied minors are among the most vulnerable migrants and are always accompanied by a social worker on these re-unification missions, the actual process of re-unification with their parents and guardians has become a routine act. IOM takes them home, often a day or more away from the capital.

As they travel by road to their localities, all seven boys on this particular trip open up and share their harrowing experiences.

Six have come from Djibouti — the main transit country traversed by Ethiopian migrants aiming to reach Yemen and then Saudi Arabia — while one has returned from conflict-ridden Yemen. All have spent a few days at the IOM-run Migrant Transit Centre, adjacent to Addis Ababa’s Bole International Airport.

They pass small towns in Oromia, the largest region in the country, and experience rural Ethiopia, the very communities from where many make the decision to emigrate. Neat houses line up on both sides of the highway, with minarets and the occasional church frequently breaking the eye-line.

Livestock — mainly cows and goats — cross the busy highway with much more frequency than humans. There are also motor bikes and ‘bajaj’, the ubiquitous three-wheelers — clearly the main means of local transportation and also the most popular local business, in addition to restaurants and coffee stands.

Ethiopia, which has a population of over 100 million people, also accounts for the largest movements of irregular migrants in the Horn of Africa. Most irregular migrants from the country are young, come from farming stock and are early school drop outs.

On the second day, they said goodbye to four of the boys at Omo Nada in the Jimma Zone where by prior arrangement their guardians are there to meet them. The advance preparation by IOM, which takes a couple of days, includes family tracing conducted by social workers from the government Bureau for Women, Children and Youth Affairs (Bowca). Among these social workers is Kasahun Worku, my companion on the trip.

The re-unification of all seven boys must be happen under the auspices of the Department of Women and Children in Oromia. This is in line with the working arrangement between IOM, UNICEF and Bowca.

Facilitating the return of the seven is the Joint Initiative for Migrant Protection and Reintegration in the Horn of Africa, launched in December 2016 with funding from the EU Emergency Trust Fund for Africa (EUTF). It is the first comprehensive programme of its kind to save lives, protect and assist migrants along key migration routes in Africa.

The programme covers and promotes close cooperation among 26 African countries in the Sahel, Lake Chad, North Africa and the Horn of Africa regions.

Back in Oromia, Yusuf hugs his mother, Bultu, who cannot hold back her tears when they reunite. It has been two months since they last saw each other. They are meeting at the Women and Child Protection offices in Gatira town in Jimma Zone, more than a day’s drive from Addis Ababa.

Bultu says she was the only who knew when her 17-year-old son left home. Her husband was unaware. “We’re living in extreme poverty. I took it (his emigration) as a solution to our situation,” she says.

Bultu has three other children, all girls. She’s also the breadwinner, as her husband cannot work — he is a TB patient. The family has no farmland. All they have is the patch of a land where their house stands, she says. What little money they get comes from her cultivation and sale of khat, a stimulant plant.

I’m so happy because he came back safely but I still have the same problem: What will I do for him?,” asks Bultu. She is certain on a couple of things though. “I don’t want him to try to emigrate again. I want him to go back to school.

However, the family simply does not have the money for this. Even the three girls are not in school, Bultu says. She fears that unless Yusuf does not get into an activity he will again try to leave the country irregularly.

Misganu Guddina, the protection officer overseeing the reunion says the district receives many returnees, mostly from Yemen, Saudi Arabi and Djibouti. But there is no material assistance from the state to help them make a fresh start.

“When they ask for reintegration assistance we tell them to teach their neighbours about their suffering away from home, and to be strong in working to show us that they can change their lives in their country,” says Guddina.

Yusuf says he experienced a lot of hardship in the two months that he was away, such as hunger and sleeping outside in the bush.

I am very disappointed in being back without achieving my goal,” he says. “I want to be involved in a trade but I have nothing to get me started…If I can get this, I can change my life and my family’s prospects.

From Omo Nada, off we go, spending the night in Jimma town, the centre of one of Ethiopia’s major coffee producing zones, before proceeding the following morning to Gatira. We drop off Nazimo (17). The night before he had told us of how, along with several peers from his neighbourhood, he went to Djibouti with the intention of proceeding to Yemen.

From the onset he had enlisted the help of a smugglers’ network, in his neighbourhood, getting the assurance that he would be assisted in his journey. But along the way, having paid money to get into Djibouti, he and his group were abandoned by the smuggler.

Nazimo says he got as far as he did after selling his mother’s cow, without her permission. Now his dream is to pursue an education and also assist his mom, a widow.

The last of the seven boys, Sali (16), has an even more harrowing story of struggling in Djibouti where he and a small group were passed on from one smuggler to another, hidden away at the back of a truck by the driver and put to work by villagers in return for food.

Still, Sali made it to Yemen but soon sought to return home due to the extreme conditions he faced. His plan now, is to resume his education. But since school is several kilometres away, he wants to work and earn money to buy a motor bike that he will use to get to school and also to earn money.

We leave him in the care of his aunt who has come to meet him. It turns out that his father now lives elsewhere with a new wife and a young family. It also emerges that Sali’s 14-year-old brother, with whom he had travelled, is still in Yemen.

Fanose Degefa, the head of the women and child protection office, summarizes the reasons for the youth emigration in her area as poverty, single parent households with several children — like Sali’s — and peer pressure.

Indeed, the biggest pull factor for migrants is someone in their neighbourhood who has made it, says Worku, my travel companion.

For four years Worku’s work has centred on assisting returning migrants. Among his duties is tracing the families of the returnees — including those of the seven boys we have just taken home. “It’s not easy, sometimes the phone (belonging to returnee’s guardian) is not working.”

However, the breakthrough is usually provided by the local Bowca representatives, such as Guddina and Degefa, who can locate the family and connect them to the returnee.

Worku constantly imagines that some of the returning migrants he assists will re-emigrate. Although this is common, it does not preclude further assistance under the Joint Initiative.

In fact, on separate occasions, he has handled the return of three people, twice. This means on two occasions they have sought assistance from IOM to return home.

Kasahun says as long as the returnees have financial problems, emigrating remains an option.

“The main reason for migration in Ethiopia is financial problems. If these can’t be solved, they will re-emigrate,” he says. However, some of his most satisfying moments are when he witnesses tears of joy when families re-unite.

Sara Basha, the coordinator of the Joint Initiative in Ethiopia, explains that the seven teenagers will be supported in line with the programme’s protocols. Reintegration support starts with post arrival assistance offered to returnees at the Transit Centre.

Migrants are provided with temporary accommodation, hot meals, general medical screening, psychosocial counselling and specialized medical follow-up for those with specific medical needs. Family tracing also happens at the Transit Centre with the support of social workers — like Worku — assigned by the government.

Family tracing process usually takes between seven to 10 days. The reunification of the minors is also undertaken by the social workers. IOM’s most preferred reintegration support for minors is to enroll them all back in school. However, this is not always feasible for the case.

In terms of the law in Ethiopia, adolescents aged 14 years and above can engage in economic activities. “It is often difficult to convince returnees between 14 and 18 years to go back to school. A lot of them drop out of school even before they migrate and are not interested in going back to school,” Basha says.

Meanwhile, as October 2018, out of 2,500 returnees assisted by the Joint Initiative in Ethiopia, 22 per cent were minors. Of the same 2,500, 33 per cent went only as far the third grade while 48 per cent had education level between fourth and eighth grade.