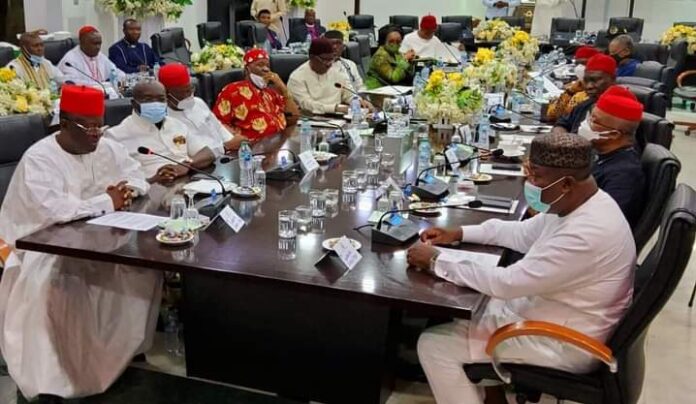 Southeast Governors and Stakeholders have resolved to set up funds to assist families that lost persons in the recent violence that trailed the ENDSARS protests across the region.
This was contained in a communiqué issued by the Southeast Governors Forum after the first day of a two-day closed-door meeting, organized by the forum in collaboration stakeholders in the southeast geopolitical zone at the Enugu State Government House.
The meeting was to strategize on how to make the zone better for the residents in the light of issues raised by youths in the zone during the recent EndSARS protest, and unrest across Nigeria.
The two day meeting which is to end on Friday, the 30th of October 2020, is being attended by the Enugu State Governor, Chief Ifeanyi Ugwuanyi, that of Abia, Dr Okezie Ikpeazu, Governor Willie Obiano of Anambra state, represented by his deputy, Dr Nkem Okeke, and Imo state Governor Hope Uzodimma also represented by his deputy.
Others present at the meeting include the Minister of State for Environment, Dr Sharon Ikeazor, Senator representing Anambra Central, Senator Uche Ekwunife, former governor of Imo state, Senator Rochas Okorocha, Senator Ike Ekweremmadu, the Obi of Onitsha, who is Chairman Southeast Traditional Rulers Forum, Igwe Nnaemeka Achebe, President of Ohaneze Ndi Igbo Worldwide, Chief Nnia Nwodo, old Anambra state Governor, Chief Jim Nwobodo, among others.
Reading the communiqué, the Chairman, Southeast Governors Forum, Engr Dave Umahi of Ebonyi state, explained that southeast governors are committed to addressing the concerns of the young people that are peculiar to the state governments, and will engage the federal government to handle other issues that are national.
He urged Ndi Igbo in other parts of the country to go about their lawful businesses and to avoid any form of unlawful protest and criminality. 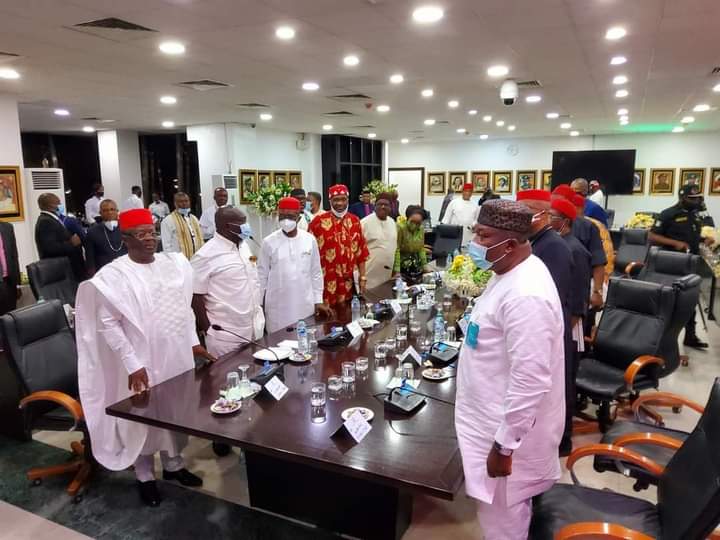 “The Southeast Governors Forum Chairman wishes to express its sympathy to families that lost their loved ones and property in the protest, including the police, other security agencies, and civilians,” he said.
The communique also assured that southeast leaders will engage the youths to ensure sustainable peace in the zone and a glorious future for the upcoming generation.
“It is however important that youths in the zone remain law-abiding while the governors work hard to meet their demands. Southeast governors will not allow the onward killing of security agents, civilians, and destruction of public and private property,” he said.