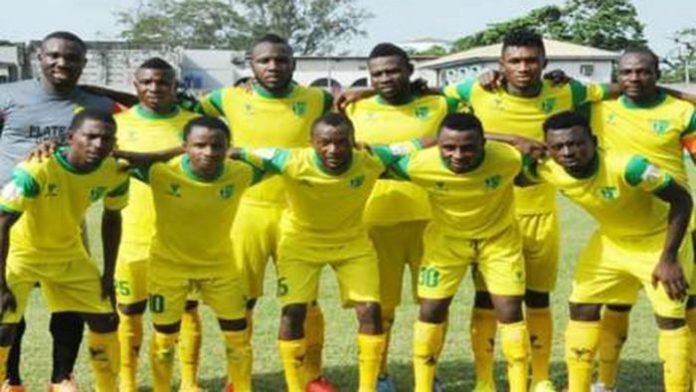 The Plateau State Football Association, PFA has debunked rumours that there is a rift between the football association and management of the state-owned Premier League side, Plateau United FC.
A statement signed by the PFA Chairman and Secretary, Sunday Longbap and Sunday Etsi respectively and made available to newsmen in Jos, the Plateau State capital claimed the rumours were the handiwork of mischief makers who do not wish well for football.
“We, therefore, advised anyone whose stock in trade is causing disunity and disaffection through fake news in order to gain relevance or cheap publicity to device other means and not through cheap blackmails”.
“We, therefore, expressed optimism in the ability of Plateau United in representing Nigeria well in the continent (CAF Champions League)”, the statement read in part.
The association maintained that it duly congratulated Plateau United FC recently through various mass media outfits when the Jos side was declared Champions of the 2019/2020 League Season by the League Management Company (LMC) when it became obvious that the league could not be concluded due to the effects of COVID 19.
It then wondered why it would make a u-turn weeks later to cast aspersions on the club and its management having congratulated them when they emerged champions just few weeks earlier.
It then used the opportunity to congratulate all Muslim Ummah in the state and country at large for peaceful and prosperous Eid celebration.
“We pray that the Holy Celebration of Eid-Kabir Mubarak will be celebrated in peace and further unite the people for a peaceful, prosperous and United Nigeria irrespective of our differences”, the association added.
It would be recalled that Plateau United FC was declared Champions of the premier league in Nigeria through a ballot that saw club owners casting votes during a virtual meeting to declare them champions on Point-per-Game rule.
This development was not without rancour from premier league sides like Lobi Stars of Makurdi who kicked against the unanimous decision of the club owners to award the shield to Plateau United on the rule thereby making them one of the sides to represent the country in next year’s CAF Champions League.