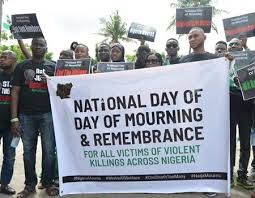 The Joint Action Civil Society Coalition has raised alarm over the spate of violence and mass killings going on in parts of Nigeria.

The group raised the alarm yesterday as it enjoined all Nigerians to join in the commemoration of the third National Day of Mourning on May 28, 2020.

Nigeria has continued to experience an exponentially rise in violence, perpetrated by organized criminal groups with a monumental loss of lives, livelihoods, and property.
For the most part, the destruction associated with this spiralling crisis of violence and mass killings has been grossly under-reported.

Speaking to newsmen on behalf of the group, the Executive Director, Global Rights, Abiodun Baiyewu said even with the suppression of information on these killings, it was quite clear that the toll of killings has risen dramatically in recent times.

“Between 2018 and now, we have recorded the deaths of at least seven thousand nine hundred and four Nigerians to violent killings across the country; with the first quarter of 2020 alone making up about one thousand four hundred and sixteen of these deaths. From Akwa-Ibom to Zamfara, Nigerians wake up daily to fresh news of mass atrocities which are barely acknowledged by the government and a vast majority of fellow citizens.

“Boko Haram continues to terrorize, killing thousands of Nigerians going about their livelihoods. In parts of the North-West, vast swathes of ungoverned territory have been taken over by rustlers, bandits and vigilantes whose preferred currency is blood. Extrajudicial killings and human rights abuses by state security personnel have been on an alarming high, in nearly all the states where the Covid-19 lockdown measures were enforced. This anomaly must stop,” Baiyewu maintained.

She regretted that there has been no accountability for these killings, adding that the pervasive impunity and frequency of violent killings in Nigeria are of grave concern to citizens.

According to her, these killings have also given rise to mass displacement as well as created civic, humanitarian and food security crises.

In her words, “The chronic mass killings across Nigeria have become a blot on the collective conscience of our Nigerian humanity. As a country, we seem to have normalized the violent killings of our citizens. Reports have reduced human lives lost to mere numbers that are bandied and argued about without thought of properly accounting for them or according to the dignity, by naming them.”

The rights group opined that Nigeria’s 1999 constitution made it clear that the primary purpose of government is the safety, security, and welfare of all who live within its territory.
It regretted that while Nigerians are being killed and livelihoods laid to ruin, the government has shown itself unwilling or unable to confront these killings to put an end to them.

By so doing, the group noted, the government has abdicated its constitutional duty to guarantee the safety, security, and wellbeing of all who live within Nigeria’s geographical boundaries.

“Our leaders have fueled the embers of mistrust, ascribing their failure to protect lives and property to ill-founded narratives of ethnic, partisan, and religious mischief.
“Rather than demand accountability and responsible leadership, citizens have been incited to turn on one another; instead of acknowledging and being united by the fact that we are all victimized by all of these, citizens and communities seem to be in a race to prove who has suffered more from the killings,” it said.
The group, therefore, demanded that the executive and legislative arms of government take measurable steps as follows-

“End the impunity that has led to the spiral of the conflict in the regions by immediately ordering of a full investigation into the killings to fish out and bringing the perpetrators of the crisis to justice;

“Ensure the provision of humanitarian aid and assistance to communities displaced by the crisis;
“Take essential measures to combat the proliferation of small arms and light weapons across the region and their further inflow into the country and,
“Ensure an urgent accounting of the missing and dead, and an estimation of the loss incurred by individuals and impacted communities.”

It furthermore called on all concerned Nigerians to join the commemoration of the National Day of Mourning and Remembrance for all victims of violent killings across Nigeria, to memorialize all who died and demand for government’s responsibility to its citizens, and justice for every victim of mass atrocities.

“The National Day of Mourning and Remembrance will be marked by a series of symbolic actions which include speaking out on social media to demand accountability of government for the security and welfare of all Nigerians as enshrined in section 14(2)(b) of the Nigerian constitution and use the hashtags: #NotAtWar #NDOM20 #NDOM2020.

“Citizens should observe a moment of silence at noon on May 28, use the NDOM Virtual T-shirt as your DP on Social Media, read/list out the names of victims of mass atrocities in your states on social media and electronic media, wear black and invite others to do the same,” the group noted.