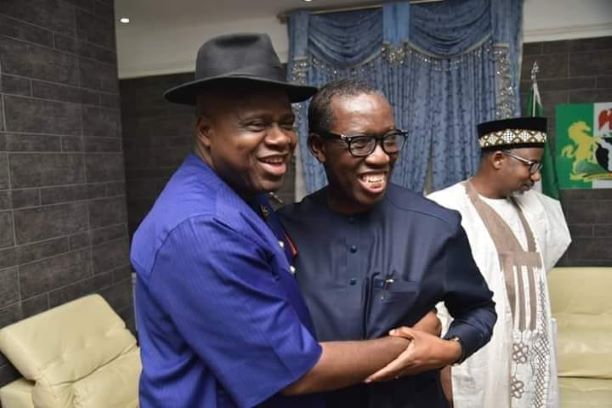 Gov. Ifeanyi Okowa of Delta has congratulated his Bayelsa counterpart, Sen. Douye Diri, on his victory at the Appeal Court on Friday.

Ochoa’s congratulatory message was contained in a statement issued in Asaba on Saturday Mr Olisa Ifeajika, Chief Press Secretary to the Delta governor.

The Delta governor noted that the Governorship Election Petitions Tribunal, which nullified Dari’s election earlier, ought not to have entertained the petition in the first instance as it was a pre-election matter and was status barred.

He commended the INEC for acting well on the matter as the petitioner, the Advanced Nigeria Democratic Party (ANDP) indeed, failed to present a qualified candidate for the election.

He also commended the five-man panel of the Appellate Court for overturning the ruling of the tribunal.

According to the governor, the judgment of the appellate court on the matter is a victory for the nation’s democracy and a reaffirmation of the powers of INEC to act as an unbiased umpire.

“I welcome the judgment of the Court of Appeal, which sat in Abuja on the Bayelsa governorship election petition with immense joy and also appreciate the judiciary for doing justice to the matter.

“This ruling has once again reaffirmed the powers of INEC to act as an unbiased umpire, especially in dealing with issues of improper nomination by political parties.

I must commend the courage and sagacity exhibited by the five-man panel of the court which ruled that the ANDP failed woefully to show that it had a valid candidate that was unlawfully excluded by INEC.

“On behalf of my family, the government and people of Delta, I congratulate my brother governor, Sen. Diri, on this victory.

“The case was a needless distraction as the election petition tribunal ought not to have entertained the petition because it was a pre-election matter and was also status barred.

`” This victory is for all Bayelsans, and I urge the ANDP to sheathe its sword and work in the interest of the people of the state,’’ the governor said in the statement.