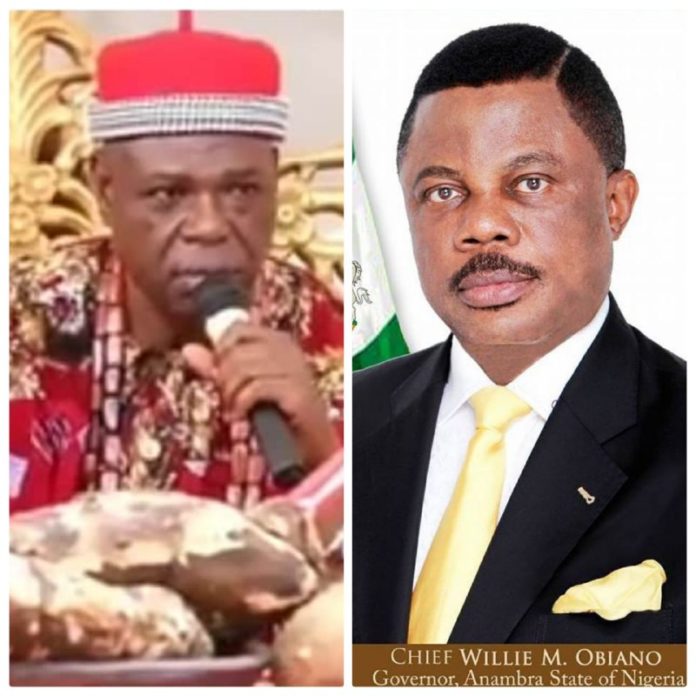 The All Progressives Congress (APC) in Anambra State has berated Anambra State Governor Willie Obiano for suspending the traditional ruler of Ukwulu, Igwe Peter Uyanwa, saying he has not repented from playing the despot, in handling the affairs of the state.

A statement issued on Sunday, by the Publicity Secretary of the Anambra APC, Okelo Madukaife, condemned the position of the state government, maintaining that the singular act of speaking out against bad leadership is not enough reason to dethrone a duly elected traditional ruler.

“Our party in Anambra State is shocked to the marrow that the State Government, under the leadership of Gov. Willie Obiano, has continued to destabilize grassroots leadership in communities of the state with its needless intervention in Kingship matters.

“One would have thought that after the needless, unproductive and trouble-generating interventions in the kingship system of such towns as Oraukwu, Ojoto, Uga, Alor, Amanuke, Awka and Aguleri, the state government would have known better than to wake up one day and pretend to have suspended the traditional ruler of Ukwulu.

“The essence of having a governor is not to kill the kingship system of distinct towns, each with its culture and tradition. Therefore the vainglorious interventions with the affairs of towns, in order to enforce loyalty to a rudderless political persuasion, while killing free speech is misguided and ought to be condemned in naked terms,” the statement said.

According to the party, the infamous positions taken by the Obiano administration is not surprising to the party, considering the fact that the nucleus of the State Government is made up by what it described as ‘diaspora men’, who do not understand the geopolitical make-up of the state and how things work therein.

“The grounds put out for trying to subject the traditional ruler of Ukwulu to a civil servant treatment bellies a major misconception introduced by APGA under the governorship of Peter Obi and sustained by the outgoing government, that traditional rulers and Presidents General of town associations form part of Anambra State Government structure. It is wrong and should be righted now,” the statement said.

The Party noted that part of the alleged sins of the suspended royal father was hosting a meeting to wake Anambra people to the consciousness that the Obiano administration is embezzling the funds of local governments and as a result stalling local government elections.

“What continues to happen is that because of the fact that Local Government Elections have not been conducted, their functions continue to be shared amongst state government, town unions, faceless unions, girlfriends and even some traditional rulers who should have known better. Governor Obiano should back off this misadventure, as the ignoble steps are all too familiar,” it warned.

The Anambra APC reiterated its support for the conduct of LG polls and the enthronement democratically-elected Council leaders, in line with Section 7 of the 1999 Constitution as amended.

“Consequently, we oppose all forces that sustain any alternative to elected LG officials including Governor Obiano and the clique he is abusing in Anambra State House of Assembly, in a game that is very close to the expiry date.

“We assure Anambra people that APC, as the only real opposition party in the State will continue to advocate for the common good for the greater majority in the state, even as we call on the Federal Government and other people of Nigeria to assist Anambra State in its difficult struggle to democratic governance,” the statement concluded.