Work had slowed down at the project for some months now, fueling insinuations that it may have been abandoned.

But the governor has explained that the pace of work was slowed down at the site due to the global coronavirus pandemic.

Speaking today through his Deputy, Dr. Nkem Okeke when he inspected materials for the completion of the project which arrived Anambra through Onne port yesterday.

He appreciated the Commissioner for Housing, Arc. Michael Okonkwo, the contractor and others that ensured the safe delivery of the shipments to the state for their efforts.

“This centre is one of the legacy projects the Governor wants to leave behind which when completed will attract international tourists into the state and in turn improve the state revenue. I want to appreciate the level of work done at the site and encourage the contractor to ensure he delivers the centre soonest,” the governor said. 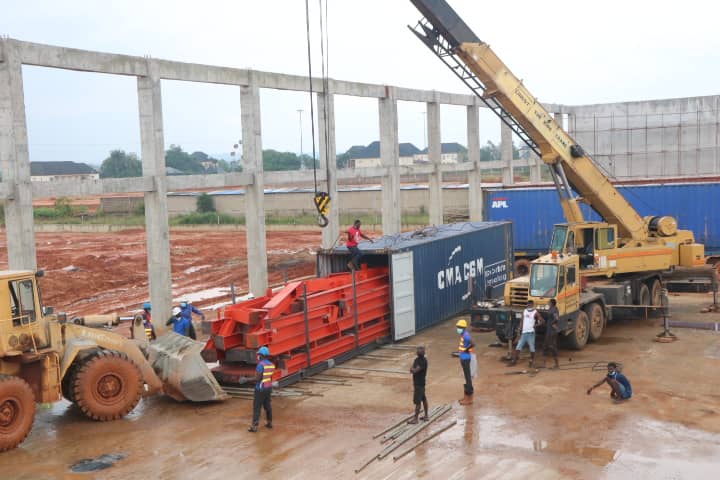 In his remarks, the Commissioner for Housing and Urban Development, Architect Michael Okonkwo noted that the 10,000 capacity centre, when completed, can host four volley/basketball teams comfortably.

“I am excited about the arrival of half of the shipments. We expect that by month-end, the state would take delivery of others. These materials will ensure quick completion of the project before the end of the year, as the state government had earlier promised,” he added.

The Site Manager, Engr. Abiodun Kolawole explained that the project delay was caused by the rainy season and COVID 19.

He noted that out of 56 40ft containers expected to be delivered to the site,15 of them have arrived and that they are excited at the prospect that the project will be completed soon.