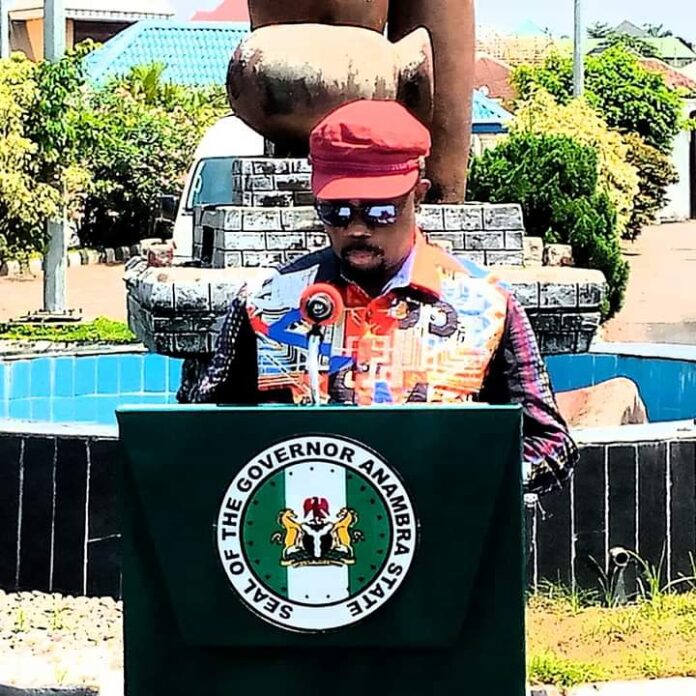 Governor Willie Obiano made the announcement during a statewide broadcast.

Activities in major cities of the state, Awka, Onitsha and Nnewi, were on Thursday morning, grounded as youths turned out on the streets in anger over the killing of innocent protesters in Lagos State earlier during the week.

The youths blocked major points of entry into and exit from the cities, burning tyres on the road and destroying some government facilities especially police stations.

According to the Governor, the curfew has become neccessary due to unpleasant incidents recorded so far, as well as rising tension in the land.

“While our beloved state remains largely safe and isolated from the boiling sea outside, we have also recorded a few unpleasant incidents in our domain and there is justifiable anger in the land. But we cannot give it a chance to consume us all. Consequently, we are taking precautionary steps to prevent further descent to lawlessness in Anambra State by imposing a 24 hour curfew with effect from 8pm today until we bring this rising tension under control,” he said.

Governor Obiano declared that all schools and markets in the state have been closed down, stressing that all large gatherings in any form are banned.

He said that the security agencies are on notice to do the needful, asking them to resist all efforts to provoke them to the use of extreme force.

“All schools and markets in Anambra State are hereby closed. All gatherings by groups and associations under any name or label from 8pm are banned. The law enforcement agencies in the state have been duly directed to enforce compliance. However, all law enforcement officers charged with ensuring compliance to the restriction on movement must resist the temptation of applying excessive force while attempting to bring the situation under control. We cannot afford to repeat the same mistakes that created the problem we are trying to solve in the first place,” Obiano emphasized.

The Governor called on stakeholders including the clergy, traditional rulers, youth leaders, among others, to lend their voices and help address the escalating situation, adding that the sum of two hundred million naira has been approved to compensate families of those affected by SARS brutality in the state.

And more importantly, I am happy to announce that we have set aside the sum of N200m to be disbursed as compensations to people who have proven cases of rights violations, torture and deaths from the activities of the defunct SARS in Anambra State. This provision is part of the 2021 Budget which shall be presented to the State House of Assembly in a matter of days. This effort is made essentially in pursuit of a better society. We know that no amount of money can equate a human life. But we believe that a symbolic gesture delivered at the right moment can heal old wounds and help aggrieved families to find closure in these most traumatic times.”