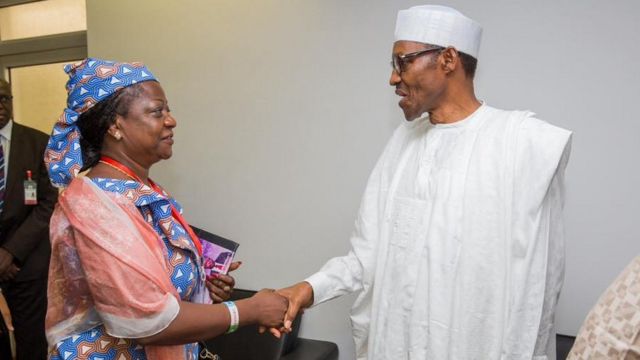 In a development that is currently causing public outbursts, President Muhammadu Buhari has appointed his Special Assistant on Social Media, Lauretta Onichie, as an electoral commissioner of the Independent National Electoral Commission representing Delta State.

This was contained in a letter he sent to the Senate, seeking confirmation of their appointment.

President of the Senate, Ahmad Lawan, read the letter on the floor of the Senate on Tuesday. Buhari said the appointment is pursuant to paragraph 14 of part 1f of the first schedule of the 1999 constitution.

In a separate letter, the president sought the Senate’s confirmation of the appointment of three nominees as Executive Directors of the Board of Federal Roads Maintenance Agency (FERMA). They are Ifeanyi Christian – South East, Muhammad Gambo – North East, and Abubakar Ismaeel – North West.

The appointment of Lauretta is currently eliciting negative remarks from Nigerians, with some describing the President’s move as unconstitutional.

Reacting to the development, Human Rights Activist, Festus Ogun tweeted:  “The appointment of Lauretta Onochie as INEC Commissioner is unconstitutional, undemocratic and ridiculous. Section 14 of Part 1 of Third Schedule of the 1999 Constitution provides that a person to be appointed as INEC commissioner must be a person of “unquestionable integrity”.

“The integrity of Onochie, an aide of Pres. Buhari, is questionable for her clear partisanship and being a card carrying member of the APC. INEC commissioners should be independent and not partisan. This shameful recommendation must be rejected by the Senate.

“This assault on our tottering constitutional democracy must be resisted by all patriots. Nigerians should not forget that this administration is not serious about electoral reforms.  The recommendation of Onochie is hereby rejected”.