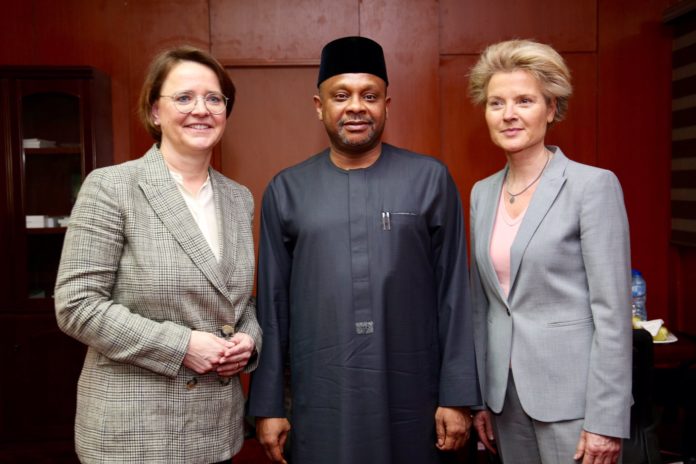 The Federal Commissioner of National Commission For Refugees, Migrants and Internally Displaced Persons (NCFRMI), Senator Basheer Garba Mohammed, has attributed the success of the agency to President Muhammadu Buhari’s determination to frontally deal with issues relating to migration.

Senator Mohammed stated this when he received a German delegation on Migration in his office, at the Federal Secretariat, Abuja.

The delegation was led by the German Minister of State and Federal Commissioner for Migration, Refugees and Integration, Annette Widmann-Mauz, alongside the German Ambassador to Nigeria, Birgitt Ory.

Noting that Nigeria has been a significant country in the global Migration discourse, he remarked: “Global Compact for Safe, Orderly and Regular Migration, GCM is the goal of the Nigerian government.

“The large movement of refugees and migrants precipitated by the Syria crisis and similar migration waves in other regions of the world reached its alarming level in 2015 and increased the worries associated with global migration management.

“Seeking a sustainable response with a sustainable impact to the reality, the international community negotiated and adopted the Global Compact for Safe, Orderly and Regular Migration, GCM.”

He reiterated that Nigeria would not relent in monitoring and regularly assessing the implementation of its migration policies, saying that “As a country, we understand that policies alone will not respond to why people move or don’t move without involving all other aspects of development and social life.”

Stressing that the NCFRMI has the mandate to safeguard the interest and treatment of refugees, cover resettlement of IDPs and coordinate issues of migration, Senator Mohammed disclosed that the agency was developing messages to address and directs citizens to the different opportunities they can take advantage of in Nigeria.

“With the visit of your delegation, we will continue to advocate for joint bilateral agreements with the government of Germany for the promotion of more regular migration.

“We understand that aspiring migrants will need to be equipped with the necessary skills, learn and understand the processes of regular migration.

“And all these will hopefully reduce the risks being taken by Nigerian men, women, and children currently crossing the Sahara Desert and the Mediterranean Sea,” he further stated.

Earlier, the leader of the German delegation, Widmann-Mauz said: “We hope to cooperate and work together in order to find new ways of strengthening regular migration.”