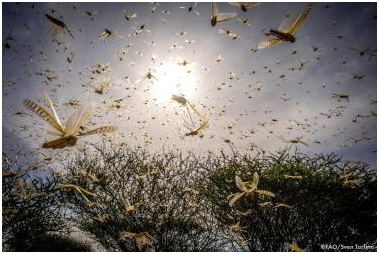 Mercy Corps, a global group working to achieve a real and lasting impact in the world’s toughest humanitarian emergencies says many communities in East Africa are still struggling to protect against the impact of COVID-19 pandemic.

The group which has been responding to almost every global natural disaster in the last 20 years, including the Nepal earthquake, the hunger crisis in the Horn of Africa, the Indian Ocean tsunami and Hurricane Dorian in the Bahamas, points out strains on the food supply chain, the idea of an additional threat to this region already challenged with food shortages seems unimaginable.

This is as people in Kenya, Somalia, South Sudan and Ethiopia, months ago, celebrated when the rains finally came last fall, promising to relieve the drought that had gripped the region for two years. Although the heavy rains caused flooding, farmers in the region could at least look forward to rich crop yield.

The torrential rains, however, brought another crisis, a serious and widespread desert locust outbreak.

Desert locusts are the most destructive migratory pests in the world. Thriving in moist conditions in semi-arid-to-arid environments, millions of locusts have been feeding throughout East Africa, devouring everything in their path, posing an unprecedented threat to the food supply and livelihoods of millions of people.

Farmers stand by as armies of ravenous insects eat their young, healthy crops; meanwhile, herders watch the rangelands stripped bare before their eyes, and before their livestock can get to them.

Mercy Corps’ Regional Director for Africa, Sean Granville-Ross, says “after the eggs hatch in May, we anticipate new swarms will form in June and July, which will coincide with the start of the harvest season. This could not be worse timing.”

Ethiopia and Somalia had not seen such severe desert locust outbreaks in more than 25 years, Uganda in 60 years, and Kenya in 70 years (FAO). The lack of infrastructure to address the locust invasion is deepened by COVID-19 restrictions, which can slow the air and ground spraying of pesticides and disrupt the supply chains of the necessary products needed to prevent these pests from wiping out crops across the region.

A locust infestation of this size and magnitude over one or more years is referred to as a “plague.” In the middle of 2019, desert locusts began to descend on countries in the Horn of Africa and East Africa.

The extreme weather causing the intense rainstorms in the area are believed to be caused by record high temperatures in the Indian Ocean. Locust swarms are not uncommon in the region, but it is unusual to have infestations of this magnitude and over such a broad area.

This outbreak began with two cyclones and heavy rains in 2018 in the Southern Arabian Peninsula, an area wracked with food insecurity and conflict that eclipsed this growing danger and enabled three generations of locusts to flourish undetected. While they moved, they settled and laid eggs along their path. These eggs are now hatching and forming a new generation of locusts, which continue to spread upon maturity.

Living anywhere from three to five months, the desert locusts thrive if they hatch in warm, moist sand in semi-arid-to-arid regions with green vegetation, which is what they find in East Africa and the Horn of Africa. (MCTPs)

The World Meteorological Organisation and FAO report that the life cycles of a locust–” the laying of eggs, egg development, hopper development, moulting, hardening of hopper wings, maturing of locusts, speed of movement of hopper bands and adult swarms, and transition from the younger, “solitary” phase to the gregarious (joining swarms) phase”–require ideal weather conditions including tailwinds that facilitate their travel. The conditions this season have been unusually beneficial for breeding.

Locusts breed after storms, laying as many as 1000 eggs in a square meter of sand. After hatching, the wingless nymphs travel in “hopper bands”, literally long thick ribbons of insects that hop across the desert.

They are hungriest in their “teen” years, and eat their weight in food every day, consuming almost any vegetation, including crops, pastures and forests. Eventually, they grow into adults with wings and become “gregarious”, travelling in large swarms that can grow to the size of Paris or New York.

One square kilometre swarm can contain about 40 million locusts, which eat about the same amount of food in one day as 35,000 people. An average swarm can destroy crops sufficient to feed 2,500 people for a year.

Sometimes as many as 80 million locusts crowd into each square kilometre of the swarm, and they can travel more than 90 miles in a day (BBC). FAO reports the insects destroyed more than 175,000 acres of farmland in Somalia and Ethiopia by the end of December. The sheer size of the swarms in Kenya and Ethiopia give rise to great concern over even larger swarms during harvest season.

Connecting with local and country-level governments, locust-centred task forces and other partners, Mercy Corps teams are increasingly working to mirror the response to the locusts to COVID-19, responding to urgent needs such as food and cash, and looking to build preparedness and resilience against future invasions with information outreach and surveillance systems, and strengthening markets and livelihoods.

A great example of such partnerships already in motion includes an effort led by a Mercy Corps Agrifin Programme working with local partners to develop digitally-enabled solutions for smallholder farmers in five African countries.

In Kenya, Mercy Corps coordinated with a host of partners to develop an SMS line and a WhatsApp line for farmers in need of timely information.

Using a new line, farmers can easily report desert locusts in their areas and access up-to-date information. This line was advertised earlier this month via a new TV series that offers desert locust mapping and advisory content and reaches six million farmer households.

The WhatsApp line also links to COVID-19 content hosted by the World Health Organisation. The cooperation and coordination of several partners build upon an extensive mobile-technology service platform that is being replicated in Ethiopia and has the potential to expand to additional countries.

These information systems put in place a foundation for a stronger response to future locust invasions. Now, Mercy Corps efforts will be focused on meeting urgent needs for food and working in partnership with governments and other organisations, including the U.N., to provide support and assistance to these communities so they can build back.

“At a time when the UN is estimating that the number of people suffering from hunger could go from 135 million to more than 250 million in the next few months, many of these are likely to be in East Africa”, says the group’s regional director Granville-Ross. “The task at hand is ensuring food security for these communities, and after this infestation, help prepare them for the next agricultural season.