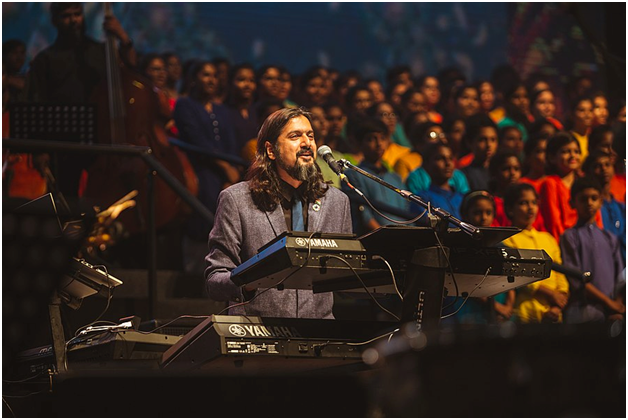 According to Wikipedia, he has performed at venues in over 30 countries including at the United Nations headquarters in New York and Geneva. Ricky Kej was named a UNCCD Land Ambassador at the COP14 to raise public awareness about the challenges of land degradation, desertification and drought. Ricky also serves as a UNESCO – MGIEP “Global Ambassador for Kindness”, UNICEF Celebrity Supporter,[4] and is an Ambassador for the Earth Day Network. In 2020, Ricky was named as a GQ Hero 2020 by GQ magazine.

In 2015, he won a Grammy at the 57th Annual Grammy Awards for his album Winds of Samsara in the Best New Age Album category. The project, his 14th studio album, made a debut at No. 1 on the US Billboard New Age Albums Chart in August 2014, a first for a person of Indian origin. The album also peaked at No. 1 on the Zone Music Reporter Top 100 Radio Airplay Chart in the month of July 2014. Ricky also performed keyboard on the 2016 Grammy Winning album “Grace”, Produced and composed a song on the 2016 Grammy Nominated Album “Love Language” and arranged and performed keyboards on the 2015 Grammy Nominated album Ayahuasca Dreams.

His album Shanti Samsara – World Music for Environmental Consciousness was launched on 30 November 2015 at the 2015 United Nations Climate Change Conference by Indian Prime Minister Narendra Modi and then French President, Francois Hollande. In the months since its launch, Ricky has traveled widely speaking about conservation and the environment, including a visit to the Republic of Kiribati, where he interviewed and created music with three-term ex-president, Anote Tong.

Ricky is credited with over 3,500 placements for Radio and Television Jingles. He composed the music for the 2011 Cricket World Cup opening ceremony, held at Dhakka on February 17, 2011. On April 26, 2016, Ricky travelled to Jaipur, India where he was named as goodwill ambassador for Save the Children‘s new global campaign, Every Last Child. On July 18, 2016, Ricky was awarded the Excellence and Leadership award as a global humanitarian artist at the UN headquarters, New York and performed excerpts from Shanti Samsara live in the United Nations General Assembly Hall. Ricky concluded his performance at the United Nations General Assembly by saying, “To end, I want to state the obvious … Climate change is real … Climate change is human induced. Climate change is affecting us all … and our actions affect countries on the other side of the world.”

In 2018, Ricky was named in the prestigious “Real Leaders 100 List”. Real Leaders (A Signatory to the UN) curates this list of leaders who ‘Inspire the Future’. Ricky was the only representative from India. In May 2018, Ricky was honoured by The House of Commons, Canada for “Outstanding Musical and Humanitarian Achievement”. In his endeavour to familiarise children with the Sustainable Development Goals, Ricky created ‘My Earth Songs’ – 27 children’s rhymes based on the 17 SDG’s. These songs launched by UNICEF are published in over 5 million textbooks (English, Hindi & Kannada languages).

In 2020, Ricky was featured in GQ Heroes for using his talent to better our planet through his music, advocacy, lifestyle and action. Ricky’s life and journey as a musician is now taught to 7th Grade children in India as part of the ICSE syllabus English textbooks. Ricky Kej is notably also a professor at the prestigious National Institute of Advanced Studies (at the Indian Institute of Science).

This musical icon was born in North Carolina. A half Punjabi and Marwari by birth, Ricky moved to Bangalore, India when he was eight years old and has lived there since. He completed his schooling at the Bishop Cotton Boys’ School, Bangalore and subsequently, his Dentistry from the Oxford Dental College in Bangalore. He did not pursue a career in the field and opted for a career in music instead.[25]

While attending university he joined a progressive rock band which he says gave him a good foundation and exposure to music[24] In an early interview, Kej’s mother, Pammi Kej, has opined that Ricky’s artistic genes were inherited from his grandfather Janaki Das, an actor, Olympic cyclist, and freedom fighter. He does not look upon his degree in dentistry as an alternate career option, and notes that there are ups and downs in every occupation and there is no real need for a backup career.[25] Ricky has revealed that his decision to follow a career in music was not an easy one for his parents to accept.[10]

Ricky started off his career as the keyboardist of Bengaluru-based progressive rock band Angel Dust. Two years into the band, Ricky moved on to become a full-time composer and set up his own studio, Raveolution, in 2003. He eventually went on to create music for over 3,000 ad jingles and Kannada films. Though Ricky’s work is an amalgamation of multiple genres, he has maintained that the essence of his work retains the aesthetic of his Indian roots, largely based on Hindustani Classical and a bit of Carnatic also. He has cited Pakistani qawwal Nusrat Fateh Ali Khan and British vocalist Peter Gabriel as an inspiration to constantly challenge and push his own musical boundaries. Ricky is a self-taught musician but has studied classical music at around the age of 24, to overcome what he observed as a handicap at the time.[

Ricky has released 17 studio albums, most of which were physically released in the US but not in his home country of India. Ricky has noted that this was on account of the poor music-buying culture in India and the dominant presence of the Hindi film music industry in the country.[27] Ricky’s 13th Studio Album, Shanti Orchestra was released on 9 July 2013. The album peaked at No. 3 in November 2013 on the ZMR Top 100 Radio Airplay Chart, and was ranked No. 37 on the ZMR Top 100 Airplay Chart for 2013 The album was nominated for a 2013 ZMR Music Award  and the track “Forever” from the album was also nominated for a Hollywood Music in Media (HMMA) Award in the same year.

On November 30, 2015, his album Shanti Samsara – World Music for Environmental Consciousness was launched at COP 21, the 2015 United Nations Climate Change Conference by Indian Prime Minister  Modi. The Prime Minister personally presented French President François Hollande with a copy of the CD. A video featuring music from the album was also played for UN Secretary-General Ban Ki-moon and the gathering of world leaders. The album was one of several projects discussed during a meeting Prime Minister Modi had with Ricky following his Grammy win.

On December 23, 2015, Ricky Kej was invited to perform a song from Shanti Samsara in a special arrangement featuring flutist, Wouter Kellerman and over a hundred students from the Bishop Cotton Boys’ School in a special performance for India’s President Pranab Mukherjee. Also in attendance were many state and national officials and an audience of nearly 13,000 people. In 2016 “Samsara” from Shanti Samsara received the December 2015 Global Music Awards Gold Medal for World Music – India, and the International Acoustic Music Awards for Best Open/Acoustic Open Genre[4 and on March 1, 2016, was named as a finalist in the 2015 in the World Music category of the John Lennon Songwriting Contest.

Ricky has expressed an interest in working with Pharrell Williams and Hans Zimmer in the future. He has noted Pharrell as being a very versatile artist which would make it very interesting to work with him, and also being able to infuse Indian elements into Hans Zimmer’s movie compositions. He has also acknowledged a lack of interest in working with Indian film music scoring in the future, though he is open to the use of his existing music catalog in Bollywood movies, and also composing for a Bollywood movie only if the script moves him emotionally. He has also expressed a strong interest in working with Kannada filmmaker Girish Kasaravalli if the opportunity arises. Ricky also cites the dominance of Bollywood and Film music for the lack of Grammy winners in the country.

However, this week marks the fifth anniversary of the Paris Agreement launched at UNFCCC COP21. The historic legally binding treaty between 189 countries was a significant milestone towards achieving a sustainable low-carbon future and negating the effects of human-induced climate change. My relationship with the COP21 summit is very special and was a turning point in how I use my music to inspire behavioural change and positive social impact.

In September 2015, The Indian premier, Modi invited me to his office in New Delhi to congratulate me for the Grammy I received for my album Winds of Samsara. I was thrilled by this invitation, and what I assumed would be just a courtesy call turned into an hour-long philosophical exchange that resulted in my epic album for world environment consciousness Shanti Samsara and changed the course of my life.

I have always been passionate about our environment and this was one of the key topics the Prime Minister touched upon – specifically, the need to preserve and protect our environment. He wanted to share this view with the world and told me that he would do just that by delivering a speech at the United Nations COP21 Climate Change Conference in Paris in 2015 where he would also launch the International Solar Alliance – an initiative by 120 nations to promote affordable solar energy worldwide.

I was very inspired by our conversation and realised that we were on the same page philosophically. Prime Minister Modi also encouraged me to make an uplifting album that could inspire environmental consciousness. He also suggested that the album should emphasize inclusivity and incorporate different cultures and experiences.

I went on to create Shanti Samsara – World Music for Environmental Consciousness that featured over 500 musicians from 40 countries including Peter Yarrow, Stewart Copeland (The Police), Ladysmith Black Mambazo, Philip Lawrence, Bruno Mars and The Royal Philharmonic Orchestra. It has gone on to win multiple awards globally. Prime Minister Modi launched my album at the UN Climate COP21 in Paris. presenting it as a gift to then-president of France Francois Hollande on the main stage.

One of the world leaders who caught my attention at the historic conference was the three-term president of the Pacific island nation of Kiribati, Anote Tong. During his speech, he urged the other leaders to support a proposition that could guarantee the future where the nation of Kiribati would remain above water. This powerful speech affected me deeply and I began a journey to understand the severe effects of global warming by visiting Kiribati and interviewing the president. I spent a week in Kiribati absorbing their culture and taking in the sheer beauty of this magnificent group of islands that have played no role in contributing to large scale greenhouse emissions and is are facing the brunt of rising sea levels due to climate change.

As our leaders gather to affirm their roles in combating climate change on the fifth anniversary of the COP21, I am reminded of what Anote Tong said during his interview with me – that Kiribati is already at the front lines of the climate battle, and when the front line falls, someone else will take their place and it won’t stop until it affects us all. There is no time to lose.

I hope that each of us will take these words to heart and support positive actions – on the political arena and in our daily lives – to create ripple effect and change the world for the better.