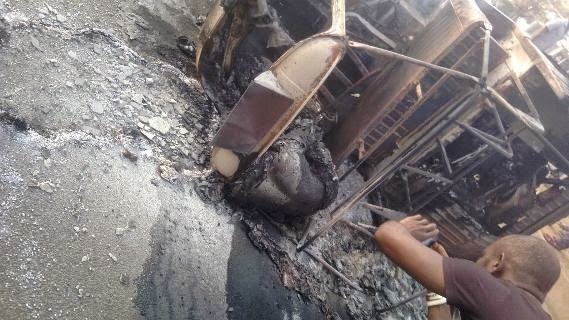 An unidentified commercial tricycle operator was on Monday, burned to death by an angry mob in Ughelli, headquarters of Ughelli North local government area of Delta State, after a failed attempt to kidnap 3 children.

TNC gathered that the keke operator tried fleeing the scene, when angry mob caught up with him, and rescued the children at the Iwhrenene axis of Ughelli, after which they beat him and then burned him to death.

An eyewitness who spoke on condition of anonymity said the Keke rider had conveyed the children from Emekpa axis of Ughelli to Afiesere community but somehow carried the children to Ughelli.

“Upon sensing danger, the eldest of the children immediately jumped out of the moving Keke and screamed for help, while the suspect tried fleeing with the other two children.

When contacted, the Delta State Police Public Relations Officer, DSP Onome Onovwakpoyeya confirmed the incident, but said the matter was not reported at any Police formation on time.

He also urged Parents and guardians to look after their children and wards very well, adding that evil people are roaming the street and as such, children need to be carefully watched and protected at all cost.