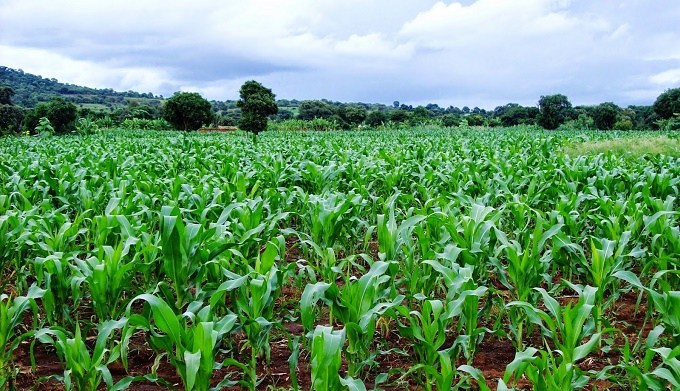 Maize farmers in Nigeria are gearing to produce 25 million metric tons of the cereal this planting season.

But this production target is eight million tons less what the country produced in 2017. Nigeria is the largest African producer of the cereal with over 33 million tons, followed by South Africa, Egypt, and Ethiopia.

However, the decision of the maize farmers to raise their production level this year follows the resolve of the Federal Government to ban maize importation in the country.

Their trade group, Maize Association of Nigeria (MAAN) is hailing the government decision as a great step towards self-sufficiency in food production.

Botanically, maize is known as Zea mays L. (corn). It is the most abundantly produced cereal in the world. It is grown in every continent except Antarctica.

The International Institute of Tropical Agriculture (IITA) says about 50 species exist and consist of different colours, textures, and grain shapes and sizes. White, yellow, and red are the most common cultivated maize types.

The white and yellow varieties are preferred by most people depending on the region. Maize, which was domesticated in central Mexico around 1500 BC, was introduced into Africa around 1500 AD, and spread to every corner of the continent within a relatively short period and is now Africa’s most important cereal crop.

‘’Maize is the most important cereal crop in sub-Saharan Africa and an important staple food for more than 1.2 billion people in Africa and Latin America.

‘’More than 300 million Africans depend on maize as the main staple food crop. All parts of the crop can be used for food and non-food products.

‘’Maize accounts for 30−50% of low-income household expenditures in Africa. Over 30% of the caloric intake of people in Sub‐Saharan Africa comes from maize.

‘’For these reasons, several African countries that depend on maize as a staple food crop, have adopted agricultural policies to maintain a steady supply of the commodity through increased production and productivity of the crop. Maize is also consumed as a vegetable and it is rich in dietary fibre and other nutrients’’, IITA says.

Maize production in Africa was around 75 million tons in 2018, representing 7.5% of world maize production. Maize occupies approximately 24% of farmland in Africa and the average yield stagnates at around two tons/hectare/year.

Africa imports 28% of its required maize grain from countries outside the continent as most of the maize production in Africa is done under rain-fed conditions. Irregular rainfall can trigger shortages and famines during occasional droughts.

According to the Food and Agriculture Organisation (FAO, 2017), the total maize harvest in Africa was estimated at 40 million hectares, with Nigeria being the top producer (16%) followed by Tanzania.

Worldwide maize consumption is estimated to be more than 116 million tons with 30% and 21% of the consumption occurring globally and in Sub-Saharan Africa, respectively. Around 14 countries in Africa consume 85–95% of white maize as their staple food.

White maize fetches premium prices in Southern Africa where it represents the main staple food, whereas yellow maize is preferred as animal feed in most parts of South America and the Caribbean.

Maize is processed and prepared in various forms depending on the country. Ground maize is prepared into porridge in Eastern, Southern, and West Africa. In all parts of Africa, green (fresh) maize is boiled or roasted on its cob to fill the gap when the supply of grain is low.

Various species of stem borers rank as the most devastating maize pests in SSA. They can cause 20–40% losses in the field and 30–90% losses in postharvest and during storage. Other pests in SSA include the ear borer, fall armyworm, cutworm, grain moth, beetle, weevils, grain borer, rootworm, and white grub.

IITA scientists have developed high yielding, disease and pest-resistant and nutritionally enhanced maize varieties that are adapted to the growing conditions in Africa.

IITA’s improved varieties, along with other production technologies, helped to stem the serious problem imposed on maize production due to the outbreak of maize streak virus (MSV) in the 1970s, which was considered a tremendous achievement that reversed a chronic food shortage.

Remarkable success was also achieved with the development of Striga and pest-resistant varieties of maize in Nigeria and Cameroon.

The released varieties were able to reduce the emergence of Striga and resulted in good yield in areas most affected by the weed in both countries. In addition to the normal white maize, IITA scientists were also engaged in the development of nutritious varieties of maize.

Many provitamins A rich OPVs and hybrids were released in WCA and beyond. The provitamin A enhanced varieties are well adapted and are as good as other normal white varieties in their yield potential, resistance to disease, and other economically important traits.

These varieties are commended to combat malnutrition and diseases caused by micronutrient deficiency in a sustainable way.

Extra early, early, intermediate, and late-maturing varieties were developed and released with significantly higher yield compared to the local farmers’ varieties. Early maturing varieties enabled maize production to expand into new areas, especially to the Sudan savannas where the short rainy season had adversely affected maize cultivation in the past.

The intermediate and late-maturing varieties developed by IITA scientists are also popular among farmers and maize producers in the maize belt areas of WCA countries.

IITA’s post-harvest researchers developed effective and simple machines and tools that reduce processing time and labour as well as production losses. They have also developed a natural biocontrol agent to make maize free of poisonous aflatoxins and made maize safe for consumption.

In West and Central Africa, IITA has contributed significantly to the capacity building of the national maize research programmes, universities, private seed companies, and NGOs through long- and short-term training, the supply of improved maize varieties, parental lines and hybrids, engagement of partners in designing and implementation of a diversity of projects, sharing of diverse elite germplasm, and supporting promotion and demonstration of technologies to farmers and consumers.

However, the Central Bank of Nigeria (CBN) in a circular on Tuesday restricted the issuance of Foreign Exchange (Forex) for maize importation.

MAAN President, Dr. Abubakar Bello, who hails the development in Abuja, says the action of the government will spur them to produce more maize in the country, pointing out that the apex bank through its Anchor Borrowers’ Programme has released N16 billion for farmers.

“From the provision of all needed inputs to land preparations to harvesting, aggregation, and storage. This 2020 wet season programme, maize production of over 250,000 hectares of land have been cultivated by MAAN members only, with this and other partners, maize production will be doubled.

“To achieve this, CBN has supported by providing high yielding maize seeds to all our members. With all these great steps being taken by the government, the country can be self-sufficient in maize production in the next few months if we all believe in the capacity of our farmers and put our hands on the plough.

“We have done it before and we can achieve it again as it was done in 2005”, Bello says, adding that the association was already engaging reputable commercial end-users of maize to enter into Memorandum of Understanding as off-takers.