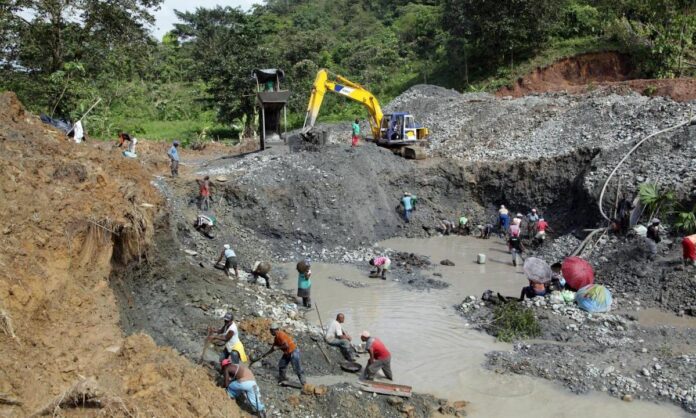 There is need to check the activities of illegal oil miners in Ogbaru Council Area of Anambra State, especially in Ogwu-Aniocha and Ogwu-Ikpele communities.

The Transition Committee Chairman of Ogbaru, Arinzechukwu Awogu, gave the view during an interactive meeting with leaders from Ogbaru Communities at Ogbaru Council secretariat, organized by the Anambra State Oil and Gas Development Committee.

Illegal oil mining has been a major challenge in Ogbaru, despite the lack of access to the Oil-rich communities, although it was gathered that oil tapped was evacuated through the Rivers, Imo and Delta routes which also connect the council area.

In recent times, there have been issues with election of leaders in the communities with reports of serious violence and TNC learnt that they may not be unconnected with the tussle over who controls the illegal oil mining cartel within the communities.

According to Awogu, the Council Chairman, the meeting was aimed at sharing thoughts on the oil and gas activities going on in their land, how it affect the communities, the degradation such exploration was bringing to the environment, the likely mitigating strategies and the benefits that should be enjoyed by the people and government.

“For the records, a Chinese oil and gas company, the China Petroleum & Chemical Company referred to as SINOPEC, in 2010, crossed the River Niger into Ogwu-Aniocha from Okpai in Ndokwa East local government area of Delta state for oil exploration. When the agitated inhabitants of the area confronted them, they claimed that they were there to explore for oil on the permission of the Federal Government.

“SINOPEC succeeded in discovering and marking out a total of 93 oil wells. These wells were originally capped by Shell in the 60s. Of the 93 oil wells, twenty-five (25) were within Umunzalabia Kindred’s land and twenty-seven (27) were located within Umuezeosai Kindred’s land, while the rest forty-one (41) were located at the Ofia-Ogwu (Okporodum, Utu-ala, Ogbu-ndam, Odidi lake etc). The oil company, SINOPEC, later left the area in April of 2011.

“Then, in 2013, an oil company known as Sterling Oil Exploration and Energy Production Company Limited (SEEPCO), acting on the discoveries of SINOPEC, moved into Ogwu-Aniocha through Oguta in Imo state, clearing a large expanse of land and laying pipes from Ogwu-Aniocha to Oguta in Imo state preparatory to the commencement of production. They brought in and set up 350 caravans, constructed helipad to land their helicopters, assembled earthmoving and other heavy equipment moved in their rig with their workers mostly foreign nationals scattered all over the place. All these I saw in my visit to the oil location in 2016.

“Currently in Ogwu-Ikpele, the movement of their rig from one location to another by SEEPCO is like taking a leisure walk. Yet, neither the compulsory Environmental Impact Assessment (EIA) as required by law has been conducted nor any form of Memorandum of Understanding which will accommodate instruments of Cooperate Social Responsibility (CSR) signed,” he revealed.

Expressing appreciation to the Governor of Anambra state, Chief Willie Obiano, for setting up the Anambra state Oil and Gas Development Committee and for assembling very committed and selfless individuals as committee members, Awogu said the support given by the governor and other well-meaning individuals had ensured that the state was on the verge of becoming an oil-producing state.

The Chairman further alleged that SEEPCO has done no community engagement, has no signboard anywhere in Anambra state, has no employment quota for the people but has continued to devastate their lands and aquatic lives, as well as caused casualties on their lands and waterways in the name of oil exploration and production.

“The oil industry is a highly regulated sector with ethical practices, none of which SEEPCO has adhered to, hence this interactive meeting. Our ultimate desire is to have SEEPCO formalize its operations in Anambra state by conducting its activities as required under the Extractive Industries Regulations such that will bring about Anambra state becoming an oil producing state.

“Ogbaru local government council is fully in support of whatever step the Anambra state government chooses to take in further compelling SEEPCO to follow the ethical practices guiding the oil industry in the knowledge that Ogbaru local government, Ogwu-Aniocha, Ogwu-Ikpele and other impacted communities will benefit from the oil derivations accruing to Anambra state as oil producing state in addition to membership to Niger Delta Development Commission (NDDC) and its benefits.

“Let us say no to the Balkanisation of our land and people by the oil company operating in our area. Let us refuse to be used against our own people and the greater interest of the state.

“With the commencement of the right and proper steps today, our communities will begin to have glimpse of development in no distant time and our begging needs of access roads, pipe-borne water, scholarships, building of schools, hospitals, modern markets, civilian jetties, among others, will be made available to the enjoyment of our neglected population,” Awogu maintained.