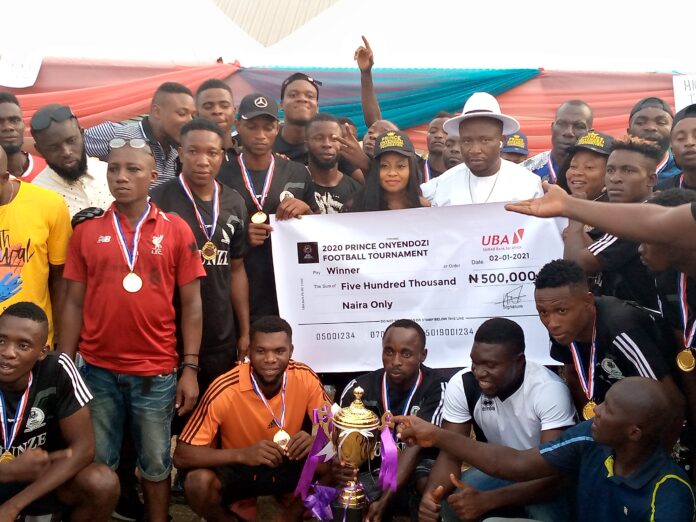 Awka – It was a ceremony that reflected the people’s general acceptance and approval as a non-governmental organization, Prince Onyendozi Foundation was inaugurated in Anambra State.

The foundation is an initiative of a son of Orumba South, Prince Engr Nnanyerugo Ike, aimed at touching lives across various areas.

The inauguration ceremony which held at Ezira Central School Field, was also used to mark the grand finale of the 2020 Prince Onyendozi Football Tournament which had the 15 communities of Orumba South Local Government Area, as participants.

At the end of the tournament, Umunze community clinched the prize money of #500,000 after beating Enugwu Umuonyia community 3 nil, leaving them with the second place prize of #300,000.

Ogboji came third in the tournament, winning the prize money of #200,000 while all the participating teams got consolation prizes of #40,000 each.

Inaugurating the Foundation, the Member representing Orumba South in Anambra State House of Assembly, Hon Emma Nwafor, said such foundations need to be encouraged to complement government efforts at bettering the lots of the people.

He commended the vision of Prince Ike, especially through the football tournament and other humanitarian efforts, urging others of his ilk to emulate him.

“What we are seeing today, is the kind of thing we want our people to do. This is a youngman who is using his god-given wealth to touch lives. He is not occupying any government position but he has done so much to touch lives. I am pleased to inaugurate this foundation and hope that others will emulate him,” he said.

The Chairman on the occasion, Chief Obiorah Okoli who was represented at the event, expressed delight to be identified with the foundation which he observed has done a lot already to salvage the condition of Orumba South people.

According to him, the tournament will provide the opportunity for budding football talents in the council area to develop.

In his remarks, the Founder and Chief Executive Officer of the Foundation, Prince Ike explained that he established the foundation to touch lives and propel the development of the council area.

He noted that the LGA has produced notable sons and daughters who have made their marks across various spheres of human endeavour but regretted that poverty is still at a high level among the people.

“Prince Onyendozi Foundation is a registered non-governmental organization established with the sole aim of touching lives and providing the platform to galvanize and mobilize efforts at bettering the lot of the people especially the less privileged, widows, orphans and the physically challenged. It is on record that since its inception, the foundation has touched not less than a 1000 lives through many of its interventions in the areas of education, health, sports development, youths empowerment and skills acquisition, among others. During the COVID-19 pandemic, the Foundation launched an initiative under which it provided relief materials to many households in Orumba South Council Area. We also undertook our 2020 Medical Outreach for the 15 communities of Orumba South, which we flagged off on the 7th of November. This outreach which we run in partnership with medical doctors, pharmacists, laboratory scientists and nurses, is aimed at addressing the numerous health challenges of our people,” he revealed.

Prince Ike also noted that the Foundation has enrolled 40 persons from Orumba South LGA, under the Anambra State Health Insurance Scheme (ASHIA), to enjoy free medicare for a period of twelve months.

He also spoke on the women empowerment programs of the Foundation, through which over 200 indigent women and widows have been impacted positively, assuring that the new year will mark more interventions by the foundation in various areas.

They described the sponsor of the tournament as a generous person who is concerned about the development of youths in the council area.

Highpoint of the event was the handover of the prizes to the winners as well as distribution of bags of rice to over 150 indigent women from the 15 communities of Orumba South LGA.