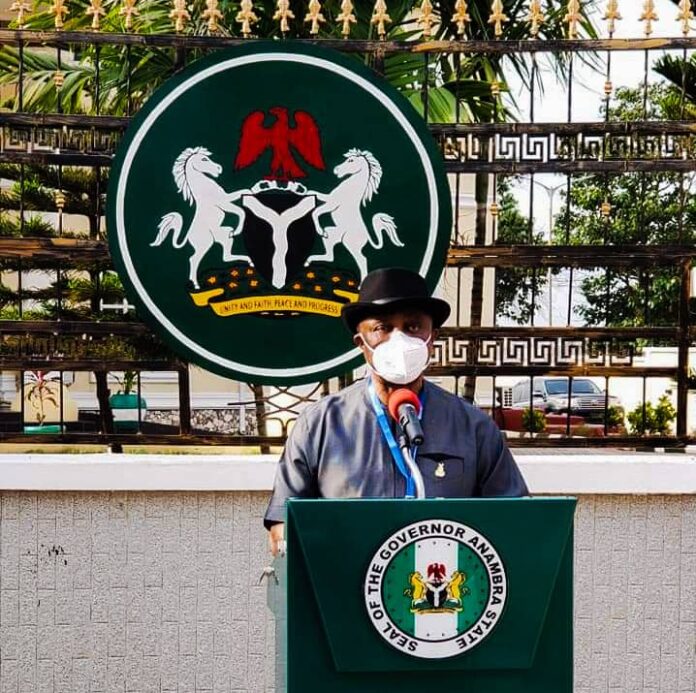 Awka – In response to the second wave of the coronavirus in Nigeria which has resulted in a considerable spike in infections in Anambra State in the last two weeks, Governor Willie Obiano has appealed to people of the state to shield themselves from the pandemic.

80 cases of COVID-19 have been confirmed in the state since the second wave began over two weeks ago, meaning an average of 40 cases per week.

In contrast, the state used to record nine cases per week on average in the first wave.

The increase has been attributed to the Christmas and New Year festivities and influx of millions of people into Anambra State from different parts of the country and beyond during the period.

Governor Obiano in an address on Thursday in Onitsha, noted that reports from across Anambra State show a huge increase in the incidence which if not arrested now, will produce a catastrophic result in the near future.

“Despite the deaths of some high- profile Nigerians in the second wave of the pandemic like a former vice chancellor of Alex Ekwueme University in Ebonyi State, Professor Oye Ibidapo-Obe, who was also a former vice chancellor of the University of Lagos, noted Governor Obiano, it is disheartening that there are people in Anambra State who still doubt that Covid-19 is ravaging the country.

“It is embarrassment at some patients who flout the Covid-19 protocols in the most unconscionable and callous manner.

“There are two persons who a few days ago came for testing and were confirmed to be positive. Instead of isolating themselves, they rejoined a wedding party and may have infected a number of people,” he regretted.

The State governor, further advised health professionals in the state to treat every case of malaria as COVID-19 until proved otherwise.

This latest advisory, he noted, is because some people treated for malaria later turned out to be COVID-19 patients and in some cases, they are discovered too late.

While urging the people to go for tests and possible treatment which are still free in Anambra, unlike in some states where some private hospitals charge between five and ten million naira per patient for treatment only, Obiano commended the state’s COVID-19 Case Management Team for exceptional professionalism and competence.

“The team has not lost even one patient since the second wave. In fact, it did not lose a patient brought early enough for treatment. The 19 fatalities recorded in the state during the first wave were brought to our attention either when the persons were already gone or were too late for successful management,” Obiano noted.

The governor expressed worry over the trend because of the health and economic implications as according to him, COVID-19 is not just a health matter but, more importantly, a profound development challenge.

In his words, “It costs the authorities and individuals as well groups everywhere in the world a lot of financial resources to build testing centres and treatment centres and a lot of money to train the personnel to handle the situation. In Anambra State we train not just doctors, pharmacists, lab scientists and nurses in the management of COVID-19 but also ward cleaners and ambulance drivers because they also have a vital role in the value chain.

“There have been lockdowns in different jurisdictions of the world which brought untold hardship to people and businesses as well as governments, thereby arresting the pace of development.”

Chief Obiano advised the people to comply with such COVID-19 requirements as constant wearing of face masks which will cover their faces and noses, regular washing of hands regularly with running water and soap and keeping social distancing of two metres, so as to avoid a situation which can cause the authorities to impose heavy restrictions in the overriding public interest.