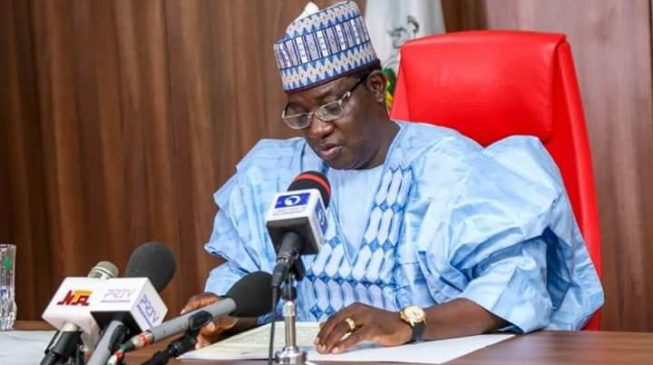 The Plateau state governor, Simon Lalong, has reiterated his government’s decision to develop a state-owned peacebuilding model, and therefore encouraged communities in conflict to bring forward their own model that is “workable” in their localities.
The governor stated this during a one-day capacity building training for members of the Miango Internal Security Peace Committee, held on Monday at the Plateau Peace Building Agency(PPBA).
Represented by the Secretary to the Government of the State, Dr Danladi Atu, Lalong urged the committee to remain resolute as there are persons who “reap” from the conflict.
He expressed the governor’s pleasure on the decision of the Irigwe community to drive the peace process and that the Irigwe model for peace would be replicated in other areas if it works.
According to him, for peace to be achieved, it must be community-driven.
Lalong re-emphasized that the critical pillars of his government is peace, development and good governance and that if need be, the only legacy he hopes to leave behind is peace.
In his opening remarks, the Director-General, Plateau Peace Building Agency, Dr Joseph Lengmang, lauded the efforts of the Irigwe community towards peacebuilding.
He said the idea behind the training was to have in place a structure that is driven by people of the locality with the mandate to ensure that those issues were resolved.
Lengmang said the Irigwe peace committee was community-driven and has the blessing of the government.
He, therefore, called on the committee to assess what they have been doing and have the Mercy Corps to mediate.
In his remarks, Alhaji Sani Suleiman of the Mercy Corps stated that there was no better way of strengthening peace than having a community level structure to harness peace.
According to him, Mercy Corps was implementing a USAID program called, Community Initiatives to Promote Peace, in which Bassa LGA falls within their sphere of operation.
The Chairman, Miango Internal Security and Peace Committee, Chief Richard Adamson, stated that Irigwe community was known for peace as acknowledged by the colonial masters, until recently when the peace was broken.
“We have vowed as a committee that this bloodshed must stop”, he promised.
He added that the commitee had inaugurated six sub-committees to ease their work and called for “mobilisation” by the government in order not to create a vacuum in their work.
Also present at the event was the Director-General, Research and Documentation, Office of the Governor of Plateau state, Prof. John Wade.