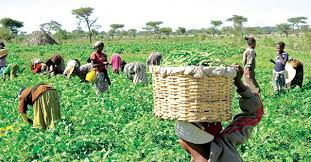 Gombe State Government is yet to release the N35 million it budgeted for women farmers in the state. The women are now calling on the government to release the funds allocated to the Small Scale Women Farmers Organisation in Nigeria (SWOFON) in its 2020 budget.

This is filtering into the open as SWOFON, ActionAid Nigeria (AAN), and others are calling on the Kogi State Government to measure up its budget for agriculture to a minimum of 10% as recommended by the Maputo Declaration.

The Maputo Declaration is a series of agreements signed by member countries of the African Union in 2003 as a response to the stagnation of African agriculture.

Signatories to the deal agreed that 10% of the public expenditure budget should be spent on agriculture in an effort to increase agricultural productivity.

SWOFON and other stakeholders observed that Nigeria, including Kogi, has not met the minimum benchmark since the country ratified and adopted the declaration in 2003.

In a communique released after a one-day consultative meeting on public financing of agriculture held in Lokoja, the Kogi state capital, and organised by ActionAid, the stakeholders urged the government to play ball.

Among are representatives of civil societies, the Kogi State House of Assembly, agricultural financial institutions, Kogi Agriculture Development Project (ADP), and the state Ministry of Agriculture

The communique was signed by the committee chairman of the Public Financing of Agriculture (PFA) of ANN, Mathias Okpanachi, the State Coordinator of SWOFON, Hajiya Safiya Yahaya, and the Executive Director of Participation Initiative for Behavioural Change in Development (PIBCID), Halima Sadiq.

The stakeholders enjoined the state government to ensure that its public sector agriculture budget follows the declaration’s minimum.

“There is also a need for the state Ministry of Agriculture to adopt innovative revenue generation strategies and block resource leakages in its bureaucratic processes,” the stakeholders say.

Continuing, they advised the ministry to improve the capacity and attitudes of public service workers in the state towards quality service delivery, noting that there must be an agreed participatory public sector policy on agriculture value chain development.

According to them, “the top-bottom approach to public sector agriculture budget development is still a major challenge in ensuring participatory development in the sector”, they said, and also called for increased partnership and collaboration between state governments and the citizenry on mechanisms for improving public sector funding for agriculture.

While they emphasised the need for transparency and accountability to regain confidence in the agriculture sector, in Gombe, the N35 million was said to have been passed for the association but it was yet to be released, according to the State Chairperson of SWOFON, Mrs. Airudia Mamman.

Mamman says SWOFON is experiencing difficulty in accessing essential inputs and credit facilities, even before the advent of the COVID-19 pandemic.

Adding, she said the pandemic has further complicated the group’s plight with no signs of financial assistance in view. “We are appealing for timely disbursement of the N35 million allocated for SWOFON in 2020 state budget

“The amount allocated for SWOFON if released will go a long way in boosting food production in the state, particularly among women who produced over 60 percent of the food consumed.”

Meanwhile, Governor Yahaya Inuwa’s administration has been commended for its efforts in boosting agriculture through input distribution in the state. The group has accordingly pleaded for the release of allocated funds, and support for women farmers.