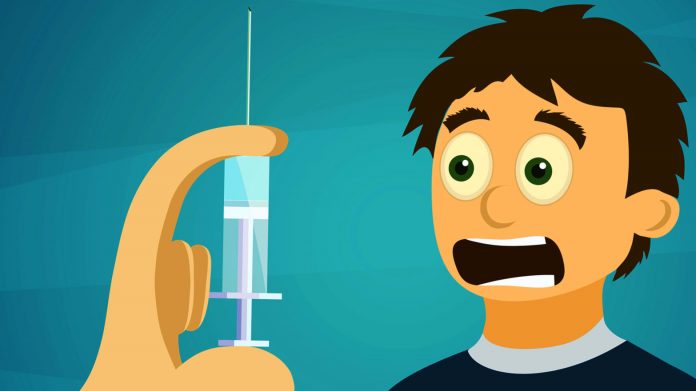 If you dread getting an injection or having a blood test, you’re not alone. While nobody enjoys medical procedures involving needles, some fear them more than others.

Being afraid of needles is medically known as trypanophobia, yet most people generally refer to it as ‘needle phobia.’ This persistent, irrational fear relates to a phobia of needles specifically used in medical procedures like injections or blood tests, and it can lead to avoidance of the feared object (needle).

There are many symptoms related to a phobia of needles, and they can affect women both physically and mentally. Here are some of the most common symptoms:

High blood pressure and increased heart rate, which can both quickly drop

It’s important to remember that these symptoms can also occur long before a medical procedure is due to take place. For instance, you may start to feel anxious and emotional when told about a future medical procedure that you’ll need. Even just thinking about the needle can bring on these symptoms, though they tend to become much worse when you actually see a needle.

How to overcome a fear of needles and injections

Phobias are the most common anxiety disorder in the United States, and it’s estimated that at least 5–10% of the population is affected by a phobic disorder of some kind. Women are twice as likely to have specific phobias as men. The cause of phobias is most likely multifactorial, with genetic and neurochemical factors playing a role.

It’s important to remember that while it can be distressing and debilitating, you’re not alone in your phobia of needles. But by taking the time to address each symptom and using some simple techniques to reduce them, you can slowly overcome your fear. Here are just a few ways of getting over needle phobia:

This technique can help if you think you might faint during your appointment, or if you’ve ever fainted during a medical procedure before. By essentially getting your blood pressure back to normal, it could prevent you from fainting or help you to recover faster after fainting.

Try to find somewhere that’s comfortable to sit or lie down. Tense your arm, leg, and torso muscles for around 10–15 seconds, or until your face, head, and upper body feel warm. Relax for up to 30 seconds, and then repeat this three or four more times. Try not to tense the muscles in your head or face, as this can lead to headaches.

You should aim to practice this applied tension technique four or five times a day for at least one week. Try to set aside the same time and place each day so that you become completely familiar with the practice. Eventually, it will become second nature to you and kick in automatically.

An alternative technique is learning to control your breathing to reduce your increased heart rate, breathing, or sweating.

Find somewhere to sit in a comfortable position and relax your head and shoulders. You might focus better by putting one hand on your lower abdomen. Slowly and calmly, breathe in through your nose and then release the breath through your mouth. Try to breathe as deeply as you can without forcing it. Repeat this at least five times.

If you can, try to practice this technique at least three times a day.

Putting together your own fear ladder can help you deal with each element that makes up your fear of needles. This exercise uses a combination of all the techniques mentioned.

You should start at the bottom of the ladder and break down your fear into smaller elements in order of severity. Your most intense fears should go at the top of the ladder, while the fears you worry less about should be placed at the bottom. Now, rate each fear from 0–10, with 0 being the easiest for you to face.

Once you’ve created your very own fear ladder, you can start to climb it. Start at the bottom and think about that particular fear, in this case, needles. You may feel your anxiety levels rise, but wait until it begins to fall — which it will, in time. Use the applied tension or breathing for relaxation techniques to help.

Once you’re comfortable with one fear, move up the ladder and onto the next fear. Don’t worry if you stay with one fear for a long time — it’s not a race. Some fears may take much longer to overcome than others.

Blood tests and jabs help save lives all around the world, so being able to face your fear of needles is important. Don’t feel embarrassed about seeking medical help as it’s never too late to start dealing with your fear head on. By putting some of these techniques into practice, you can help yourself overcome your phobia of needles one step at a time.