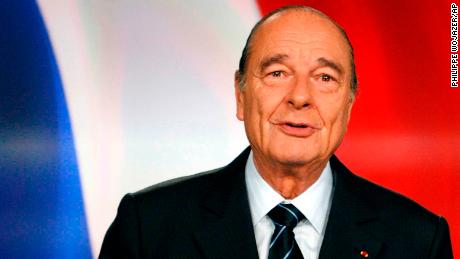 France’s former president Jacques Chirac, a center-right politician who ruled the country between 1995 and 2007, passed away on Thursday at the age of 86.

The veteran politician “died this morning surrounded by his family, peacefully,” his son-in-law Frederic Salat-Baroux told the AFP news agency. He did not specify the cause of death.

Chirac was the standard-bearer of France’s conservative right, and mayor of Paris for nearly two decades. He was nicknamed “Le Bulldozer” early in his career for his determination and ambition. As president from 1995-2007 he was a consummate global diplomat but failed to reform the economy or defuse tensions between police and minority youths that exploded into riots across France in 2005.

Under his presidency, France entered into the single European currency and abolished compulsory military service. Chirac also cut the presidential term of office from seven to five years.

Chirac health had been deteriorating ever since he suffered a stroke in 2005 while still in office. He has largely stayed outside the public eye after being succeeded by Nicolas Sarkozy in 2007.