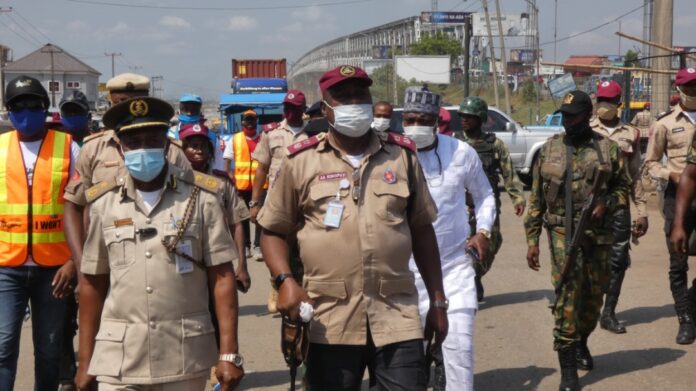 Awka – The Federal Road Safety Corps is to deploy 720 personnel and 670 special marshals for robust traffic control activities across Anambra State during the Christmas and New year celebrations.

The FRSC Sector Commander, Andrew Kumapayi disclosed this on Monday in Onitsha, during the inauguration of Ember Months Operation in the state.

The launch of the operation which is an annual exercise of the FRSC, took place at Onitsha Bridgehead and is aimed at achieving safe motoring environment and free flow of traffic across the state during the Yuletide.

The theme of this year’s Ember Months Operation is ‘Drive Safe to Stay Safe’.

Kumapayi said Onitsha Bridgehead was chosen for the launch of the operation because of the strategic nature of the bridge and the challenge of massive gridlock usually experienced at the bridge during festive periods.

He said the Ember Months campaign will focus on traffic control until the year 2021.

“What we are assuring motorists is that the focus will be traffic control on Onitsha Bridgehead. There will be no enforcement or stopping of vehicles on the bridge. This Ember Months campaign will also have two camps for FRSC officials to ensure 24 hour traffic control activities. We want to make sure that no motorist sleeps on this bridge as a result of traffic gridlock,” he assured.

Governor Willie Obiano who was represented by the state Commissioner for Transport, Adam Mbanefo observed that the Onitsha Bridgehead usually experience gridlock during festive period because Anambra is a gateway into the southeast and to many other parts of the country.

He explained that the Ember Months Operation is a joint exercise that will integrate inputs from all security agencies across the state.

“This operation is to sensitize motorists that it is not going to be business as usual. Anambra is a hub for business activity in the southeast and this bridge is like an inter-connect for all the states in this region. This is a joint effort by all the security agencies and this year is special because of the critical measures being taken by the FRSC, Anambra State Government and other security agencies,” Mbanefo said.

The Commissioner assured that the State Government is engaging the Federal Government to ensure that all Federal Roads where work is ongoing is completed to ensure free flow of traffic across the state.

On his part, the Delta State FRSC Sector Commander, Uchechukwu Wihioka, represented by the State Sector Head of Operations, Fatai bakare, assured that they will partner Anambra on the initiative through provision of toll trucks to remove spoiled vehicles that may pose obstruction to free flow of traffic.

He urged motorists to shun overspeeding, over-confidence, driving during odd hours when rescue can be very difficult and other attitudes that can cause road mishap.