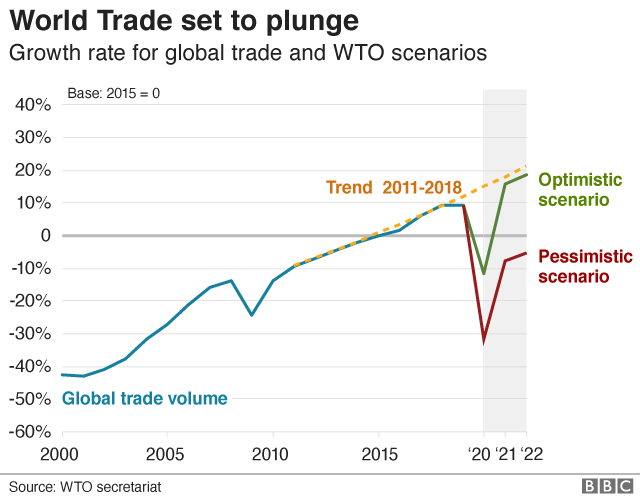 The World Trade Organization (WTO) has said that drop in the world is growing worse and is predicting a severe decline in international commerce this year than the 2008 experience.

In a new report, the WTO forecasts a contraction of between 13% and 32% this year.

The wide range of possibilities reflects the uncertainties about the health crisis.

It said the impact on trade is likely to exceed the slump caused by the financial crisis just over a decade ago.

The more pessimistic case would amount to a decline in global trade similar to what happened in the great depression 90 years ago but in a shorter period.

The WTO’s director-general Roberto Azevedo described the figures as “ugly”.

“There is no getting around that”, he said. He said the situation was first and foremost a health crisis and he acknowledged that governments had to take steps to protect people’s lives.

“The unavoidable declines in trade and output will have painful consequences for households and businesses, on top of the human suffering caused by the disease itself,” he added.

A decline of 13% in trade in goods is described in the report as a relatively optimistic scenario. It reflects a steep drop in trade followed by a recovery starting in the second half of 2020.

That, of course, would need to be based on substantial progress over the next few months in getting on top of the health crisis.

That is not guaranteed, so the report includes a much more pessimistic case which reflects a steeper initial decline and a more prolonged and incomplete recovery.

The report also warns that “the extent of uncertainty is very high, and it is well within the realm of possibilities that for both 2020 and 2021 the outcomes could be above or below these results”.

The report said that the growth in global trade had already stalled towards the end of last year. By the final quarter of 2019 goods trade was 1% lower than a year earlier.

The WTO said this was the result of “persistent trade tensions”, a reference that to a large extent reflects the confrontational approach to international commerce taken by the administration of President Donald Trump.

Mr Azevedo said trade would be an important ingredient in the economic recovery after the crisis. He said keeping markets open and predictable would be critical.

COVID-19 Crisis: What We’ve Been Doing Backstage, By ILO’s Director