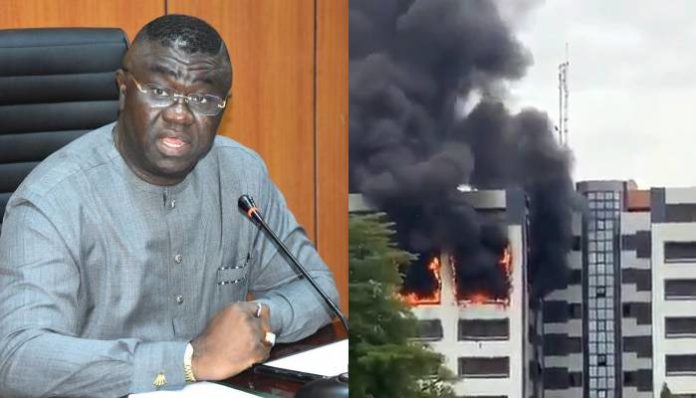 Nigerians can, at least, heave a sigh of relief, as the Minister of State for Budget and National Planning, Prince Clem Ikanade Agba, has confirmed that the nation’s financial records were not lost in the fire that gutted some offices in the Treasury House.

The Treasury House, in Abuja’s Central Business District, is the multistorey building that accommodates the office of the Accountant General of the Federation (AGF).

According to initial reports, offices on some floors of the building went up in flame on Wednesday morning due to a power spark from an air conditioner in one of the offices on the fourth floor.

Briefing some newsmen at the Treasury House shortly after embarking on an on-the-spot assessment of the building, Prince Agba said that the Data Centre was not intact as it was not affected by the fire.

He said that even if the fire had affected the centre, Nigerians would not have needed to worry as there was a backup database from which financial data or records could be recovered or retrieved.

According to Agba, “while we were at the National Assembly with the Minister of Finance, Budget and National Planning and our other colleagues, briefing the Federal Legislature on our proposals for a supplementary budget, we got a call that this building here was on fire.

“So, I had to immediately leave just to have first-hand information as to what is going on. I am glad to report to you that when I got here, first and foremost, I met that the fire had been put out by the Fire Service in combination with the Fire Services from the Central Bank of Nigeria, FCT Fire Service, NNPC, Julius Berger and also the military.

“All these efforts were led by the Federal Fire Service. I have been briefed that the fire started around 10 am in an office on the fourth floor.

“An officer came to the office; he said he put on the air conditioner and there was a spark; he noticed smoke and he immediately put it off, but it was still smothering; so, he had to rush out to get some help.

“The Federal Fire Service were called about 10:10 am and they responded within four minutes with three fire trucks. However, there was a little bit of difficulty in getting inside the building because they thought they should fight the fire from both outside and from inside.

Agba stated further, “We have gone round the offices where the fire affected and I am glad to report to you that our Data Centre, where all our records are kept, is fully intact. There is no destruction and, so, we have not lost any record.

“I also should remind you that for a while now, we have gone digital; yet, we have some records that are kept manually but a lot of what we do is online.

“But the only thing that has happened today to the Data Centre is the exterior where we have the cooling units at the back. You know that the Data Centre always has to be cool.

“So, one of the immediate steps we have taken is to shut down the Data Centre since the cooling units are not functioning optimally.

“We have directed that those cooling units should immediately be put in order so that we do not lose anything in that Data Centre.

“As a government, I just want to assure you that our records are intact. A few documents are burnt. We have not started recovery to check what was burnt and what was not burnt. But All our financial transactions are intact.

“We would be doing a full-scale investigation using the right professionals just to determine exactly what happened because what I am telling you now is what I have been told.

“So, the professionals will be able to tell us whether it was from the air conditioner or it was something that was induced.”

Accountant General of the Federation, Mr Ahmed Idris, who was with Agba at the briefing corroborated the minister’s assertion that the Data Centre was intact, stressing that they were working hard to fix the cooling system of the Data Centre which was affected by the fire.

“We are glad that there were no human casualties. Our physical records can be easily replaced because we have them online real-time,” he stated.