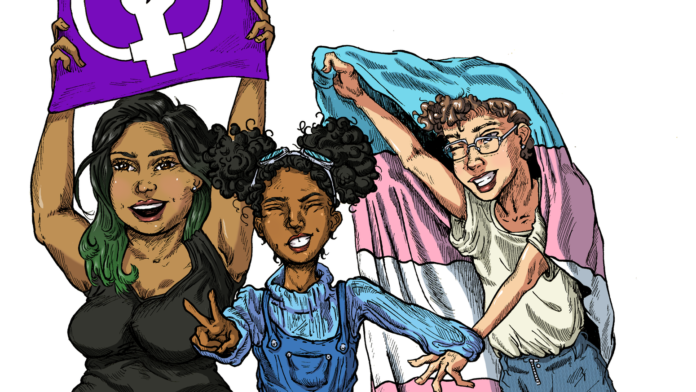 There have been a lot of terrible misconceptions about “Feminism” especially in Nigeria. Whenever a Nigerian lady opens her mouth to admit that she is a feminist, the first thing that comes to our mind is that she is an angry and isolated woman who “hates” men.

First, I wouldn’t blame those who think that way because here in Nigeria, most women don’t really understand the true meaning of being a “feminist”. Most of them think feminism is all about oppressing men, being unmarried because they don’t need a man in their life. There was a post I saw on Facebook the other day. The lady narrated her experience with one of her boyfriends. When guy visited her, there was no food at home. The lady was busy watching a movie with her laptop. Dude complained that he was hungry and she should at least prepare something for them to eat, guess what the lady did? She told him to enter the kitchen and prepare something for himself if he was really hungry. She ended the post by saying something like, “Ladies, we have to stand up for ourselves. We don’t belong to the kitchen”.

When I read that post, I was blown away by the stupidity and ignorance of the poster. Like how can someone be that dumb? First, what is wrong with you as a lady cooking for your man? You guys are in a relationship for crying out loud. In fact, does he even need to remind you to prepare something for him to eat before you do so? Why attack him because he asked for food? What is wrong with our Nigerian ladies advocating for feminism? Why do they come off as man-haters?

Truth is that “feminism” is not and has never been a movement against men.  Women need men in whatever capacity just as much as men need women. We all need each other. Seriously, I think it is ignorant to believe that as a feminist you must hate men. The one that amazes me is when some ladies assume that because they are feminists, they should be independent, strong; ditch their emotions because they don’t need a man in their life. As a lady, is it even possible to stay without a man? How would you even cope sexually? There is even this misconception that when a lady is in love with her husband, choose to give up her career to raise her kids then she must not be feminist.

Feminism was never a move to oppress men but to liberate women. Feminism is not hating, insulting or attacking men. Feminism doesn’t stop women from submitting to their husbands. Those are wrong perceptions of feminism.

All that feminism does is that it questions limitations based solely on gender.

You can be a feminist and yearn for love and marriage.

You can be a feminist and decide not to get married for reasons best known to you.

You can be a feminist and be a housewife or career woman. The choice is yours.

Feminists are not a bunch of bitter isolated women who hate men. Let’s be properly guided.