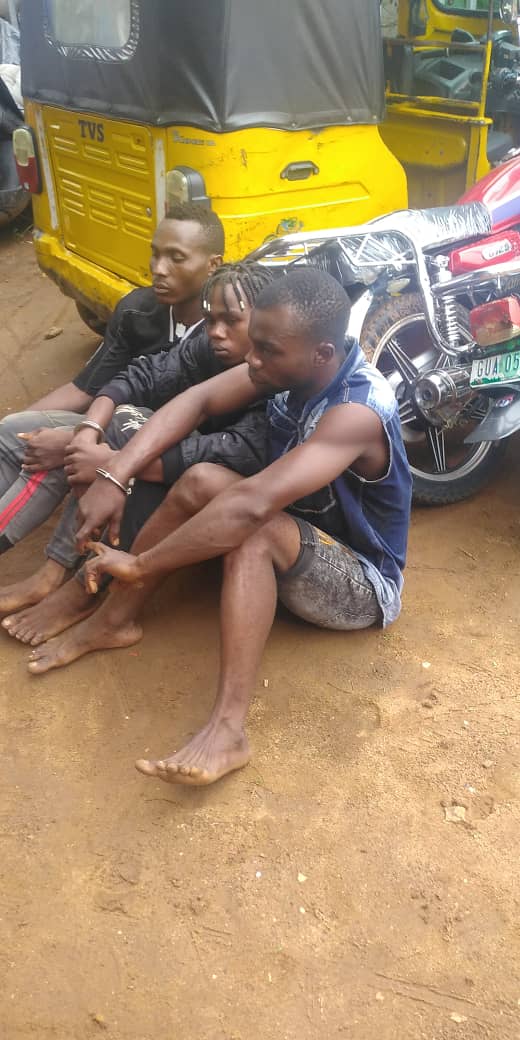 The three-man gang were arrested following a tipoff from the public.

Isiagu ring road has been a blackspot notorious for incessant blockage and robbery by armed gangs.

The Public Relations Officer of Anambra Police Command, Haruna Mohammed said the trio at about 7:45 pm Friday, allegedly waylaid and robbed one Uyana Ikechukwu of a cash sum of Forty-five thousand naira (#45,000) and other valuables at gunpoint.

“On the 3rd of April at about 11:15 pm, following complaints of incessant blockage of Isiagu road Awka, Puff-Adder operatives in conjunction with the Command Special Anti Robbery Squad(SARS) while acting on intelligence arrested the following suspects. They include Ikechukwu Ani aged 27 years and Ifeanyi Wisdom aged 26years both of Nkwelle Village Awka and Daniel Obaru aged 28 years of Emma Nnaemeka Street Umudioka, Awka.

“Exhibits recovered in their possession includes two motorcycles, one tricycle, machete, one locally made shotgun and a cash sum of #45,000 snatched from the victim,” he revealed.

He said the suspects had equally confessed to the crime, and the case is under investigation after which they would be charged to Court for prosecution.

“The Commissioner of Police, John Abang reassures Ndi Anambra that the Command under his watch will continue to make Anambra State unbearable to the criminal elements until they repent or relocate from the State,” Mohammed said.