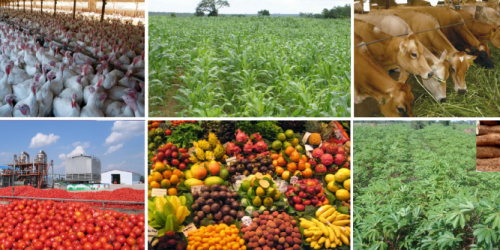 Weighed down by the harsh effects of the COVID-19 pandemic, most agribusiness operators in Nigeria say the rampaging virus is running them out of business.

National President of the Catfish and Allied Fish Farmers Association of Nigeria (CAFFAN), Rotimi Olibale Oloye, is calling on the government to address the problems that have arisen as a result of the pandemic.

While pointing out that agribusinesses now depend on social events, Oloye added, “our product is mostly used for social events, thus the COVID-19 measures on large crowd has very serious negative effects on our business.”

“It is essential for the government to work out support for us because most of us are already out of jobs as our entire capitals have gone with the continuous losses recorded in the past three months. The few sales made were at a loss”, he said.

The appeal is coming as Dantata Foods and Allied Products has announced its plan to partner with the Centre for Dryland Agriculture (CDA) at the Bayero University, Kano, to revamp dryland agriculture in the country.

CDA’s priorities are to create more effective multi-disciplinary and multi-institutional research to strengthen the capacities of the institutions and individuals. The Centre is one of the newly established academic centres and institutes at Bayero University.

In February 2012 Bayero University won a competitive grant from MacArthur Foundation to support the establishment and activities of the Centre in the first three years. This support is under the MacArthur Higher Education Initiative in Africa which is geographically focused in Nigeria and Madagascar, where the Foundation works with leading universities to strengthen them as Institutions and advance their contributions to the development of Africa.

The Foundation hopes to build up university departments or centres and integrate them into graduate training and research disciplinary networks involving other universities and institutions in Africa and beyond.

However, dryland farming is the cultivation of crops without irrigation in regions of limited moisture.

Both parties have sealed a Memorandum of Understanding (MoU) in Kano, with the Chief Executive Officer of Dantata Foods, Tajudeen Dantata, present to drive home the importance of the deal.

“About 100,000 farmers are expected to benefit from the studies aimed at enhancing effective utilisation of agriculture and water resources. Through the partnership, we will ensure quality assurance in the production of inputs and other products in accordance with international best standards’’, he says.

Adding, he said, ‘’there are certain parameters of some products that are in control, which you will not be able to export to Europe and other Western countries.”

Vice-Chancellor of Bayero University, Prof. Yahuza Bello, notes that the partnership will totally reinvigorate the application of modern farming techniques in the country.

Bello noted that the varsity’s CDA was established with the intent of accelerating the revitalisation of agricultural technologies and to boost crops and livestock production in Sub-Saharan Africa.

“The Centre, as part of its objectives, will support graduates who will be able to engage themselves in production and research on dryland agriculture, to provide relevant and appropriate solutions to the regional agriculture and development problems”, the vice-chancellor says.

Meanwhile, General Manager of Tuns Farms in Osogbo, Osun State, Taofeek Badmus, is also lamenting over the inability of the farm to sell most of its products because most off-takers were off business.

While Badmus noted that the cost of scaling feeds for poultry production has made its sustainability difficult, he added, ‘’the truth is that we are facing the brunt during this time. The cost of raw materials has seen a steady rise while the cost of the final product has been stagnant.”

He explains that the closure of hotels, event centres, and functions as occasioned by the pandemic has affected sales of farm products, especially for owners of large farms.

“Sales have reduced drastically. There is also a glut of produce now, and everybody is now forced to sell at lower prices. Our experience was particularly painful during the lockdown as we kept on feeding birds and there was no market to sell them”, he said.

Managing Director of Agrecourse Limited, Ayoola Oluga, is holding the same view, noting that gains made by farmers following the Federal Government’s closure of Nigeria’s land borders with Benin Republic in 2019 were going down the drains.

According to him, the advent of COVID-19 has seen the emergence of a new set of problems. “Some farmers have continued to find it difficult to sell their produce, especially fish farmers. This is mainly due to the shutdown of the hospitality sector where you find the major off-takers.”