Bettie Jenifer, the late wife of Ghanaian Actor, Chris Attoh, who was shot dead in Greenbelt, Maryland on May 10, 2019, was married to two men, one of whom is a notorious drug lord currently serving a 20-year jail term.

According to reports from the Greenbelt Police Department, Jenifer has been chased through the parking lot of her office building at around 5:00 p.m before being shot in the head in a targeted and not a random incident.

Police also confirmed that the deceased was married to Kedrick , a drug lord who is in jail serving a 20-year term over drug-related issues.

The drug lord had reportedly filed a motion for Beetie to account for assets and for an injunction to prevent dissipation of assets. 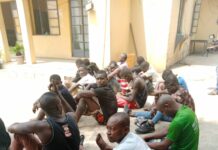