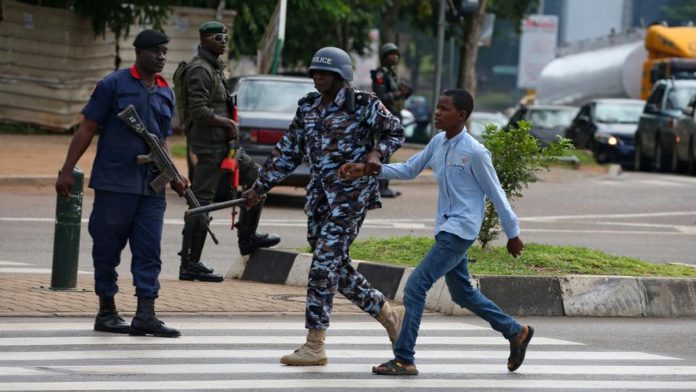 Human Rights Watch says in its efforts to defeat Boko Haram, Nigerian authorities have been allegedly arresting and detaining citizens suspected of involvement with the armed group, Boko Haram. The detainees, according to the global rights group, include thousands of children. But, when the Children’s Rights Advocacy Director of the rights group, Jo Becker, spoke with some of the detained kids, Human Rights Watch said it became clear that many were actually victims of Boko Haram. Becker speaks with Amy Braunschweiger about how the children ended up in military prison for months or even years, and how the prison conditions they endured are the worst she has seen in 20 years at the Human Rights Watch. Enjoy the interview:

Tell me more about these children who were arrested.

I interviewed a 10-year-old boy who was detained when he was 5. Many of the girls and women who were detained had been forced to marry Boko Haram fighters and had children, so there were babies and toddlers in prison with their parents. And in the boys’ cell, having children of 7 or 8 years old was pretty common.

Why were they arrested?

Many of these children said they were picked up by the military as they fled their villages after Boko Haram attacked or when they were seeking refuge in IDP [internally displaced persons] camps. Children told us they were picked up on the flimsiest of evidence. One boy I met was detained for more than two-and-a-half years because he allegedly sold yams to Boko Haram. Two or three children I spoke with said authorities arrested them as suspected Boko Haram because they fled their village late after an attack, but they told me they were too scared to flee earlier. Men and boys of fighting age – adolescents or even young teenagers – quickly come under suspicion for being Boko Haram.

Several girls we spoke with were abducted by Boko Haram and were forced to marry Boko Haram fighters. And even after they escaped, instead of returning these girls to their families, the military put them in prison as suspected members of the group.

What happened to them in prison?

We didn’t have access to detention facilities. We spoke with children who had been released. All had been detained at the notorious Giwa barracks in Maiduguri, the main military prison in northeast Nigeria. The conditions they described were really shocking to me. Even working at Human Rights Watch for 20 years, these conditions were the worst anyone has told me about.

What stood out to me was the severe overcrowding. They had 200 to 250 kids packed into a room that was 10 x 10 meters, they said. They barely had room to sit. They had to sleep on their sides, lined up next to each other. One child said they were “like razor blades in a pack.” Another told me, “we were packed so closely together you couldn’t fit one finger between one person and the next.” Once you went to sleep, it was impossible to move until the next morning.

All of these children shared a couple of open toilets or buckets. The stench was terrible, the children we spoke with said. Additionally, the average high temperature in that area is 35 degrees Celsius and can go over 40 degrees. The cells were poorly ventilated, and children said detainees would often faint from the heat.

Many of the children also described deaths in detention, seeing bodies taken from cells by soldiers in the morning.

What else happened to them?

None of the children I spoke with had been taken to see a judge. They’d never been taken to court. Only one saw someone they thought might be a lawyer. They were never charged with a crime. Many had no contact with their families. After their release, many found their families assumed they were dead. The whole process appears so cruel and senseless. They’re locked up for months or even years without charge or due process or any idea what is going to happen to them. Some of the kids talked about losing hope that they would ever be released.

I did a similar report on children detained in Iraq a few months ago. There, the big headline was that kids were tortured into confessing to ISIS involvement. But there they were charged and went to court. And while what happened to them didn’t meet any standards of justice, there was some legal process there. In Nigeria, there was nothing.

Were there any children who stood out to you?

What are the children doing now?

Most say they want to go to school, but it’s hard. For some, schools are too far away or they don’t have money for transportation. Others are working or would like to set up a business. None of the children I met want to have anything to do with Boko Haram.

What should be done to help these children?

Children who are affected by armed conflict need rehabilitation and reintegration into their communities. That’s a principle well-established in international law, including for children who may have fought. The bottom line is that these children should not be in military detention. They should be handed to civilian authorities, go back to school, be reunited with families. And if there is evidence that a child has committed a crime, they should be treated according to juvenile justice standards.

How did you learn these children were being arrested?

Every year the UN Secretary General releases a report on children in armed conflict. And the past few years, we’ve been alarmed at the number of children being detained for suspected involvement in armed groups in many countries – especially in countries where the armed groups are considered terrorist groups. Nigeria shows up as having one of the highest rates of detention of children, which is why we wanted to check out what was happening to these kids.

This disturbing trend is part of an erosion of a previously accepted principle that children involved in armed conflict should be treated primarily as victims, not perpetrators. But in the context of countering extremism, governments are ignoring that principle and punishing children instead of rehabilitating them.

What are the main countries detaining children?

Outside of Nigeria, it’s Iraq, Afghanistan, Somalia, and Syria – although it’s hard to know the numbers in Syria. We just put out a report on Iraq’s practices on detaining children in March.

What would you tell these governments?

None of the children that I spoke with in Nigeria had any sympathy for Boko Haram. Their primary concerns were getting back into school and getting jobs so they could make a living. When governments detain children as part of counterterrorism efforts, they make it harder for kids to get on with their lives. They’re also more likely to foster resentment of the government in these kids.

On the advocacy side, some of Nigeria’s neighboring countries, Chad, Mali, and Niger, have signed what’s called a hand-over protocol with the UN. This is a commitment that when children are apprehended by the military, the soldiers hand them over to civilian authorities. An immediately step Nigeria can take is to sign a hand-over protocol and release any children who are still in detention to civilian authorities.