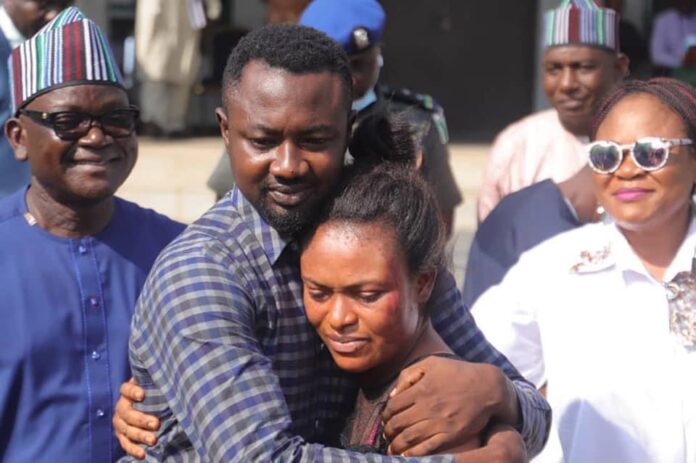 The last may have been heard of the crisis between Benue State Channels TV Reporter, Pius Angbo and his wife, Ifeyinwa Angbo after Benue State Governor, Samuel Ortom on Monday reconciled the couple.

Mrs Angbo had over the weekend, released a video online where she showed her battered face, claiming she was beaten by her husband.

In the video, the wife alleged that her journalist husband had persistently assaulted her for the past five years even when she was heavy with child, noting that prior to their marriage, the husband had written an online post, thanking God for saving him from the spirit of violence and women battery.

Hours of close-door meeting with the Governor today, at the Government House, Markudi, saw the couple step out to what could be anticipated to be a new life, judging from their appearance.

Governor Ortom while addressing newsmen after meeting with the couple, counseled them to always settle their differences amicably and shun the temptation of engaging in violence.

According to him, “as a young couple with great potentials, the husband being a versatile journalist and the wife a medical doctor, there is the need for them to foster a strong union to serve as models to others.”

Mr Angbo in a reaction, said he had apologised to his wife over the assault on her, stressing that he also sought the forgiveness of the entire women folk and would make amends going forward.

On her part, Mrs Angbo said she had accepted her husband’s apology and forgiven him, saying their children are still tender and they needed prayers to grow stronger in love and nurture their kids to maturity.

“I want to sincerely appreciate Governor Ortom for taking time out of his very tight schedule to make peace between me and my husband. The Governor’s intervention was fatherly and a demonstration of love for us as his children,” she said.