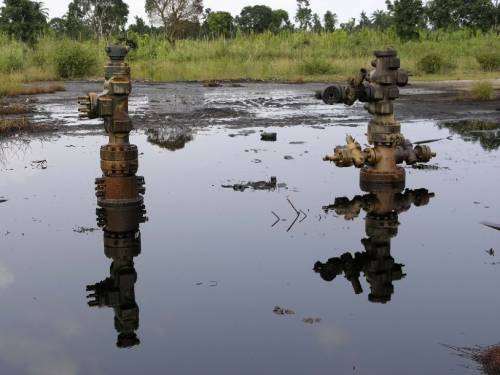 Kolo Creek communities in Bayelsa State have cried out for urgent help, claiming that they are suffering from the harmful effects of oil pollution.

They are accordingly appealing to their state government and the Niger Delta Joint Task Force to save them from continued harm.

Fourteen communities in the area have been receiving crude as a fallout of activities of illegal artisanal refiners with the worst polluted being Otuasega, Imiringi, Yiba-ama, and Ibelebiri.

They are lamenting that the illegal oil refining camps had impacted the Kolo Creek, which is their only source of drinking water.

Some community leaders in a field report released on Monday by the Environmental Rights Action (ERA), endorsed by an official of the environmental rights group, Morris Alagoa, say residents of the polluted communities are currently helpless.

“The main subject of discussion is how to stop the activities causing the Kolo Creek to be so polluted. But our fear, to be truthful to you, is that anybody within this area that champions the moves aimed at stopping the local refining will be attacked by those perpetrating the act.

“So, the resolution was that we are going to approach the operators and owners of the crude oil refining camps to tell them not to allow the crude oil to come down to the Kolo River.

“They should look for a way, either to dig a pit where the residue of their operations could be directed and later burnt off.

“Anybody that champions that, especially in this our area, will be attacked. But the government is bigger than they and communities will support such efforts of government”, the report says.

Some of the residents: Angelina Ngeribo and Agnes Ibugom, say they can no longer bathe in the creek or fetch water for domestic uses, stressing that the situation had made life difficult for them.

“This crude oil on our water is affecting us in many ways. There is no way to bathe in the creek again. If you venture to go in and come out your body will be oily as if you rubbed pomade. We are suffering as a result of the current condition of the river.

“We are not telling lies. When you are paddling in your canoe, all your hands, your chest, clothes will all get soiled with crude oil including your canoe”, says Ngeribo.