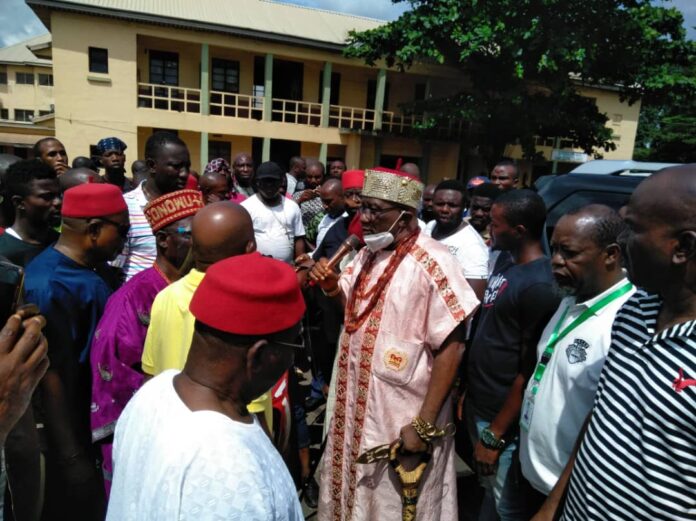 People of Idemili North Council Area of Anambra State, comprising the 10 towns in the council area, on Monday trooped out in large numbers to register the displeasure over the reckless acts of violence and arson witnessed in the LGA in the course of the ENDSARS protest.
Youths leaders and other key stakeholders converged on the Mr Biggs Nkpor axis along Onitsha- Awka Old Road from where they embarked on a protest match to say no acts of violence witnessed in the LGA.
The protest moved from Mr Biggs axis to Nkpor Junction- Afor Nkpor- Ugwunwasike Ogidi- AforIgwe Market through Ogidi Girls Road to Abaete -Ugwunwasike Road – Building Materials Market Ogidi- Tarzan Nkpor- Old Mercedes Parts Avenue Nkpor- New Parts Flyover Nkpor – Nkpor Main Market- Nkpor Junction and down to Idemili North LGA Headquarters in Ogidi.
The protest was inspired by the traditional Ruler of Ogidi Kingdom, Igwe Pharmacist Alex Uzo Onyido, Igwe Chukwudubem Iweka, the Traditional Ruler of Obosi, the President General of Nkpor, Ogbueshi Innocent Mbagha and Barr Titus Obi Akpudo, PG Eziowelleamong others.
Addressing the mammoth crowd, the Ogidi monarch, Igwe Onyido who could not control his temper, wept over the arson recorded at Prof Chinua Achebe Library Ogidi, which he described as the only monument built to immortalize the late literary icon and world-renowned novelist.
In his words, “it is a sacrilege that our icon was bastardized by the arsonists. That is why we are saying enough is enough and no to burning of public and private properties in Idemili North LGA. As Ndi Igwe and as fathers to all, its pertinent to state that the brigandage experienced in the past few days is totally unacceptable to us anymore and therefore not welcomed.”
He recalled that most police stations in Idemili North LGA were built through self-help efforts by indigenes of most towns, making reference to the Ogidi Police Station where the people of Ogidi brought out their lands for the police station and even built the borehole at the place.
“There is no doubt that these acts of violence were perpetrated by hooligans who are the real enemies of the society and that is why we are making this bold statement today with this protest that we will no longer tolerate this nonsense,” he added.
Also speaking, Igwe Iweka made it clear that as leaders and elders, they will not fold their arms and allow the killing of people, raping of women and burning of public property under the guise of ENDSARS protests.
“In Idemili North LGA, we shall not continue to allow arsonists engage in the barbaric act of killing policemen. We acknowledge that there are bad eggs in the Police Force whose actions precipitated these protests but there are good ones as well who have given good account of their stewardship. While we make our demands known to the appropriate quarters, we must as a people stand up against criminal elements who may want to take advantage of the peaceful protest to wreck havoc in our communities,” he said.
The protest match took the protesters to the Ogidi headquarters of the Council area where they were received by the Idemili North Transition Committee Chairman, Ralph Nnabuife.
Sympathizing with the Idemili people over the violence that befell them, Nnabuife regretted the unfortunate attack at the LGA Secretariat, commending the people for rising up to protect their land.
Conducting stakeholders round to inspect the level of damage and destruction done at the Prof Chinua Achebe Library Ogidi, Nnabuife noted that the library lost the ICT unit, Computers, Air Conditioner and other documents to the arson. 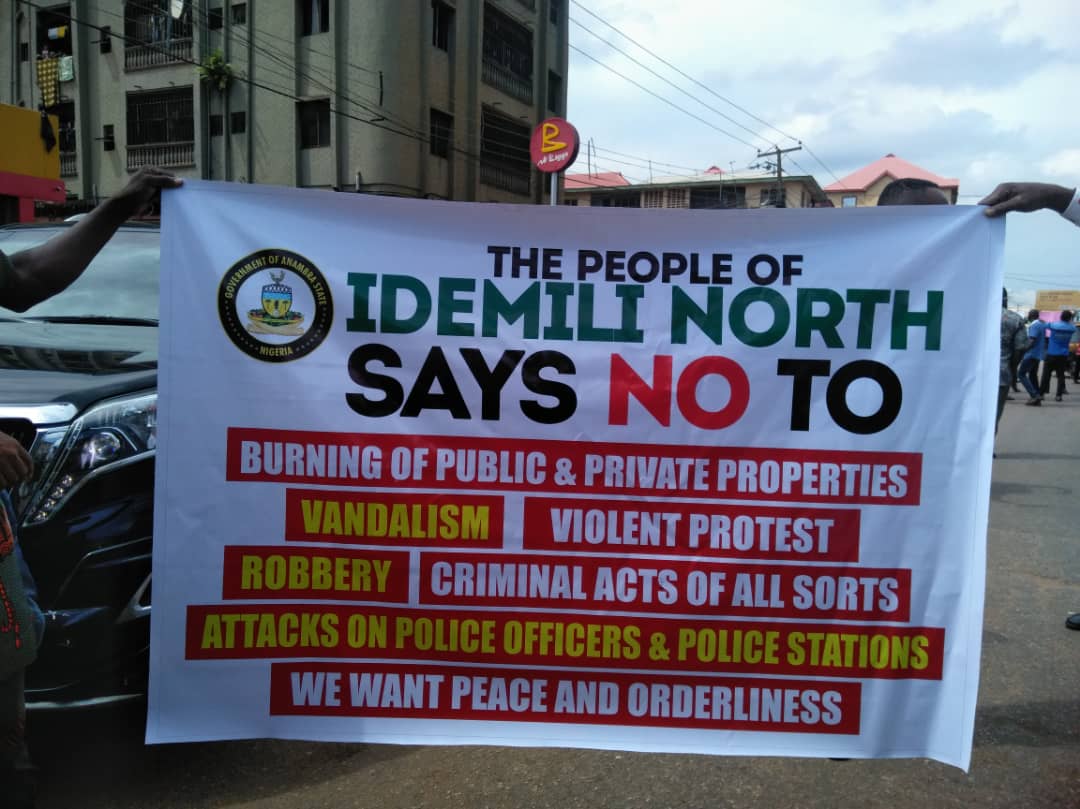 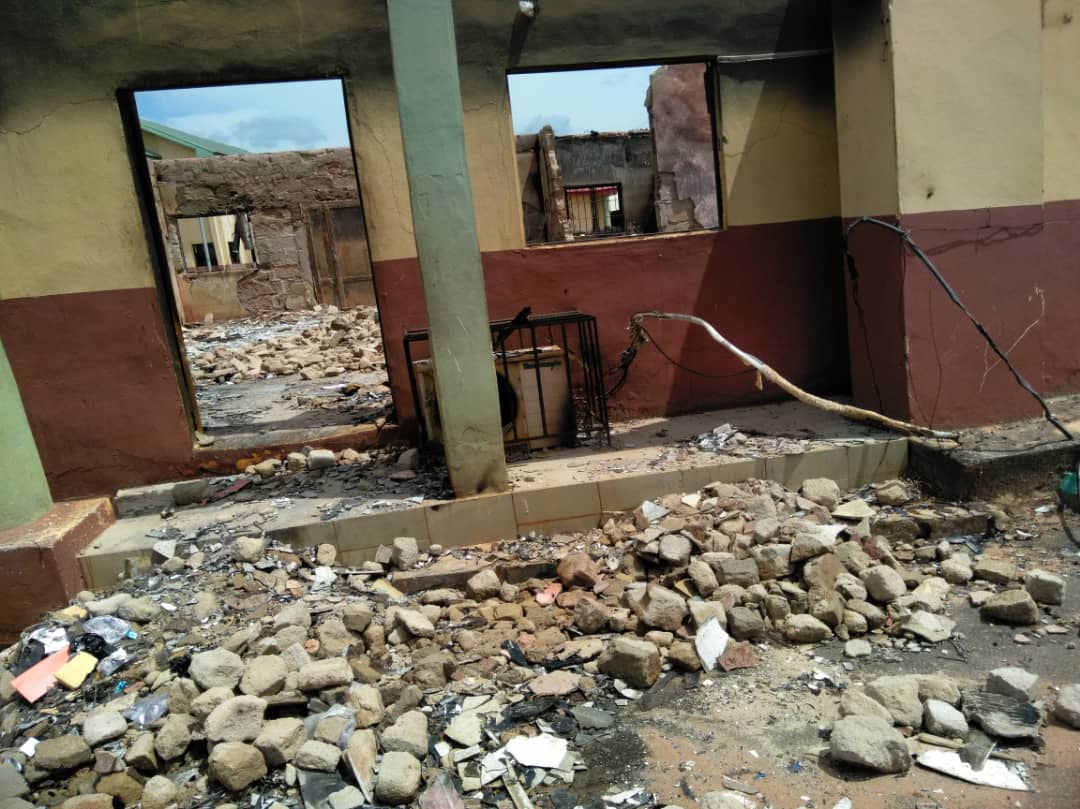 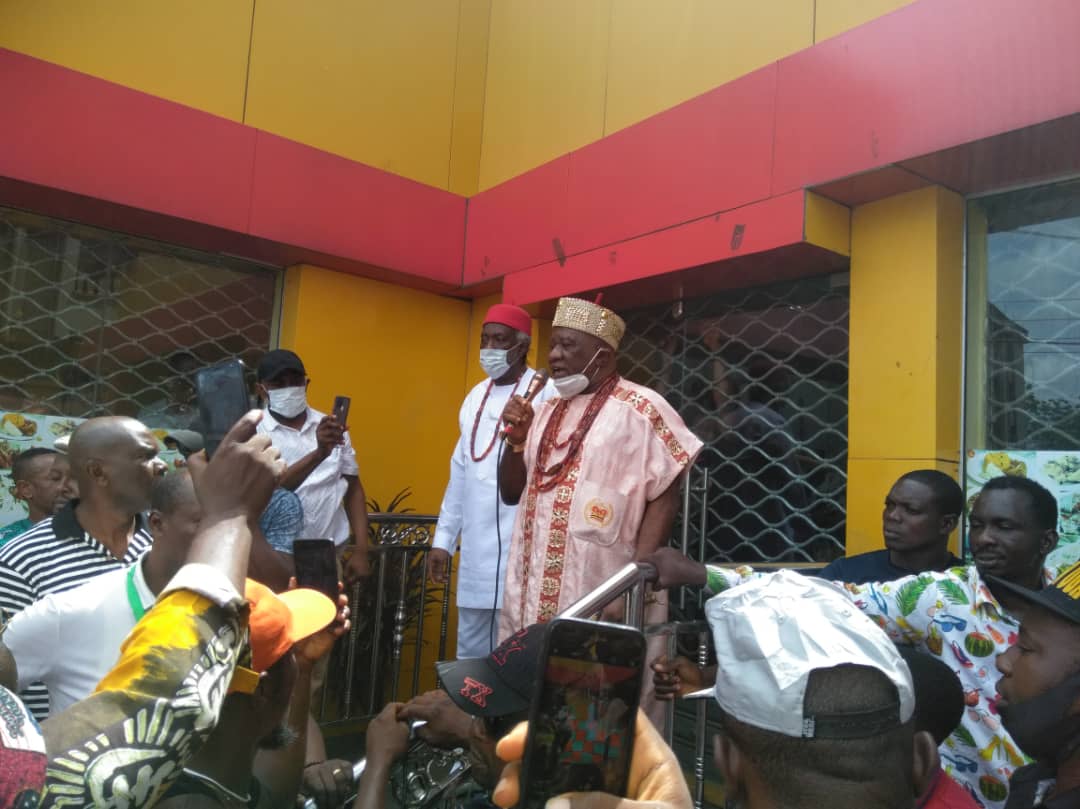 He reminded Idemili North people that the Local Government Area has ranked tops in developmental strides, wondering why hoodlums would attack the council headquarters which is not hosting any Police formation, as the arsonists targeted Police formations.
The Council Boss lauded the youths for making their voices heard on developmental issues, urging the youths to shun violent protest while giving the President a chance to implement their demands and other ongoing robust projects on youth empowerment at State and Federal Level.