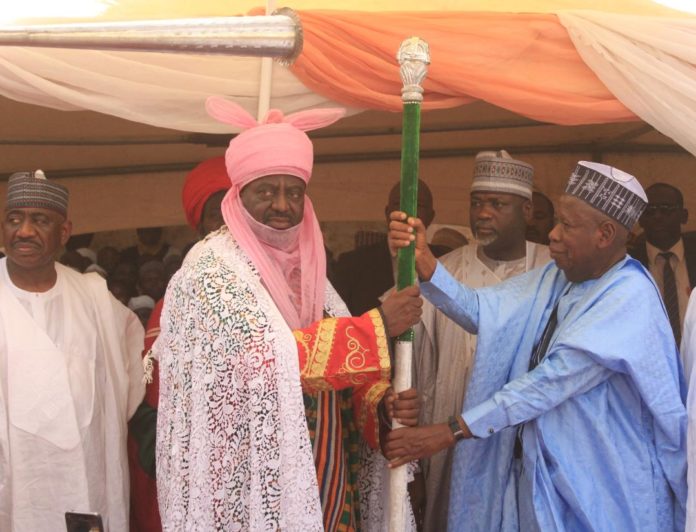 Following the dethronement of Emir Muhammadu Sanusi II by the Government of Abdullahi Umar Ganduje, Monday, the State has announced one of the sons of the late Emir, Ado Bayero, Aminu Ado Bayero as the 15th Emir of the State.

Until his selection and subsequent appointment by the Four Kano Kingmakers, Aminu Ado Bayero was the Emir of Bichi one of the four New Emirs created by the Ganduje administration.

Aminu Ado Bayero was appointed the Waban Kano by the dethroned Emir Muhammadu Sanusi II after becoming the 14th Emir of Kano some five years ago.

He was elevated from the rank of Sarkin Dawakin Tsakar Gida by Emir Sanusi II after been Turbaned by the former government of Dr. Rabiu Musa Kwankwaso late 2014.

Meanwhile, the dethroned Emir of Kano, Muhammadu Sansu II was on Monday whisked off the State amid tight security.

Before being taken away by heavy Security Personnel of DSS, Police, and Military, Emir Sanusi was put under house arrest with the Palace sealed off by the armed security operatives.

An impeccable source in the Government House had hinted that the governor was presiding over an emergency Executive Council Meeting.

Recall that Ganduje announced the removal of the former Governor of the Central Bank of Nigeria over disrespect to constituted authorities, an act contrary to part 3, section 13 of the Kano State Emirate Law 2019.

Meanwhile, Nigerians have taken to social media to express different opinions following the removal of Muhammadu Sanusi II as the Emir of Kano.

Some said the announcement came as a rude shock.

Some Nigerians on social media said Ganduje who was allegedly caught receiving bribes does not have the right to dethrone Sanusi.

Here are some comments on Twitter:@MrVAR “How can someone that was caught in video collecting bribes from contractors be investigating Emir Sanusi Lamido Sanusi for corruption. Nigerians are we thinking straight? Ganduje baida kunya ku kadan wallahi.@Ayobankole “HRH Emir Muhammed Sanusi Lamido Sanusi, the Emir of Kano has been dethroned by the Government of Ganduje. This is a tragedy that should have ended with militarism, a big loss to quality leadership at our traditional levels.”@Sufy2 “I wasn’t shocked Emir Sanusi was dethroned. We knew it will happen, ’cause Ganduje hates him for reasons known to him.”@Yusufdano “Same Ganduje that was caught on camera taking bribe is the same one dethroning an honest and educated King. Nigeria is the ghetto.”@MsLami “It’s cute how Ganduje is flexing his muscles now, immunity will soon expire and he will suffer. That’s for sure@Doublesmalls “Is this even possible?@ Chydee “The same Ganduje whose Dollars-in-Agbada bribe videos went viral really championed the removal of Emir Sanusi for “corruption”. The Comedy Republic of Nigeria.”@Ayemojubar “If not for the pitiful system of government we have, how would Ganduje be a governor in a state where someone like Emir Sanusi of CBN exists?Princes on foot, slaves on horses. Who is Ganduje without political power?@Abdulkabir_SA “Sanusi and Ganduje have succeeded in rubbishing one of the most respected traditional institutions in Nigeria. Sad!@Sodiqtade “Ganduje playing weak politics as usual. Emir Sanusi isn’t just a random leader you can discard like a paper. Using executive power to threaten the distinct throne of Emir is beyond many. Ganduje shouldn’t forget about the dollar video, we are coming back to that after 2023.”@Theofficialfemi “Ganduje removed SLS over corruption allegations. If that’s not the most ironic thing I’ve heard since 1999 then.”@Ferdinandrogers “Ganduje is biting more than he can chew. Why dethrone Emir Sanusi, he is not looking at after government. Except he put a puppet after his tenure, the next governor of Kano state will deal with him. a criminal clown.”@Teemah_writes “Ganduje deserves to be impeached, no like beaten out of that government house! The man doesn’t know the first thing about the limit, or anything at all. Challenging an institution that will outlive him, and his corrupt government? Okay o! Kano is headed for doom, I miss Kwankwaso!@Oluvick009 “Ex Emir of Kano, Lamido Sanusi. We saw it coming but Ganduje is still a governor even after video evidence of him pocketing the money. Wetin Sanusi no go see for Palace!