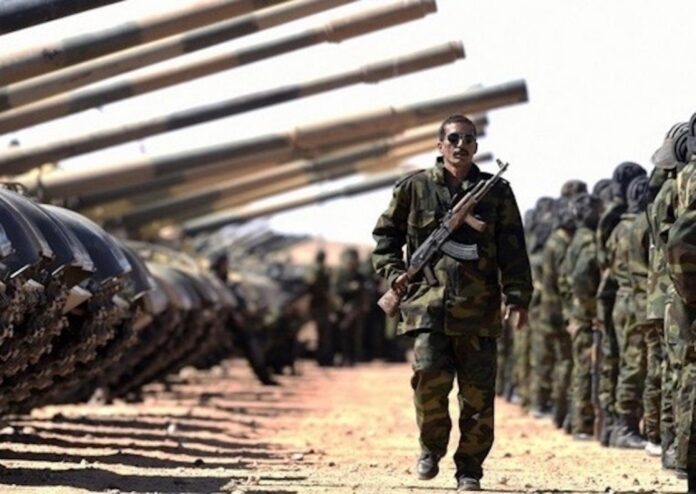 In its Sahara Focus, a monthly intelligence report on the Sahara region, a political risk consultancy, Menas Associates warns that Algeria might trigger a war in the Western Sahara.

‘’Under the current prevailing circumstances in Algeria, the question should not be dismissed quite so lightly’’, Menas Associates insists, pointing out, ‘’several of our Algerian sources believe that the latest incident — which involved the Polisario blockading the strategic ‘West Coast’ road that crosses the Western Sahara buffer zone, or ‘no man’s land’, between Guerguerat and the Mauritanian border — is a deliberate act of provocation by elements within the Algerian regime.

Menas Associates does not share this view, but recognises, for reasons explained in the forthcoming issue of Sahara Focus, that it cannot be dismissed. Those who hold it are basing their suppositions on the fact that the Algerian regime is currently more alienated from its people than at any time since it came to power in 1962.

It may therefore see a conflict with the old enemy of Morocco as a way of galvanising nationalism and bringing the regime and the populace together in common cause. That will never happen because the regime is too hated by the bulk of Algerians.

However — in the same way, that the regime miscalculated the 1 November referendum on the amended Constitution — it is conceivable that there are some in its ranks who have such little understanding of the reality of the country’s political crisis that they might still be clinging to such hopes.

More significantly, the latest events come at a time when Algeria is without leadership. President Abdelmadjid Tebboune is seriously ill with COVID-19 and hospitalised in Berlin, with no constitutionally authorised member of the government to deputise for him. There is confusion about who, if anyone, is currently running the country.

Given the Algerian regime’s long record of fabricating such incidents, it is unsurprising that the events at Guerguerat should raise suspicions that rogue elements within the regime might use this power vacuum to provoke a confrontation with Morocco for their own purposes.

Most spats between the two countries are generally for domestic consumption, or to send a message to the UN, and generally die down within a few weeks.

We would not usually even comment on such usual incidents in Sahara Focus except for the fact that the Guerguerat blockade is not simply a Maghreb matter: it has had an immediate and considerable impact on both Mauritania and countries in the ECOWAS region. Moreover, if serious fighting does break out, which we still think is unlikely, it will have a direct impact on northern Mauritania.

As we write, we are receiving news from Algeria that the country is facing an even more serious crisis.

The first three were all serving very long prison sentences while Hanoune’s sentence had already been substantially reduced.

The official reason for their release is so that they can have a retrial. According to our own sources, however, the real reason is because the current vacuum of political leadership is so serious that General Mediène — the self-styled ‘God of Algeria’ and one of the most hated and feared members of the regime, who, in practically ruled Algeria for most of the Bouteflika era until his demise in 2015 — is needed to help manage the current political crisis.

This latest crisis is being made more urgent by three new developments.

There are strong rumours, which might now appear to be true, that President Tebboune is in a worse medical condition and is reportedly in a coma after possibly having a stroke;

The second is that the Chief of Staff of the Army, General Saïd Chengriha, who is probably the strongest person in the country in President Tebboune’s absence, is rumoured to have been take to France earlier in the day in a serious medical condition.

We emphasise that this has not yet been verified because the regime has drawn a veil of silence over both Tebboune’s and Chengriha’s states of health;

The third element of the developing crisis is the security situation along Algeria’s border with Morocco.

There is no doubt that external sanctions have altered Iran’s trade patterns because it has been forced to address three sanctions-related challenges:

Use new hubs for the indirect imports in order to secure products and services that could not be imported directly.

In the mean time, the current issue of Iran Strategic Focus, a monthly intelligence report on Iran analyses the trade patterns for the first half of the current Iranian year — March 20 to September 21, 2020 — which reveals how Iran is managing the above three challenges.

It also addresses the question of how it has addressed the issue of transacting funds related to its external trade in light of severe banking sanctions.

‘’We reveal that the US withdrawal from the JCPOA in 2018 and the re-introduction of harsh sanctions have compelled Iran’s stakeholders to intensify their efforts on the following strategies:

‘’Build domestic capacities, not necessarily focused on import substitution, but rather on expanding export potential;

‘’Reduce reliance on Western sources of technology by diversifying the countries of origins of imports.  Where this is impossible it has used import hubs such as the UAE, Oman and others to import the necessary items.

‘’Develop payment solutions that do not rely on the international banking system including the oil-for-goods schemes.

‘’The intensification of external sanctions has not forced Iran into international isolation but has led to a re-orientation of the country’s trading patterns.  The EU — which was the country’s top trading partner until 2009 — has lost its significance and the future focus seems to be on China, the regional neighbourhood, and Russia.

‘’It remains to be seen whether a potential revival of the JCPOA will increase Iran’s trade relations with Western countries but the signs are that, even in that scenario, the current focus on the immediate region and eastern powers will continue’’, says Menas Associates.