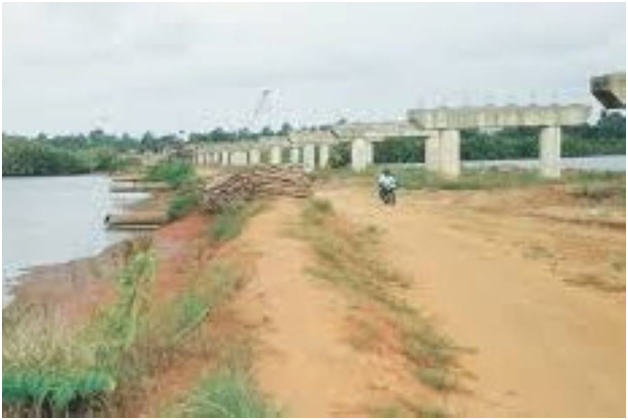 Governor Udom Emmanuel of Akwa Ibom State has renewed his administration’s determination to complete all ongoing roads and other life-touching projects he initiated before leaving the office on May 29, 2023.He says his administration has made funds available to the contractors, pointing out that funds may be in piecemeal due to the obvious challenges presented by the COVID-19 pandemic and some drastic adjustments in the state budget.Though Udom made this known during a special inspection of ongoing road projects and other infrastructure in the state, there are strong indications that his administration is not likely to complete the abandoned 24-kilometre Etebi-Ewang bridge project in Mbo Local Government Area after N19.4 billion has gone down the drains.

The bridge was one of the flagship projects of the Godswill Akpabio administration (2007-2015). Akpabio, the incumbent Niger Delta Affairs Minister, who is locked in massive fraud allegations in the Niger Delta Development Commission (NDDC), awarded the bridge contract at the inception of his administration.As a former Local Government and Chieftaincy Affairs Commissioner under the Victor Attah administration (1999-2007), he heralded the Mbo project with much fanfare.

At the time, he dubbed the bridge as the longest in Nigeria. It was meant to connect oil-bearing riverine communities of Mbo with their Esit Eket neighbours, and open up the area to the vast potentials of the proposed Ibom Deep Seaport and Industrial city.But, 13 years after, the 24-kilometre Etebi-Ewang bridge project is still a pipe dream. Construction work has virtually come to a halt with about 10 of the pillars meant to carry the overlay yet to be done.The giant project has received many variations from the original cost of N5.4billion to a total of N19.4 billion that was paid to the contractor with less than 40 percent of the work done.

Mbo is, however, a coastal area and much of its economic activities revolve around water. The Mbo River runs around many communities in the area and empties into the Atlantic Ocean. While some fishing is done on the river, big-time fishing takes place on the Atlantic Ocean from where species like barracuda, catfish and croaker fish are caught.

It is the highest producer of crayfish in Nigeria, and the second-largest local government area in Oro nation after Okobo in terms of size and population. It boasts of a total landmass of 365 square kilometres and a population of around 300,000. Among its natural resources are clay, gravel and salt deposit.

Four of its communities -Uda, Enwang, Ebughu and Udesi – though bound by the sea, have large farmlands for farming. Effiat, the fifth community, though wholly estuarial and coastal, has, at least, a portion where some form of farming is going on.

Interestingly, when Governor Udom assumed office in 2015, he promised to ensure its completion before the end of his administration. Nothing at the moment seems to suggest that the bridge will be completed before May 2023.Hope is giving way to despair in the area that the project may not be completed before the end of Udom’s administration.While the pillars are yet to be completed and the concrete overlay less than 50 percent done, a construction worker at the sight says work has since stagnated on the project.“This project used to engage about 500 workers but you can see that nobody is even on-site today although work takes place once in a while”, he said, even as he expressed pessimism that the project might not be completed before the end of the present administration with the current pace of work.The traditional ruler and family head of Uko Nteghe, Afi Uda, Chief Effiong Asuquo Efai, had in 2014 said that communities in the area have continued to go through untold hardship as they are only able to move around in the dry season, pointing out that the road is almost impassable during the rainy season.“They keep engaging contractors who will end up abandoning the project. Between 2007 and now, three different contractors have been engaged and they all end up abandoning it without any tangible impact.“When they abandoned the work, the government engaged another one called Bulletin and now Amitec Construction and Development Company is the third and has an equally abandoned site.“The road is so bad and risky. That is why we live a very sad life here. We are pleading with the government to come and complete this job because we are suffering”, Efai had said.

Udom’s Chief of Staff who also supervises the Ministry of Works, Ephraim Inyang-Eyen, says project the inspection became imperative to offer the governor the opportunity to see things for himself since the ease of total lockdown occasioned by the outbreak of COVID-19 pandemic.“Let me use this instance to make some clarifications since I am still the supervising Works Commissioner. Today, we went through local government by local government to see the jobs my boss; Udom Emmanuel has given out, and see the level of their completion.“Apart from a little challenge that may be traced to delay in valuation for compensation to owners of structures in certain areas, with the assurances of the contractors, some parts or entire stretch of the roads I have inspected can be asphalted perhaps in the next one or two months, especially for the fact that drainage and earthwork had been done”, he said.