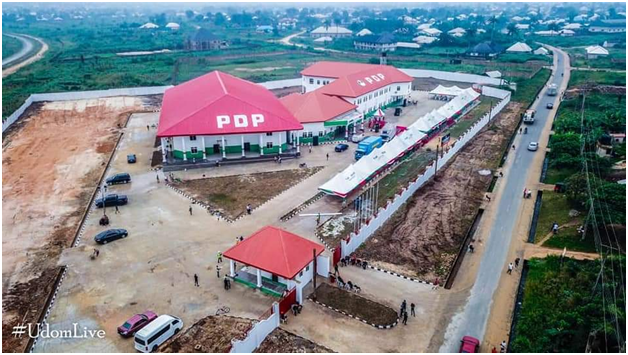 Constitutional and human rights lawyer, Inibehe Effiong, is calling for a forensic audit of Akwa Ibom State finances even as he is alleging that the Peoples Democratic Party (PDP) administration under the watch of Governor Udom Emmanuel has committed criminality against the peoples of the oil state.

The governor said the facility was completed with 100 percent direct labour, pointing out that it would have been unfair if the party did not have a secretariat in a state it has been the only party moving Akwa Ibom forward.

But, Effiong is saying that the party has no single investment in Akwa Ibom, adding that PDP has committed criminality against the peoples of the oil state.

While pointing out what the dilapidated Government Primary School Emereoke in Eastern Obolo Local Government Area looks like presently, he queried, ‘’is this the type of school that will produce future authors, pilots, lawyers, doctors, engineers, sailors, inventors and other professionals?’’

Continuing, the rights lawyer said on his Facebook handle that the dilapidated school mirrors the comatose state of public education in Akwa Ibom, adding, ‘’I have repeatedly challenged anyone to show evidence of one public primary or secondary school located anywhere in Akwa Ibom that is of standard.

‘’No one has taken up the challenge. The reason is that there is none. What politicians have done to Akwa Ibom will take decades to repair. While children of politicians attend the best private schools within and outside the country, children of the less privileged are denied qualitative education.

‘’The trillions of naira that accrued to the state between 2007 to date cannot be accounted for. Most of the funds have been stolen. While public schools in Akwa Ibom remain in a state of disrepair, the government is dissipating billions of naira on frivolous white elephant projects.’’

He also pointed at the sorry state of Community Secondary Grammar School, Ikot Essien Ibesikpo, claiming that the disgusting state of the school mirrors how corrupt politicians in Akwa Ibom underdeveloped ‘’one of the richest states in Africa’s most populous nation.”

Insisting, Effiong said, ‘’we need a forensic audit of Akwa Ibom finances. Is the new PDP secretariat in the state a government project? How and why did Governor Emmanuel get involved in the construction to the point of appointing a public officer, Enobong Uwah, as the project supervisor?

‘’Can Uwah explain to the public the source of the funds used in constructing the new PDP secretariat? What is the nexus between your position as the Chairman of Uyo Capital City Development Authority (UCCDA) and supervision of the construction of the secretariat of a political party?

‘’I keep wondering what gives you people the effrontery to assume that Akwa Ibom resources belongs to the PDP. It is shameful that instead of asking relevant questions, people are busy congratulating you for delivering the new Akwa Ibom PDP Secretariat.

‘’How does the new PDP secretariat glorify God? This is blasphemy. God has no business with the corruption and criminality that the PDP has perpetuated in Akwa Ibom. This nonsense will stop one day, no matter how long it takes.’’

Not done yet, the rights lawyer queried further, ‘’can someone explain why Governor Emmanuel has outsourced payment of salary to consultants? What then is the responsibility of the Accountant General, Head of Civil Service and other government departments and officials who are supposed to ensure payment of salary to civil servants?

‘’The Akwa Ibom State Government should explain why a private entity is exercising the functions of the government. How much is the consultant earning? How was the consultant hired? Did it follow due process?

‘’Most of us only focus on the evils and corruption in Abuja, whereas the corruption that is going on at the state level is worse. Governors are operating like demi-gods and sole administrators.’’