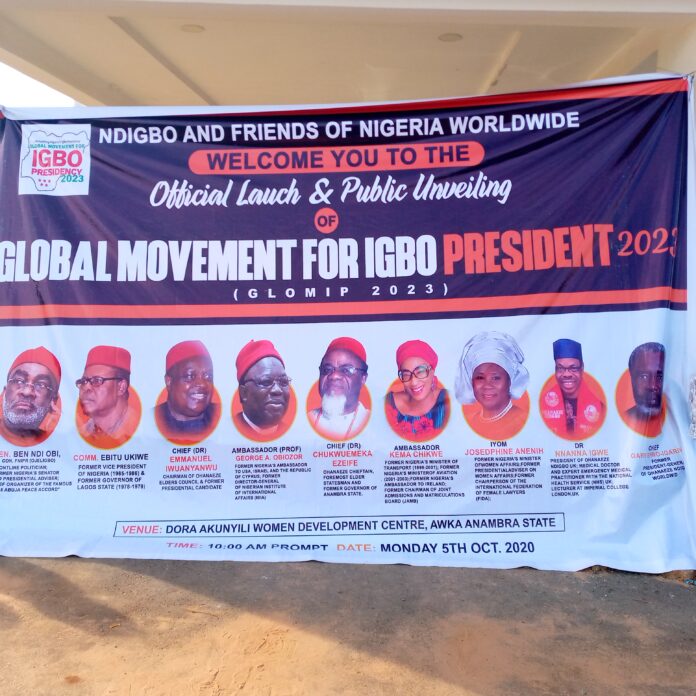 The need for a Nigeria to produce a President of Igbo ancestry come 2023, formed the crux of discussions at an event on Monday in Awka, to mark the official launch and public unveiling of the Global Movement for Igbo President 2023.
The event held at Dora Akunyili Women Development Centre, Awka, tagged  “Actualising Nigeria’s Igbo Presidency: The way forward”, attracted notable Igbo politicians, scholars and associates.
Among them were a former Presidential Adviser on Inter Party Affairs, Senator Ben Obi, former Governor of Anambra state, Dr. Chukwuemeka Ezeife, former Nigeria’s Ambassador to Ireland, Amb Kema Chikwe,  former Minister of Women Affairs, Josephine Aneni, President Ohaneze Ndigbo UK, Dr Nnanna Igwe, among others.
The Chairman on the occasion, Senator Ndi Obi said for equity and fairness, political parties in the country especially the PDP and the APC, should zone their Presidential ticket to the Southeast.
He, however, noted that in their best interest, Ndigbo should commence the move to garner the necessary support that will ensure the realization of the noble objective early enough through negotiations and lobbying with other regions in Nigeria.
“It has been 54 years ago, since an Igbo man ruled Nigeria, during Aguiyi Ironsi’s regime that lasted for just 194 days. This has raised a lot of questions as to the place of the Igboman in Nigeria’s democracy. I am sincerely of the opinion that this country must heed the clamour by various interest groups and work together to ensure that an Igboman emerges the President come 2023 in the interest of equity and fairness,” he said.
Obi also harped on the need for Igbo politicians to begin to reach out early enough, if the dream must come true.
“Ndigbo cannot elect President all alone, rather, they should intensify lobbying of the North West, North East, North Central, South West and South-South.
“After reaching out to other zones, the next hurdle would be the political parties that have the constitutional right to sponsor people for elections,” Obi maintained.
For former Anambra Governor, Dr Ezeife, Igbo people must start believing in the cause of Igbo President come 2023, as it appears other Nigerians are more confident in the movement.
According to him, the agitation for self-determination and independent state was fueled by the lack of sense of belonging to Ndigbo, and securing Igbo presidency will help quell the agitation.
“It is very important to mobilize our people to be on the same page and speak with one voice on the sole project rather than having different demands and agitations outside the call for an Igbo President.
“While we cannot blame our brothers who have taken to the struggle for an independent state of Biafra, I am of the strong view that if our people had received a fair treatment in the Nigerian nation, they may not have started this struggle.
“But as a result of this, we now have more people from outside South East supporting Igbo Presidency even more than the Igbos, simply because there is no confidence in the system. We must have a strong body of elder statesmen to go to people of influence to lobby,” he advocated.
In their separate remarks, the President Ohaneze Ndigbo UK, Dr Igwe, former Minister, Anenih and the National Chairman of National Conscience Party, Dr Tanko Yunusa, lent their voices in calling for a better approach towards the struggle for Igbo President come 2023.
In their opinions, Igbo presidency holds the answer to Nigeria’s many teething sociopolitical and economic woes.
They also believe secession will not do people of the race much good.
The Convener of the event, Comrade Kennedy Iyere said the quest for President of Igbo extraction would be a global project which will be presented to the British and European Union parliaments as well as other government agencies in the world.
Iyere who is also the President, Youths Off The Street Initiative (YOTSI), noted that the diversity in Nigeria’s ethnic groups makes the nation beautiful but said for the benefits to be derived, all the groups must be given a fair share in governance.
“There is no doubt as to whether the Igboman has the capacity to lead Nigeria but somehow, Igbos are the cause of their political marginalization.
“The smartest people in Nigeria are from the southeast in the area of business. Just few years after the Nigerian Civil war that ravaged the region, the Igboman has been able to bounce back economically. They have this infectious creativity that can boom a desert but have we asked why when it comes to politics, the wisdom of the igboman comes to zero? With their acumen and sense, the Igbo should have ruled this country for the better number of years but the reverse is the case. That’s why we even as non- Southeasterners, are championing this project,” Iyere said.
He further said that having seen the best of other ethnic groups in terms of leadership, it has become imperative to tap into the ingenuity of the Igbos to find lasting solution to the country’s numerous woes.
“We must disabuse our minds from secession as it will cause more problems for us. This is time to build and part of that building is by ensuring that an Igbo man emerges the president of this country come 2023. Remember, I am not looking for an Igbo president but a President of Igbo ancestry. When we must have secured the zoning, we will get down to the business of selecting credible candidates and this project will be done in a way that whoever eventually emerges, will not have to depend on his personal resources to prosecute his campaigns so that he does not take us back to the era of godfatherism.
“We shall raise funds and for once, enthrone a responsive leadership that will yield the kind of governance our people yearns for. That is our vision,” Iyere concluded.