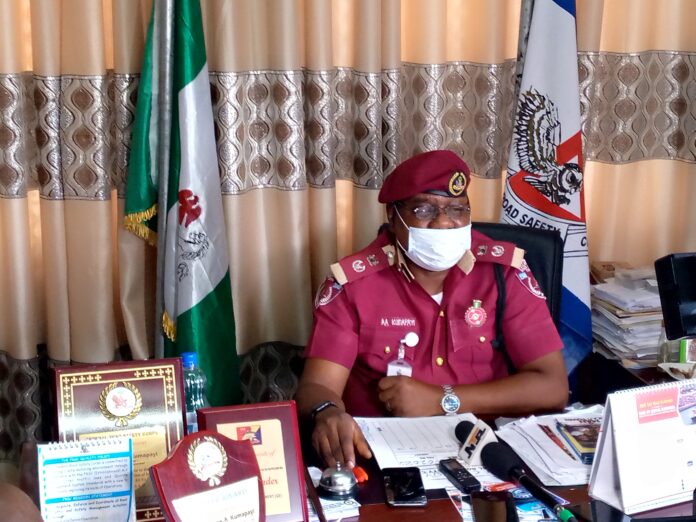 The Federal Road Safety Corps says it will carry out robust traffic management and control activities at places with heavy vehicular movements to ease traffic across parts of Anambra State this Christmas season.
The State Sector Commander of the FRSC, Andrew Kumapayi disclosed this in an exclusive interview with TNC correspondent in Awka on their Ember Months preparations.
Parts of Anambra State such as Bridgehead, Upper Iweka area, Owerri Road axis all in Onitsha, as well as other cities like Ekwulobia, Awka and Nnewi, are known for heavy gridlock during festive periods.
This is largely as a result of an influx of citizens of the state who are resident out the state as well as the position of Anambra, as the gateway into the Southeast region.
Kumapayi disclosed that the robust traffic management and control activities is to help ensure that holidaymakers and road users do not experience long hours of traffic gridlock.
He also revealed that two camps will be established for 24-hour traffic control operation and immediate response to road traffic crashes in the state.
“Headquarters approved one camp for us at Onitsha but because we know our environment here and the traffic we usually experience here during the yuletide celebration, we decided to open a second one at Nteje. We hope to have our personnel there to offer services to road users day and night. This initiative also became necessary because we realized that our people continue to travel at night and we can’t attend to them the way we should, if we continue to run only day operations,” Kumapayi said.
The Anambra FRSC Boss said a major focus during the command’s Ember Months Operation will be to respond promptly to emergency situations on the roads such as road traffic crashes and removal of obstructions.
“We are partnering the Anambra State Ministry of Health to be able to provide ambulances for the evacuation of injured persons during this season. What they will be providing is to augument what we have on ground. The objective is to respond immediately there is a situation on the roads,” he said.
Kumapayi revealed that the command is working hard to realize the Corp’s target of reducing road traffic crashes by 15 percent and fatality by 20 percent through various internal measures.
One of these measures, he noted, is the quarterly roads update it provides to government where it identifies very deplorable roads that constitute death traps for motorists, expressing happiness that such efforts are yielding results, as work has commenced on most Federal Roads in the state.