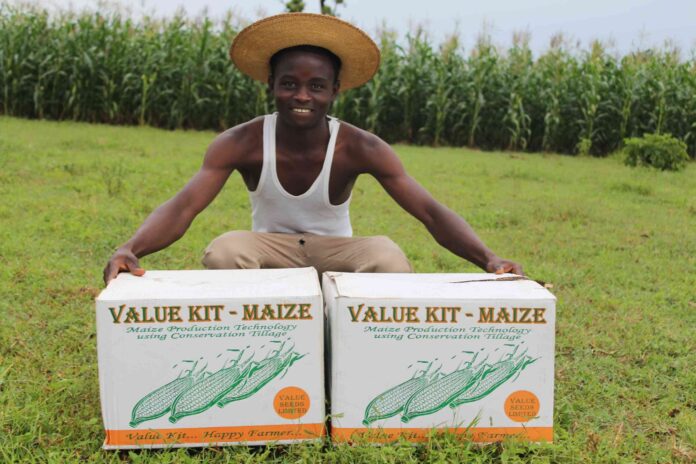 Value Seeds has created value kits, a small pack that has all the ingredients a farmer requires to cultivate a quarter of land.

“These two technologies brought together all the inputs that the farmer needs – the seeds, the fertilizer, and the crop protection products (CPP), agrochemicals, pesticides in order to prevent yield loss. The box has everything”, says Managing Director of Value Seeds, George Zangir.

With a vision to meet the production needs of farmers, Zangir founded Value Seeds in 2009 to multiply seeds by researching different ways to improve varieties and distribute to small holder farmers.

At the time, Nigeria was not particularly focused on small and medium sized enterprises (SMEs), and as such, the company found it difficult to secure adequate funding and access to improved practices.

But interestingly, unknown to the Value Seeds founder, representatives from the Alliance for a Green Revolution in Africa (AGRA) were meeting with some of their grantees to review the work of Agro dealers and seed varieties around Kura-a town close to Kano in northern Nigeria. It was at that moment and the work of Value Seeds immediately caught their attention.

AGRA reached out to Value Seeds, and following a successful discussion with the Vice President and Seed Production Manager, they were asked to send a proposal. This marked was beginning of a new journey for the seed company.

In 2014, after the completion of various training activities, Value Seeds was awarded a grant of $179,000 to help small-holder farmers access seeds, improve varieties and make sure they have access to top quality inputs.

“We were to focus on producing maize, rice, soybean, cowpea. And the focus areas were two local government areas in Kaduna state and Niger state”, says Zangir.

With the grant from AGRA, Value Seeds worked closer with smallholder farmers and were able to understand them better.

According to Zangir, he realised within a very short time that the challenges for most farmers aren’t limited to access to the inputs or extension, it is the lack of supervision and guidance throughout the process of production.

In order to ensure that the farmers are guided through the use of the kit, extension agents are also stationed to help the farmers use the box. The value kit is an added technology rooted in conservation agriculture, which reduces inputs costs and guarantees a dramatic increase on yield.

The grant also created an avenue for the company to provide some of these kits on credit. “They take the box and then at harvest, they pay us with their produce. Now, that became valuable to both of us, a win-win for both parties.”

According to Zangir, AGRA not only made the company better in terms of processes capacity building, it changed the lives of many. With the grant, Value Seeds was able to produce 2000 tons every year, between 2014 and 2016.

“We also produced kiosks and distributed across the two states (about 300 kiosks beating a target of 250”, he adds.

Value Seeds trained more than 20,000 out growers across the two states, and a lot of them were now able to produce good seeds and good grains. The seed varieties produced have improved and more farmers are now willing to spend some money to buy fresh seeds and plant.

“Before AGRA our processes were quite rudimentary; we were not as refined as today,” said Mr Zangir. “Every department —seed market, seed production, quality control, all had someone trained by AGRA in Ghana and Kenya.”

In three years, Value Seeds has moved from being a start up to one of the best two seed companies in Nigeria.