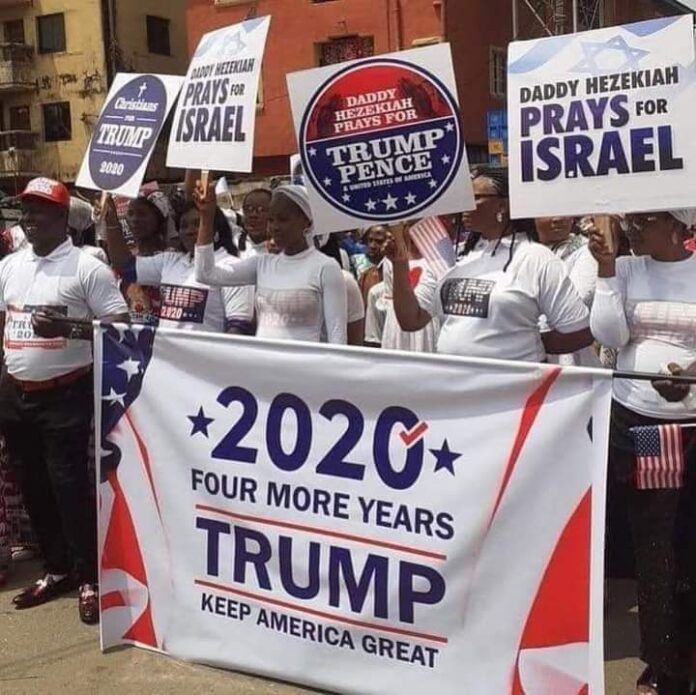 Ahead of the November 3rd Presidential Election in the United States of America, the Living Christ Mission Incorporated has organised a solidarity Prayer March in endorsement of the reelection bid of US President Donald Trump.

The church members moved through major streets of Onitsha in Anambra state with different banners campaigning for Trump to be re-elected for a 2nd term in office.

The inscriptions visible on their banner expressed their strong belief that Trump would continue to revive America’s economy, introduce sound moral values, restore the sanctity of human lives by standing against the practice of same-sex marriages and abortion as well as encourage freedom of worship among others.

Leading his members to the prayer rally at the Living Christ Mission headquarters Inland Town Onitsha, the founder and leader of the church, Most Rev Prof Daddy Hezekiah said the march was to show solidarity with the US President in view of the persecutions he is facing ahead of the election.

Hezekiah who spoke on the numerous achievements of the US President, harped the need for the church to rally round him since he had remained strong in defence of Christianity in the US and across the globe.

“ Trump in his first term in office, worked towards strengthening diplomatic ties between the US and the Jewish nation of Israel to the point of recognizing Jerusalem as the Jewish capital which successive administrations of W. Bush and Barack Obama failed to do even when US Congress had passed a resolution to that effect since 1995. The persecution Trump is facing in the United States is as a result of his fervent desire and commitment to doing the right things irrespective of what the majority of the people are doing. Unfortunately, many people have hated him even without cause, but we want to tell him that God is with him and we are seriously mobilizing all men of goodwill to support him,” the prelate said.

Prof Hezekiah recalled that Trump had warned President Muhammadu Buhari against the way Christians were killed in Nigeria and convinced the United Arab Emirate, Bahrain and other Arab nations to be in good terms with Israel, showing that he is good in negotiations.

The Chairman, National Planning Committee of the church for the event, Prof Obiekwe Nwanolue observed that the Living Christ Mission is the only church that is organizing the prayer march for Donald Trump, who he said has bounced back to salvage the great nation of America despite all odds.

“Trump has come to make sure that America is delivered, to ensure that morality defeats immorality and that is why we are supporting him. The victory of Trump is not in the interest of Christians alone but for all Americans. America is a great nation and needs great men like Donald Trump to superintend over its affairs,” he posited. 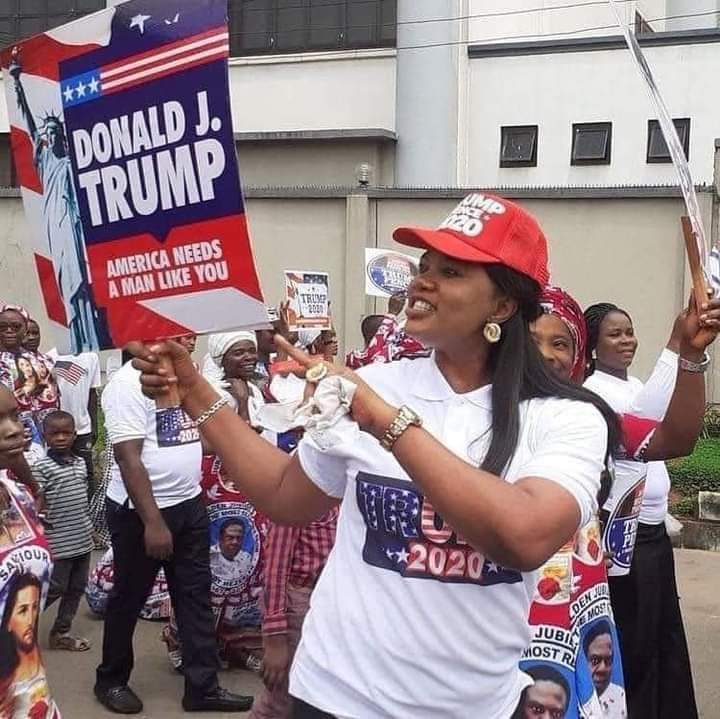 Other members of the church including the Head Department of Biology, Nwafor Orizu College of Education Nsugbe, Dr (Mrs) Jane Achufusi, a Director in the Rivers State Ministry of Health, Dr Emma Wornu, a business mogul and Peace Ambassador, Dr Hezekiah Duru, the former Vice-Chancellor of Hezekiah University, Professor Enoch Ajunwa and a Lecturer with the Department of English, University of Port Harcourt, Dr Eze Ibekwe re-echoed the reason behind the epoch-making event and appealed to American electorates to cast their votes for President Trump, stressing that Trump presidency signifies good things for America.