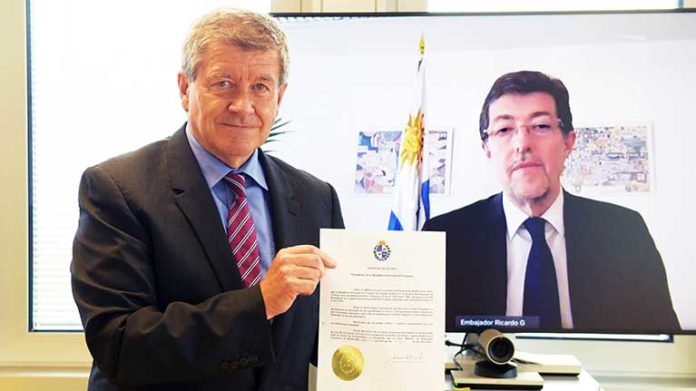 Uruguay’s Ambassador and Permanent Representative to the United Nations in Geneva, Ricardo González Arenas, deposited the instrument of ratification with ILO Director-General, Guy Ryder, in a virtual ceremony.

With only two ratifications needed for Convention No. 190 to enter into force, this first ratification represents an important step in the process.

The envoy says “Uruguay considers that the cross-cutting nature of Convention No.190 makes it a very useful tool to improve the legal and labour relations framework already existing in the country.

“These instruments correlate with the challenges of the future of work, which are linked to workers’ increased mobility, the diversification of employment contracts and the impact of new information and communication technologies in labour relations.

‘’Adapting to the most modern dynamics of our societies, where factors such as competitiveness, innovation, lifelong learning and efficacy have an unquestionable relevance, requires additional instruments to ensure that workers are protected and their rights respected.”

Convention No. 190 is the first international treaty to address violence and harassment in the world of work.

Together with Recommendation No. 206, it provides a common framework for action and a unique opportunity to shape a future of work based on dignity and respect, and underlines the right of everyone to a world free from violence and harassment.

It includes the first international definition of violence and harassment in the world of work, including gender-based violence.

The Convention applies to the public and private sectors, formal and informal economies, and urban and rural areas. It protects everyone in the world of work, irrespective of their contractual status.

The Convention also requires ratifying member states to adopt, in consultation with representative employers’ and workers’ organisations, an inclusive, integrated and gender-responsive approach to preventing and eliminating violence and harassment, through prevention, protection and enforcement measures and remedies, as well as guidance, training and awareness-raising.

It also recognizes the different and complementary roles and functions of governments, employers and workers and their respective organizations, taking into account the varying nature and extent of their responsibilities.

The Convention and Recommendation also reaffirm ILO’s crucial standard-setting role. They are tangible evidence of the enduring value and strength of the social dialogue and tripartism, which will be essential in implementing them at the national level.

Arenas referred to “Uruguay’s long-lasting tradition and a strong commitment to the multilateral system and, particularly, to the ILO”. He described the ILO as a normative tripartite organization that helps countries improve their citizens’ living conditions and achieve balanced industrial relations where the interests of all social partners are duly protected.

“For all these reasons, the national parliament approved the instrument on 17 December 2019 and, bypassing Law 19.849, and depositing the instrument of ratification, Uruguay has become the first country to ratify this Convention”, he said.

ILO’s big boss, Ryder, thanked the Uruguayan President, Luis Lacalle Pou, for his country’s ratification. “The framework provided by Convention No. 190 is, more than ever, of utmost importance during the current COVID-19 pandemic, since many forms of work-related violence and harassment have been reported across countries since the outbreak began”, Ryder said.

“Convention No. 190 has a crucial role in shaping a human-centred response and recovery that tackles injustice and supports the building of a better normal, free from violence and harassment. The ratification also reflects Uruguay’s longstanding commitment to the ILO’s mission, as well as its intention to make clear that violence and harassment in the world of work will not be tolerated. It is hoped that other countries will follow suit.”

Uruguay was also the first ILO member State to ratify the Domestic Workers Convention, 2011 (No. 189), which was the last ILO Convention to be adopted, prior to Convention No. 190.