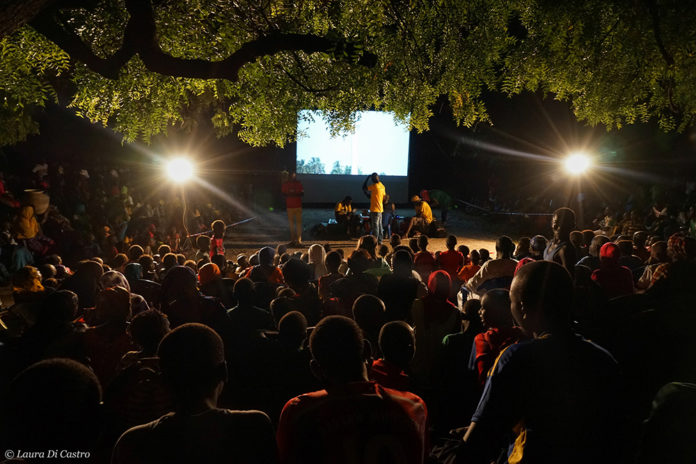 The International Organisation for Migration (IOM), an agency of the United Nations has launched its mobile cinema caravan CinemArena which will tour across West Africa for five months highlighting the risks of irregular migration.

The caravan has started its regional tour in Tambacounda, Southern Senegal, one of the main source regions for irregular migration. It aims to inform Senegalese youth about the risks of irregular migration by bringing outdoor cinema events to more than 25 villages, reaching at least 8,000 people through December 22.

The activities include screenings of awareness-raising films on irregular migration, followed by workshops, Q&A sessions, theatre performances and other activities.

“Returned migrants, local partners and artists have been working closely with IOM for a month to bring people together around cinema,” said Laurence Hart, Director of the IOM coordination office for the Mediterranean.

“Some of the migrants who arrived in Italy told us they left without being fully aware of the difficulties of the journey and the violence they would be subjected to.”

While Senegal is a key transit country for many West Africans traveling to Europe, it is also a sending country. In recent years, almost 20,000 Senegalese migrants reached Italy by sea (over 10,000 in 2016 and 6,000 in 2017) in search of better economic opportunities.

In 2018, the route from West Africa to Spain became the most frequently used route into Europe: Senegal was ranked fifth in the total number of West African arrivals after Guinea, Mali, Côte d’Ivoire and The Gambia.

“I saved 500,000 FCFA ($1,000) to leave but after tonight, I’m so scared that I am going to tell everyone in my family what is happening outside of Senegal,” said Khady, after the debate organized the first evening.

Getting clear, reliable information out to remote areas is a challenge, said Mia Barrett, Head of IOM’s Awareness Raising Unit at IOM Regional Office for West and Central Africa.

“Some of the key migration-prone areas in West Africa are so remote that information on the risks of irregular migration don’t reach those that need it most,” Barrett said.

“Through movies, people can emotionally connect to the experiences of others – whether it be happiness or sadness. Community screenings are an effective way to bring important messages to rural areas.”

After its stops in Senegal, CinemArena will travel onwards across Côte d’Ivoire and Guinea.

The campaign is creating synergies with IOM’s Global Migration Film Festival and with other grassroots awareness-raising initiatives implemented in West Africa. Last year, the caravan visited five countries, reaching over 75,000 participants during 135 events.

This caravan is organized in the framework of the CinemArena project – the mobile cinema initiative launched in 2002 by the Italian Ministry of Foreign Affairs and International Cooperation (MAECI) and the Italian Agency for Development Cooperation (AICS) and funded by the MAECI’s Africa Fund. It is implemented in partnership with Italy’s Ministry of Interior and IOM.