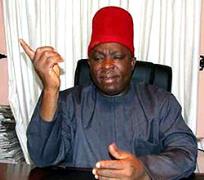 Distinguished Senator Victor Umeh, a consummate politician and estate surveyor, believed to be a force to reckon with in the political firmament of Anambra State and Nigeria is 58.

Born on July 19, 1962, Umeh, a man of indefatigable endeavour, joined politics in 1998 as a member of the Peoples Democratic Party (PDP). He teamed up with other eminent Nigerians to form the All Progressives Grand Alliance (APGA) in 2002. Highly respected for his doggedness and tenacity of purpose, the political juggernaut came to limelight on Nigeria’s political sphere in 2004, when he became the national chairman of APGA.

Described as a great patriot, statesman and staunch advocate of the rule of law by his admirers, Umeh mounted the APGA chairmanship seat with a vision, mission and agenda to turn around the fortunes of the party and reposition it for greater performance in electoral contests. He worked round the clock to actualize his plans for APGA despite the protracted leadership tussle that followed his emergence as the party helmsman. He fought doughtily and resolutely in court, winning several cases to remain APGA’s national chairman. He successfully tackled those who wanted to destabilize the party and render it ineffectual and irrelevant in Nigerian politics.

The suspension and later expulsion of the pioneer national chairman of APGA, Chekwas Okorie, paved the way for Umeh’s leadership. Okorie had challenged his removal with about 23 lawsuits for over six years between 2005 and 2011 when the Apex Court finally settled the matter in favour of the Ohamadike Ndigbo. In 2013, another group rose against Umeh and elected Chief Maxi Okwu to replace him even when his tenure was yet to expire. About 20 different court cases were instituted by the Okwu faction across the country. At the end, Umeh triumphed! He completed his tenure in 2015 and handed over a vibrantly functional APGA to his successor.

As Brian Tracy, a Canadian-American motivational public speaker and self-development author aptly puts it, “The true test of leadership is how well you function in a crisis.” While he held sway as APGA national chairman, Umeh never allowed the prolonged crisis in the party to distract him or make him lose focus. In the midst of the crisis, he had several electoral and political victories for the party. Even after leaving office as APGA boss, Umeh, a political strategist has remained a great pillar of the party. He is always seen in the forefront championing the cause of the party and advancing its ideology for a better Nigeria. No doubt, APGA would be proud to have him as a consistent member who has made various sacrifices to keep the party alive and afloat.

As a representative of the people of Anambra Central Senatorial District in the Senate, the ex-APGA chief showed exemplary leadership. He observably justified the confidence reposed in him by the people. Notwithstanding the fact that he spent only 17 months in the Red Chamber, Ohamadike left an indelible mark for which he would be remembered. He was the Vice-Chairman Senate Committee on Employment, Labour and Productivity; member Committee on Finance; Petroleum Resources (Upstream); Trade and Investment; Culture and Tourism; Environment; Land and Housing.

In his strong determination to positively affect the lives of the masses, Umeh sponsored manifold motions and bills that have a direct bearing on the ordinary citizens. He made superb contributions to issues of national importance, canvassed for the best approach to governance, espoused the causes of justice and freedom for all and developed interest in anything that will bring forth true dividends of democracy to the Nigerian people. At the home front, he used his influence in the Senate to attract numerous developmental projects and empowerment programmes to his constituency. In the opinion of his allies, an x-ray of his 17-month sojourn in the Senate would reveal that he remains the best Senator Anambra Central has ever had since the current democratic dispensation came into being in 1999.

At 58, considering his record of achievements in his personal, professional and political life, coupled with his selfless service to humanity, one would not be out of place to say that Umeh has lived a fulfilled life. Today, his fans and loyalists are all over the place celebrating him because of their total conviction that he has indeed lived a life worthy of emulation.

One of his loyalists, Charles Ifeanyi Obi, sees Umeh as “A dedicated family man whose family life is enviable.” According to him, “The great Jagaban of Shinkafi Emirate led the All Progressive Grand Alliance (APGA) party through lots of struggles as its National Chairman and established it as the third most viable and attractive political party in Nigeria. Consequent upon his copacetic cum laudable performance both as a professional and as outstanding politician, many communities in different parts of the country have honoured him with honorary chieftaincy title awards some of which includes Ikemba Aguluzigbo, by the people of Aguluzigbo his hometown; Ohamadike na Agulu by the people of Agulu town and Ibobo Aguleri by the people of Aguleri town to mention but a few. He has also bagged numerous academic and non-academic awards including the National Assembly Award of Senator with Best Motion of the Year 2018.

“Apart from his acts of charity which he does boundlessly extending even outside the shores of this country, Ohamadike Ndigbo is delighted grooming the young ones, having them inspired by his exemplary life thus, many of us are inclined to him and obviously learning lots from his exuberant experiences.

“Our Quintessential Leader, The Ikemba Of Our Time; a man so proud of the Igbo identity that he chooses to always be identified in colourful Igbo regalia, we the members of Team Ohamadike, your fans, supporters and political allies are celebrating with you on this day of your 58th 6birthday; praying God to grant you many more years in good health, more elevations and peace of mind and body.”

In a piece, Dr. Ikenna Chukwuka, a public affairs analyst, described the former Anambra Central senator as a grassroots politician, saying: “Ohamadike is a gift to Anambra Central in particular and the nation in general. He participated in the 2014 national conference where he highlighted the plights of Ndigbo and persuaded fellow delegates to address them. A bridge-builder, his handshake across the Niger was a tunic that changed the narrative in that crucial conference with the South East extracting substantial promises from delegates that would have fully reintegrated Ndigbo in Nigeria after the civil war. Unfortunately, the present administration jettisoned the report of this pivotal national dialogue that would have restored Nigeria to greatness as the giant of Africa.

“An ardent follower of the great Ikemba Nnewi, Eze Igbo Gburugburu and APGA National Leader, the late Dim Chukwuemeka Odumegwu-Ojukwu, whose courage and political philosophy were springboards in Umeh’s pursuit for Igbo total emancipation, national reintegration, unity, equity and prosperity of all Nigerians. A mission, like his mentor, he is willing to lay down his life to achieve in the quest for a strong, virile, progressive, egalitarian and decent democratic society.”