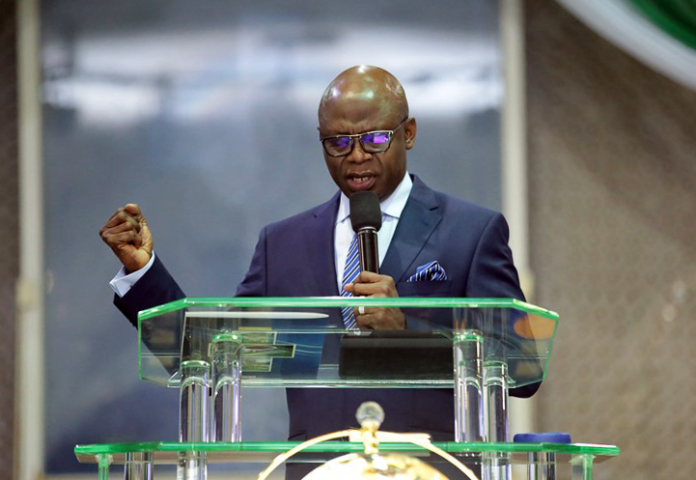 The serving overseer of Citadel Global Community Church, Pastor Tunde Bakare, has lambasted Yoruba leaders who are not comfortable with the National Leader of the All Progressives Congress (APC), Asiwaju Tinubu becoming Nigeria President.

According to the cleric, God does not need anyone’s permission to put the former Lagos State Governor in a hall of fame.

Bakare stated this while addressing his congregation at his Lagos church, on the topic, ‘An Idle Man’s Brain Is The Devil’s Workshop.’

Bakare said that those who have scores to settle about Tinubu’s rise should “carry their stone.”

“I have a word for some Yoruba people whose stock in trade is nothing but a rancorous noise characterised by bitterness and resentment about the ancestry of the former two-term governor of Lagos State, Asiwaju Bola Ahmed Tinubu.

“Carry your stone. I have a word for those Yoruba rancorous elements, noisemakers who have not achieved much as Asiwaju Tinubu has achieved, but are always querying and worrying themselves about his ancestry,” he said.

The preacher added that those who are envious of Mr Tinubu and those who desire to take his power slot should “stop their useless talk about him, and busy themselves with what can add value to society.”

The clergyman, who has never hidden his aspiration to become president, said in clear terms that he will succeed Buhari come 2023.

However, a former Chief Whip of the Nigerian Senate, Senator Roland Owie, has advised the National Leader of the All Progressive Congress (APC), not to contest for the presidency in 2023.

According to him, it would be the turn of the South-East to produce the next president of Nigeria.

Owie stated this while speaking on the emergence of a group, Justice and Peace Forum in Nigeria (JPFN), which would be launched early in 2021.

He noted that the North still has about four years after 2023 to catch up with the South since the rotation of the presidency started in 1999.

“The southern part of Nigeria has taken 14 years plus. So when Buhari finishes in 2023, even though it is a thorny regime, the north still has four years.

“If Tinubu knows that Nigeria has peace with this zoning, if he knows that do unto others as you will want them do unto you, he should not think of the presidency.

“If all the major political parties agree that it should come to the south, the south-west is out of it, they have completed their eight years,” Owie said.