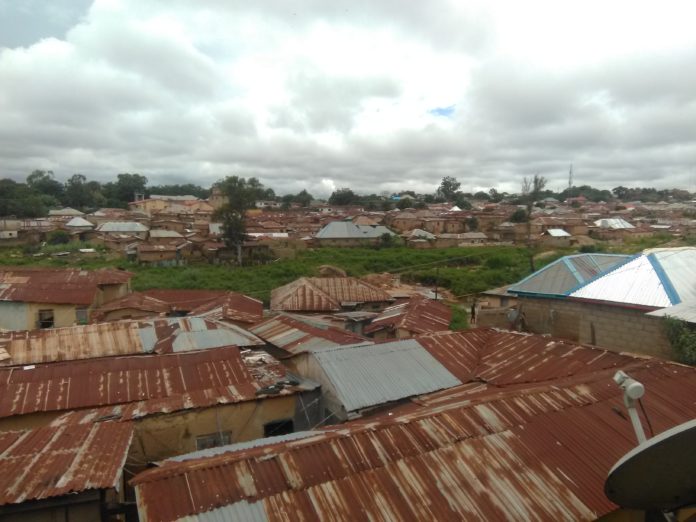 The three phenomena of poverty, crime, and life, are what stare you directly when you make your way into Kabong, a densely populated neighborhood in Jos North, Plateau State.

Kabong is coming under Jos West Constituency and is situated along Zaria road or the Goodluck Jonathan way. It shares boundary and separated by a river, with Jenta Adamu- another lively but equally congested neighborhood. Yet, the busy highway separates it from Gada-Biyu, a vastly populated and boisterous area too.

Kabong is a Berom word and it translates to a place where the Berom first settled, according to Senior Ward Head, Nyam Maurice. It used to be very filthy, unmotorable and unsuitable for decent habitation since Jos existed as a city and capital. But the giant infrastructural strides undertaken by Gov. David Jang, gave it a facelift, with the construction of a network of roads. Despite this transformation, nothing much has changed as far as the standard of living, security and decent livelihood of the people is concerned.

The area is a residential and commercial area, characterized by mostly shanties. Beer parlors, taverns, shops, food canteens and hawkers of assorted goods, throng the entire stretch of the street. At the entrance are commercial motorcycles waiting and competing for the next available passenger to ferry into the neighborhood.

The congestion and high population make a stranger to the area unable to differentiate between a commercial apartment and a residential apartment. They are so intermixed with scarce spaces for people to move freely. The road is so congested with human and vehicular traffic that makes one quite uncomfortable.

Kabong is a classic example of poverty and deprivation as has always been imagined by Nigerians at home and abroad. Most beer parlors that intersperse one another are without decent toilets. Therefore, it is normal to see customers, who are pressed after a deluge of beer, easing themselves openly on a free space within the vicinity, not minding who is watching or the time of the day. Due to the lack of space, people usually match on urine and the stench that oozes around is so strong and disgusting.

Yet, in the mix, you have women who deal in edibles like noodles, pepper soup, and assorted meat, without minding the hygienic condition. Business goes on as usual and the beer sellers and customers to are not disturbed by the filth and discomfort. You can only feel the discomfort if you are a newcomer.

This reporter tried to find out from certain customers their views about the filthy practice around and the reaction from some of them only showed they were already accustomed to the condition around. A half-drunk couple only laughed off my curiosity, “I don’t feel any smell”, the man quipped. You dare not even think of getting a place to poopoo because there is none!

Kabong is a metaphor for Fela’s favourite theme: “suffering and smiling” because, in spite of the poor standard of living, Kabong is very lively, boisterous, and business-like from the break of dawn to the late hours of the night.

Apart from the nuisance of open urination by customers, it is no secret that a greater percentage of the residents, whose premises are used for business, don’t have toilet facilities or do they have a water supply. During the rainy season, they depend on wells and rainwater, while in the dry season; they depend on the river that passes through as well as water vendors. They use the river water for washing of clothes, but many could have gone their way to use the water for other sensitive domestic uses which are quite unhygienic.

Apart from poverty and lack, another phenomenon which is a major cause for concern in this area is a crime. The type of crime is mostly perpetrated by the youth and might have been propped up by the level of poverty and unemployment there. The riverside and ‘under bridge’ are a harbinger of drug peddlers and users. Drugs such as cannabis and assorted psychotropic drugs are being sold there. Of recent, there have been rising cases of cult and gang clashes in the area with occasional loss of lives. Also, members of the community have often complained of extortion at gunpoint by these miscreants who would do anything to get money to satisfy their craving and avoid the “Jones”.

A member of the community, Acson Inuwa, told this reporter that a gang once attempted to extort him of his phone, but when they recognized that he was a familiar face, they backed off and apologized instantly. But any other person may not be spared on such occasion.

As a result of several complaints by troubled residents, a detachment of special forces of the army once raided the area and arrested so many of those drug dealers. Security agencies also made it a routine operation to rid the place of hoodlums and miscreants. But that also hasn’t solved the problem entirely as gunshots; gang fight and extortion still exist in Kabong. According to the Senior Ward Head, Nyam Maurice, the community is working towards nipping the menace in the bud.

“We are working towards it and it is not something I can reveal to you now”, he disclosed. He added saying the increase in crime is due to the influx of people from other parts of the city who have found Kabong a safe haven.

However, on the flip side of the negative story about Kabong, is that of hospitality that is unmatched at least at that level. Kabong is inhabited by both natives and non-natives of Plateau State and all these tribes co-exist and do business with one another like a family. What matters in Kabong is “hustling” to survive, and not where you belong, says Nyam Maurice, the Senior Ward Head. He attributed the uniqueness of Kabong to the fact that the residents are not lazy and prioritize their survival over petty sentiments like ethnicity or religion.

“Hustling contributes to it because nobody sits idle. When you are looking for your own, you don’t care about anybody”, he stated. True to his words, when one visits the local liquor joints, one would notice friendship, brotherhood, and sisterhood that exist among people of different tribes. Even though the Irigwe tribe is having issues with the Kitche tribe at home, that rift is hardly felt among the milieux in Kabong. That’s the uniqueness of the place.

He, however, complained of neglect of his community by government, attributing it to the fact that the community is in the opposition.

“Government is supposed to provide amenities but once you are not with the ruling party, nobody cares about you. They should keep politics apart and do the needful. Kabong is very vast and if the government should consider party loyalty, then we can never get it right”, he warned.

Meanwhile, apart from the assorted alcoholic drinks, both traditional and modern, mostly cheap and some fairly expensive, you have assorted meat and food to compliment at any time of the day and especially at night when it’s peak business period. Delicacies like roasted and spiced pork, beef, mutton (goat meat), fish and dog meat (404), which is favourite for the Plateau man, are readily available and affordable.

One very exceptional case of the hospitality business is a food business run by a non-native woman popularly known as “Mama G”. The unique aspect of this joint is that the outlet runs at 9 pm when most food joints are about closing for the day. Mama G  sells hot rice and stew, Moi-Moi, spaghetti, pepper soup and so on. It, however, looks like her target is mostly beer drinkers who on their way home, take advantage of the freshness of the food to help themselves.

The brisk seller of food told this reporter the secret of her business and the challenges she is facing. “Why I sell in the night is because in the morning there is food everywhere and at that time of the night, people don’t have other choices”. She explained the secret of her brisk business at that time of the night. “People say the food has a taste and is cheaper. I don’t believe people who patronize me are only beer drinkers. Little children and families come too”, she added.

On the challenges she is facing, Mama G said, “These days the market has gone down because of area boys who have driven customers away. People are afraid of entering Kabong. In the past, we use to have people Farin Gada, Anglo-Jos and other parts of the city but now it is not the case. The government should help us. In the past I even have to settle those area boys with food and money”, she disclosed.