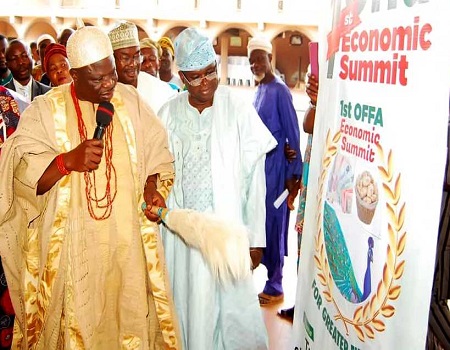 By all standards, the summit was a brilliant initiative for a community that is begging to be transformed. The snag, however, is how to walk the talk by breathing life into the summit’s recommendations. If the idea is for the interest of Offa to be better served, there is the need to consider a political arrangement that will ensure the emergence of a successful, trusted and contended indigene of Offa to execute the chairmanship of Offa Local Government! At a time funds are remitted directly in local council accounts, it makes no sense to handover the till to a malleable individual!

Of course, some may dismiss this suggestion as wacky by questioning the rationale behind drafting a prominent son or daughter of Offa to climb down to occupy the ‘lowly’ post of a local government chairman! Still, there is nothing wacky about the proposal. Some three decades ago, the globally-recognised Professor Jamiu Oyawoye, MFR, the most prominent son of Offa and the town’s best known ambassador, made a similar suggestion. Baba Oyawoye said then that one way to ensure local councils play their roles effectively is for communities to identify and draft some of their best sons and daughters to assume chairmanship and councillorship posts in their places of birth.

Anyway we look at it, the suggestion is one sound way of promoting good governance at the grassroots. With the abrogation of the obnoxious joint account system by the Buhari/Osinbajo administration, it appears this is an idea whose time has come. Henceforth, federal funds are to be remitted directly into local government accounts without any overbearing political leader breathing down the neck of council chairmen! To give meaning to this and ensure funds are effectively applied, it behoves on communities to ensure that local councils are run by people who can make a clear distinction between council accounts and private accounts! Thankfully, several Offa indigenes fit the bill.

One of them is Alhaji Najimudeen Usman Yasin, the immediate past president of the NURTW or National Union of Road Transport Workers. Indeed, if the NURTW was a registered political party, the union would have had no problem in getting Alhaji Najimudeen Usman Yasin into an elective office. Two facts support this optimism. One, with members running into millions, NURTW is the largest single affiliate of the Nigerian Labour Congress, NLC; and, two; over the past five decades, the former NURTW president has acquired rare organizational skills that only high achievers are noted for. This is an aside, though.

This proposal may be at variance with the popular view that a community’s best ambassadors should be donated to the nation! It may even anger those who think the chairmanship of Offa local government area is too low an office to be occupied by the NURTW president. But, sentiments apart, Alhaji Najimu Yasin will positively affect more and improve fortunes if he exercises executive powers over the affairs of Offa local government area. Aside empowering an individual and placing them in the spotlight, very few benefits come to communities that donate their best hands to the nation.

For a man whose rise to the top has been dizzying so phenomenal, what spotlight is Najimudeen Yasin seeking either as a minister at the national level or even as the governor of a state? Except, of course, in the unlikely situation of his being donated to the world as Secretary General of the United Nations, a post that also comes with no direct benefit to the community of the occupant of the office. Compared to walking the talk for Offa, there will be very little benefit, if any, if Najimudeen Yasin is donated to the country or to the state. Offa will reap no benefit, either directly or indirectly, if today the former ODU president general is appointed a minister or commissioner!

For Najimudeen Yasin, running the affairs of Offa LGA and keeping watch over its finances will be the ultimate icing on the cake.  There should be no surprises here! Alhaji Najimu Yasin has not looked back since the early 1970’s when his organizational skills became noticed in Gusau when he single-handedly organised commercial vehicle drivers into a formidable union in the old Sokoto state. He has since then remained a worthy ambassador of Zamfara state and, indeed the old Sokoto state. It was this rare organizational skill, out of many, provided the Makman Gusau the solid platform to pioneer the formation of the NURTW as it is known today.

Specifically, Najimudeen Yasin was outstanding in the area of rehabilitation and empowerment of NURTW members. As it stands today, the NURTW has made it convenient for members to take advantage of services rendered by the National Open University of Nigeria and allied long distance programmes. This made it possible for members to return to the classroom.  To strengthen the rehabilitation and empowerment scheme, the NURTW entered into agreements with financial institutions to provide needed support for members.

This is a clarion call on Offa Elders and Leaders of Thought to persuade their prominent son, who has distinguished himself as a transformative leader on the national stage, to return home and improve the fortunes of Offa. On his part, Najimudeen Yasin should consider it an honour and, a personal challenge, to ensure that the outcome of the Offa Economic Summit does not gather dust on the shelves at the ODU headquarters.

It will be a major setback if Najimudeen Yasin demurs at the suggestion to spearhead the effort to transform Offa!