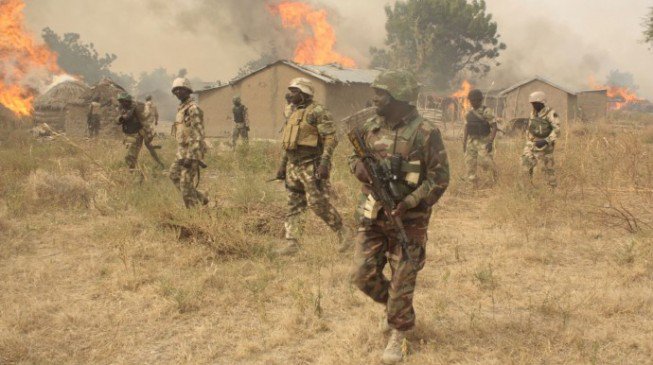 It started as a child’s play in 2009, it was treated with levity. It was encouraged for steady growth. It is now a full-blown war. It is now seriously feasting on the nation’s economy. It is destroying the fibre of unity and peaceful co-existence at a fast lane. From the look of things, the end of the insurgency is not at sight in Nigeria unless hands are sincerely joined to chase the monster from the land irrespective of where it thrives most.

The insurgency has raged on for more than 10 years. And when it appears that the vestiges of the insurgents are finally being erased, they rise again like the phoenix from the ashes – to become stronger, more coordinated and more ubiquitous. It is a grand delusion to assume that the machinations of these deviants do not have insider abutment.

About 1,400 Boko Haram suspects were released since the launch of Operation Safe Corridor in 2016. This is a programme for “the de-radicalization and rehabilitation” of ex-Boko Haram fighters. A source close to Defence Headquarters confirmed the release of the suspects, adding: “About 800 former Boko Haram fighters who would have unleashed unimaginable terror on innocent people had been admitted and out of which 287 were successfully rehabilitated and reintegrated into the larger society, with many still undergoing the DRR programme”.

Honestly, this does not add up. The insurgency is still at an eruptive and volcanic stage. Why then the release of adversarial actors in the heat of a war? From my understanding of the rules of war, enemies and combatants including collaborators are often released at the end of hostilities or for the purpose of genuine negotiation. Even soldiers have expressed mortification over the release of their deadly adversaries and alleged complicity by higher authorities.

How do you release the suspects and ensure they do not go back to their pastime of bloodletting? How do you really know they have been de-radicalized and distanced from their past evil thinking?

For instance, Shu’aibu Moni, a Boko Haram commander, was released – though by a prisoner swap deal in 2017. He hurriedly rejoined his brothers- at-carnage, bragging to wreak more devastation on the peaceful citizens. And true to his pledge, his group went on a bolstered rampage afterwards.

Again, how do you de-radicalize and indoctrinated terrorist within few months? Quoting from an interview granted to Daily Trust Newspaper as published on February 8, 2020, by the Chief of Army Staff, Lt. Gen. Tukur Buratai, he stated that 10 years was not even enough to de-radicalize an indoctrinated person.

Hear him: “It is an indoctrination that has taken roots between 10 and 40 years back. And for you to de-radicalize an individual to bring him back to sanity, you think it would just take you three years, four or 10 years?

“These are people that we’re brainwashed to believe that when they die, they would go straight to heaven. And you think they would believe in you to bring them back to mix with people they refer to as unbelievers? You have to look at this context”.

From the quoted part of the interview, why then the hurry to release already indoctrinated Boko Haram suspects to join the larger society within a few months of de-radicalization? What was the instrument used to certify them as truly de-radicalized and not pretentious to regain freedom for better planning?

One strongly believes that this is where the fatal failure of the Buhari administration in the war against insurgency lies and deserves further study.
How do you explain these absurdities? Capture the terrorists, “rehabilitate” them within few months, and then, release them back into the wild to continue from where they left off.

Repeat the cycle, and the war goes on and on. This is part of why if Boko Haram jams luck to capture a soldier, it makes a spectacle of the killing. The Chief of Army Staff has said that Boko Haram cannot be wiped out; so, the war enterprise must keep wheeling. What then has he got to offer as Option B? Should Nigerians then believe that the present Service Chiefs are not capable of wiping out Boko Haram despite the huge budgetary allocation? Your guess is as good as mine because we are in a big mess.