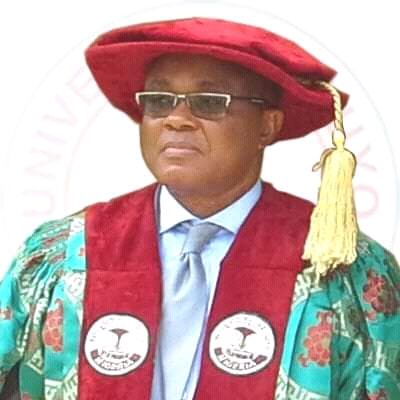 A damaging sex scandal has kicked out the immediate past Vice-Chancellor of University of Uyo (UniUyo), Professor Enefiok Effiong Essien, from a hall of fame of 60 eminent persons who were born in the year of Nigeria’s Independence.

The Compendium, an initiative of Project60@60.org mirrors nation-building through the administrative, arts & culture, economic, professional, political, philanthropic, religious, security, and scholarly contributions of the eminent persons so chronicled.

The Nation Builders at 60 is a special publication which aims at celebrating outstanding individuals who have distinguished themselves in various fields of endeavour and contributed immensely to the Nigerian project.

The 60 individuals share a common bond with Nigeria by their birth in 1960, the year Nigeria gained independence from the British colonial rule. It is also aimed at educating Nigerians about the rich and diverse cultures and experiences of the various people in Nigeria.

The objective is to understand one another so that we can live together peacefully as a country. The publication will help to promote mutual understanding, foster inter-group harmony and tolerance, advance national cohesion and integration, and encourage peaceful co-existence as well as inspire the younger generation.

‘’Celebrating Nigeria: The Nation Builders at 60” celebrates the gorgeous mosaic that is Nigeria.

These shortlisted 60 Nigerians that are featured in the Compendium have distinguished themselves through diligence, hard work, and patriotism to their fatherland and most importantly contributed immensely to national development. It should be noted that these set of Nigerians witnessed and survived the Civil War and through perseverance thrived and grew along with Nigeria.

The independent initiative identified Nigerians who have distinguished themselves through hard work, patriotism, and service to their Fatherland.

‘’By making us understand the contributions of these eminent Nigerians, we will come to appreciate the uniqueness of these unique Nigerians and the challenges they have surmounted to reach their present status’’, the group says on its website.

However, Essien was packaged as a proverbial cat with nine lives. But, he failed to scale through the final selection process because of the sex scandal stigma.

William Shakespeare, the legendary English poet, famous also for his plays, refers to the nine lives myth in his play Romeo and Juliet. There is also an ancient proverb that claims, “a cat has nine lives. For three he plays, for three he strays and for the last three he stays.”

Some people believe the nine lives myth is related to cats’ ability to always land on their feet. Cats are also known for their dexterity and agility.

Over time, people experienced cats survive in situations that surely would have seriously injured other animals. Some people likely began to believe that cats must have multiple lives.

Unfortunately, the cat nine lives myth did not sit well with Professor Essien, though he later became the VC of UniUyo.

In 2005, he was indicted by the Court of Appeal, Calabar, the Cross River State capital, of sexual misconduct against a student after expulsion from the university.

During the period of the incident, Essien who was born on January 29, 1960, in Ibiono-Ibom Local Government Area of Akwa Ibom State into the family of Effiong Okon and Ayie-Ubok James Essien, was an invigilator and head of the examination malpractice panel.

He allegedly swayed vote against the female student involved.

The court of appeal after asking Essien to swear an affidavit to counter the student’s accusation, refused. With accusations against him not being challenged the court took a unanimous decision that he was guilty of sexual misconduct and tampering with examination panel.

But, after several investigations and hearings, he was exonerated. And, almost 10 years after the alleged damaging sex scandal, he was appointed Vice Chancellor of UniUyo. The university under his watch allegedly became a dreaded centre of cultism, and unimaginable vices.

He is a lawyer, and a law professor of law who specialises in International Humanitarian Law, Land Law, Commercial law, Law of the Sea, Secured Credit Transaction Law.

Until his appointment as the VC, Prof. Essien served in various capacities as a commissioner in Akwa Ibom State Government. First, he was Science and Technology Commissioner, and later Education Commissioner.

The Pro-Chancellor and Chairman of the Governing Council of UniUyo, the late Prof. Kimse Okoko, who was a prominent Ijaw leader, and a scholar with a radical orientation of the ideological left, had said the process leading to the appointment of Prof. Essien as VC-designate was transparent, stressing that relevant laws were duly observed.

Addressing journalists in Uyo, the Akwa Ibom capital, Okoko said he was disappointed to read a report in three local tabloids alleging that the university Council collected a N200 million bribe to favour Prof. Essien.

The chairman frowned on what he described as junk journalism aimed at tarnishing his long-earned reputation. He explained that no petition was received from anybody or group against the vice chancellor-elect in the course of the exercise.

“The only petition against Professor Essien at the time was treated by the Selection Board during the interaction session”, Okoko said, pointing out, ‘’the process for the appointment of a new Vice-Chancellor which commenced on April 28, 2015, was concluded in October 2015, with the appointment of Professor Essien, as the VC after a very painstaking, thorough and an uncompromisingly transparent process.

“Following the successful conclusion of the interaction exercise, the Selection Board, in line with the University [Miscellaneous Provision] Act 1993 and [Amendment] Act 2003, Section B, recommended the best applicants to the governing council for the appointment of one of them as Vice Chancellor. The three candidates in order of ranking are Professor Enefiok Essien of UniUyo, Professor Ben E. A. Oghojafor of UniLag and Professor Okon A. Ansa, UniUyo.

‘’After a voting process, the number one candidate in the person of Professor Essien, recorded the highest number of votes. He was thereafter approved by the Governing Council as the incoming Vice-Chancellor at the end of the tenure of the out-going Vice-Chancellor in November 2015.’’

Former President Goodluck Jonathan, in his condolence to the Okoko family, described him as his personal friend. Jonathan further described him as a distinguished scholar and accomplished activist.

“I am deeply saddened by the passing on of my personal friend Prof. Kimse Okoko, which sad event took place on Sunday, September 13, 2020’’, former President Jonathan said.